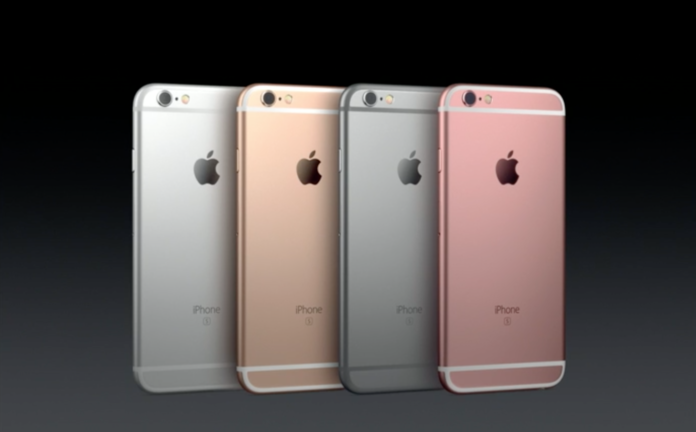 The iPhone 6s comes in four colors: Space Gray, Silver, Gold, and Rose Gold. All four of these finishes look beautiful on the iPhone, and Apple has made sure even the screws at the bottom to the side of the lightning connector are color matched. This is attention to detail, something Apple customers pay a premium for. The iPhone 6s is a masterpiece of design, save the ugly but necessary antenna lines. The front is stylish and almost the same as the iPhone 7’s.

The iPhone 6s houses the powerful Apple A9 chip, with a 1.84 Ghz Twister, and 2GB of RAM. Thats a faster clock speed than my Macbook Air! While theses specs don’t look too impressive on paper, in the real world, they perform much better than many android phones with more impressive specs. Here’s why: Apple’s iOS is VERY refined, and since there are so few phones that run iOS, Apple can spend all their time optimising the software for one phone, instead of handing that over to 3rd part vendors, like google does with their operating system, android. In addition, iOS is much lighter than android, which has many more processes running in the background, slowing down the phone. The phone houses some pretty good cameras. The rear-facing camera is a 12 megapixel shooter capable of shooting 4k video at 30fps, or 1080p at 60fps (more on that later), while the front-facing camera is 1.2 megapixels, and shoots 720p videos at 30fps.

The big new features: 3d Touch and the Retina Flash

3d touch is much like the force touch debuted on the 13 inch 2015 MacBook pro. If you don’t know what that is, the screen detects both where you touch the screen, and how hard you press it. This allows for things like games which steer according to how hard you press, and the “peek and pop” feature. When in mail, or other page based apps, you can “peek” at the link you’re about to press, like if you were to “peek” at a mailer, and then let go to return to your mail. This means you’re able to look at information quickly, and then get out of the information quickly as well. I found this mainly to be useful on the mail app, and in safari. 3d Touch on the iPhone seems like a gimmick, and at first it was. However, with iOS 10, 3d touch becomes a lot more useful. It isn’t obtrusive either, and you learn easily and effortlessly to use it. Things like going to the battery settings quickly and opening an app to the exact page you want is really handy, and I’m sure that with iOS 11, 3d touch will be even more useful.  Retina Flash is another feature on the iPhone that while isn’t that interesting for me, could be awesome for many night-goers looking for that perfect low light selfie. The retina flash essentially displays a white screen, with the brightness at 3x maximum brightness to act as a flash. This works surprisingly well, especially when you’re close to the camera.

The 12 megapixel shooter on the iPhone 6s is a very good camera. While it doesn’t have the depth of field of a DSLR or even a normal camera, it shoots well in both high and low light conditions. Camera apps like Focus allow granular control over the focus, ISO, and shutter speed of the iPhone, meaning you can capture very fast moving objects without blur, as long as there is enough light. The iPhone 6s can take 4k video at 30 frames per second, or 1080p at 60. I use 1080p at 60 frames per second, as it enables video stabilisation. A shaky video is the most glaring sign of a bad cameraman, and the video stabilisation works relatively well. As well as video stabilisation, 1080p at 60fps means that video is a lot smoother, and makes for a easier viewing experience.

This is where the praises end. The battery life on the iPhone 6s is better than many android phones, but nowhere near the battery life of the 6s plus. In addition, the battery capacity has been reduced from 1810Mah on the iPhone 6, to just 1715Mah. Combined with the battery sucking Taptic engine and just a few rogue apps like the infamous Facebook app, the iPhone 6s’ battery life is less than ideal. As a moderate-heavy user, my battery is usually at 20% by 5:00pm, which is about 7 hours of day-to-day usage, most of which is locked. According to Apple’s statistics, I’d be better off constantly browsing safari with no lock time, which supposedly yields 10 hours of battery life. I find 10 hours to be ridiculously exaggerated, as even in my own testing, with almost everything off, I’ve gotten a maximum of 6 hours. The iPhone 6s Plus is a whole ‘nother beast. It’s got a much bigger battery, and many people can get their 6s+ to last over two days of mixed day-to-day usage. Luckily, low power mode extends the battery life by about 20%, so I can get just under 12 hours of mixed day-to-day usage on lower power mode. Keep in mind that during this time, the screen is on for only about 4-5 hours. By comparison, the iPhone w7 has around 30% better battery life, so if you’re a heavy user, go for that.

The iPhone 6s has a headphone jack, unlike the iPhone 7. Many see the lack of a headphone jack in the iPhone 7 a big deal, but personally I don’t. I have Jaybird Freedoms, which are bluetooth earphones. They’re amazing, and with the added freedom I get from having no wire attached to my phone, I’d never go back to wired earphones. The only complaint I have with bluetooth earphones is the lag, so watching youtube videos can be a bit weird. If you’re an audiophile, you probably won’t even be using the built in iPhone 6s headphone jack and DAC, but I can report that the DAC inside the iPhone 6s is marginally better than the DAC in the Apple Lightning to 3.5mm jack adapter required to listen to wired music on an iPhone 7.

The iPhone 6s is obviously beautiful and thin, but its bevelled edges mean that the glass could be the first point of contact for a drop. This means that even waist height drops can shatter the glass. On top of that, the series 7000 aluminium is incredibly slippery, especially when wet. I’ve almost dropped my phone a few times while trying to rotate it out of a youtube video. It’s scary slippery, and I’d recommend anybody to buy a case or at least a skin for it. However, multiple tests have shown the iPhone 6s doesn’t bend, like its predecessor, the iPhone 6.

Which one should I get?

I bought the iPhone 6s with 64GB of storage in space grey before the 7 came out. My iPhone has about 15GB of K-Pop on it, and 5GB of iCloud Storage photos. I also have a few apps, totalling about 7GB. Combine all of that with the ~3GB that iOS takes, I’d just be able to survive with the new 2016 version of the iPhone 6s with 32GB. However, I’d recommend 128GB if you don’t want to worry about storage. 64GB is plenty for me, but that option isn’t available in 2017, only 32,128, and a ridiculous 256GB. 256GB of storage is more than even the entry level Macbook Air and 2015 Macbook Pro. I doubt anybody would need that much, especially at the exorbitant prices that Apple sets for storage upgrades.

The iPhone 6s is still a fantastic device in 2017, with ultra fast speeds and an awesome camera. Force touch and the Taptic engine provide a new way with interacting with your phone thats useful and fun. If you need to be on the bleeding edge, get the 7, or wait for whatever’s comes out in September. The only thing letting the iPhone 6s down is it’s battery. If you need it to last all day and then some, get the iPhone 6s Plus. Apple has brought the price of the 6s down, so now would be a good time to buy it.

You can save even more money by buying it with the discounts applied at Amazon.com by clicking here. Yep Amazon is even the cheapest for iPhones… who would of guessed.