Becky G has had a lot of success in the entertainment industry, as a musical artist, a model, and even as an actress. Most recently, she made headlines for her portrayal of Trin Kwan in the action movie Power Rangers, which just released a short while ago. Becky G may only be twenty years old, but she has already amassed a loyal and dedicated fan base, with many of her fans having witnessed her rise to prominence first hand. Becky G is known to interact with those fans on occasion, through social networking sites like Twitter, Facebook, and Instagram.

Rebecca Gomez aka Becky G is from Inglewood, California and was born in March of 1997. Growing up, her and her family suffered from a lot of financial trouble. In order to help contribute financially for her family, Rebecca was taking part-time jobs and doing small entertainment related roles. At a very young age, however, she decided that her dream and goal was to build a career in the music industry. Since she was working in entertainment at such an early age, Gomez found that she was a target of a lot of childhood bullying. As a result of this bullying, she was forced to pull out of public school. One of the first successes that she found in entertainment came in 2009, when she joined the girl group G.L.A.M.. Like many other aspiring artists, Gomez would also use YouTube to publish covers of songs.

Some of Becky G’s most notable covers included covers of songs Otis, Lighters, and Novocane. She originally meant to put these covers on her debut mixtape, titled @itsbeckyg, but these tracks ultimately got into the hands of some major producers, most notably Dr. Luke. Luke was very impressed by what he was seeing from Rebecca, and her work prompted him to sign her to Kemosabe Records, which is a part of RCA Records. With this major contract, Gomez began to work on her debut album. Although she may have been able to find a fan base by releasing a mixtape, I don’t think that it can be denied that this signing was a pivotal moment in her music career. 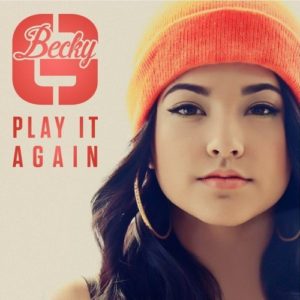 The first of Becky G’s music to really take off was the track “Oath”, which was released in 2012 as the fourth single to come from Cher Lloyd’s debut album. “Oath” was very well received and charted on the Billboard Hot 100. Her first real studio track, “Becky from the Block” released in 2013, and the majority of its music video was recorded in Rebecca’s own neighborhood. Her next hit was released the same year and titled  Play It Again. The lead single for her upcoming debut album, “Shower”, was released in 2014, and it did pretty well for itself, even on an international level. Due to her increasing renown, Gomez saw her influence in the music industry expand. She opened for Katy Perry at certain points during Perry’s Prismatic World Tour.

More recently, Becky G made international headlines by portraying Trini Kwan, the Yellow Ranger, in the blockbuster film Power Rangers, which just released in March of 2017. In Power Rangers, the Yellow Ranger is highly suggested to be queer. This was obviously a major change to the beloved franchise, and it surrounded Gomez in a lot of attention, the majority of which was positive. Her role in this film was basically the first major movie that she had appeared in, and so it’s encouraging that reception would be so positive. Gomez has yet to release that highly anticipated debut studio album, but the single “Todo Cambio” was released this past March. This is the third single to precede the album’s release. Although Becky G is pretty new to the entertainment industry as a whole, I think it’s safe to say that she has had a very strong start. 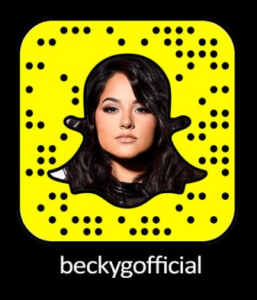 Facebook is probably the biggest social networking platform out there, so it isn’t much of a surprise that Becky G would have an official Facebook account. You can find her account by looking her up under the username @iambeckyg, or simply by clicking the link here.

Are you interested in following Becky G on Twitter? If so, then you can just look her up under her Twitter handle, which is @iambeckyg. If you’re not in the mood to do that, then you can still check out her Twitter account by clicking the link here.

Like many other celebrities, Becky G is an active user on Instagram. You can check out what she shares with her millions of followers by searching for her under @iambeckyg, or by clicking the link that I’ve included here.

If Becky G has a Kik, then she apparently hasn’t felt inclined to share it with any of her fans yet. As of this writing, she has not made any of that information publicly available. So, if you’ve encountered someone on Kik who is claiming to be Becky G, then you may be being fooled.