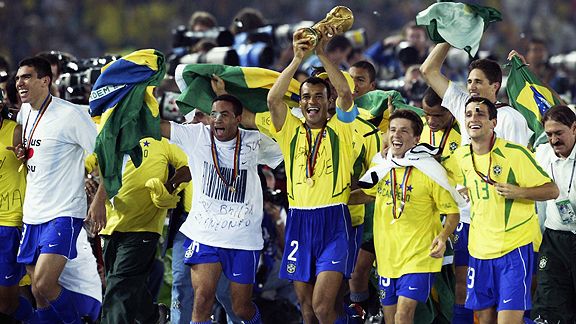 In 2002, Brazil was nearly unstoppable with a squad that had many big names, including Ronaldo, who had already reached the World Cup final in 1998. The team had tough opponents throughout the tournament but the team had a great run, defeating Germany 2-0 in the final for its fifth World Cup trophy. Brazil has won a few tournaments since but fans continue to remember this squad as most of the matches had good goals and plays from Ronaldo, Rivaldo and Ronaldinho. It’s been 15 years since Brazil won the World Cup and while the team has recently impressed in the World Cup qualifiers, fans have not forgotten about this squad. Where are they now? Most are now retired but some are involved in the sport and have even appeared in the most recent World Cup. Here are all the stars of Brazil’s 2002 squad and what they are doing now:

Marcos allowed only four goals during the World Cup and is often mentioned as one of the best goalkeepers in the history of Brazil’s national team. After the 2002 World Cup, he continued to play for Palmeiras. He remained with the same team his entire career and retired in 2012.

The 2002 World Cup was only the beginning of Ronaldinho’s career, which began catching the attention of all fans during his time in Barcelona. Ronaldinho was nearly unstoppable at times and was even applauded by Real Madrid fans at their own stadium during a game. After his time at Barcelona, Ronaldinho played in Italy, Brazil and Mexico. He is now an ambassador for Barcelona. 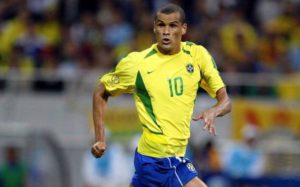 Rivaldo was impressive during the 2002 World Cup and his career continued for many more years after that. He is now retired and is the current president of a club in Brazil. Like Ronaldinho, he played for Barcelona before moving to other teams.

After the 2002 World Cup, Gilberto Silva continued playing football for almost 16 more years. The former Arsenal midfielder announced his retirement in December 2015. Silva was playing for Atletico Mineiro before announcing his retirement.

Lucio is currently playing football in India after playing for some of the biggest teams in Europe, including Bayern Munich and Inter Milan. The central defender is just one of the few players from the 2002 World Cup squad that is still playing. 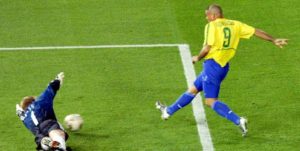 Ronaldo was coming off a World Cup loss in 1998 but that didn’t stop him from scoring the most goals for Brazil in 2002. He scored in almost every game of the 2002 World Cup and two of his most impressive goals came in the final against Germany. The striker scored the two goals that gave Brazil the 2-0 victory and its fifth World Cup. Ronaldo would later move from Real Madrid to AC Milan, where he didn’t play very long after suffering a knee injury. He would later move to Brazil, where he played for a few years before retiring in 2011.

Roberto Carlos would continue his football career for many more years after the 2002 World Cup. He was actually a player-manager of one team after moving from Real Madrid. The left-back is still a popular name around the world as his free kick goals are some of the most impressive in the sport.

Cafu retired six years after the 2002 World Cup and is currently the player with the most national team appearances for Brazil. The two time World Cup winner has continued his support for Brazil after retiring, giving his opinions on the current players and even offering to fill Brazil coaching role after Dunga became Brazil’s manager for the second time.

Luiz Felipe Scolari has been the manager of a few teams since winning the 2002 World Cup. He was Chelsea’s manager back in 2009 and is currently the manager of a football club in China. Scolari was also the manager of Brazil during the 2014 World Cup, a tournament that did not end well for the Brazilian national team as they lost 7-1 to Germany in the semi-final. He resigned as Brazil’s manager shortly after the shocking loss and is now a manager in China.