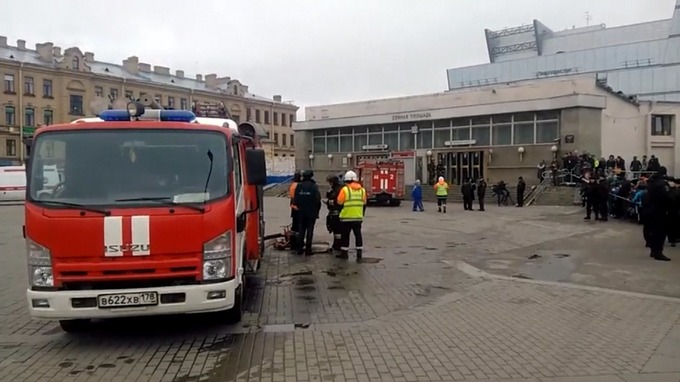 An explosion between underground stations has left 11 people dead and 45 injured. The explosion happened between two stations in the city of St. Petersburg.

Authorities are currently investigating what happened but Russia’s Prime Minister Dmitry Medvedev said on social media that the blast was a terrorist attack.

Ruptly said on Twitter just a few minutes ago that St. Petersburg hospital confirmed that ten metro blast victims were receiving treatment. They added that one more person was in critical condition.

After the explosion, a few images posted on social media showed how the train was left after the explosion. One of the images shows the train on the station with a hole on one of its doors. The first reports mentioned that there had been two explosions but the country’s National Anti-Terrorist Committee said there had been only one explosion. The blast happened at around 2:30 pm local time between the Sennaya Ploshchad and Tekhnologichesky Institut stations.

Russia’s Health Minister Veronika Skvortsova confirmed that ten people had been killed in the explosion. Seven of them died at the scene while one died in the ambulance. Two more died in the hospital but it was later reported that the death toll was raised to 11.

Investigators found another explosive device at the station and reports say the explosion came from a suitcase that was on the train. Authorities are currently looking at security cameras and the explosive they found.

St. Petersburg, a city with a population of 5.2 million people, opened its metro system in 1955. The metro system, which has 67 stations, is considered the 12th busiest in the world. More than two million people use the metro system every day. One of the investigators spoke to Russian media and said that the driver’s decision of not stopping after the explosion helped save lives. He stopped at the nearest train station, which allowed emergency services to quickly rescue the passengers. According to reports, the St. Petersburg metro system was shut down as authorities continue to investigate.