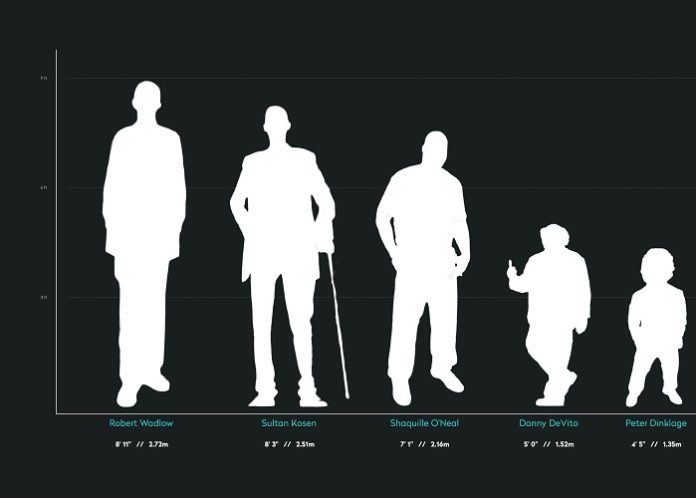 Of all the fantastic creatures that you might find in a Lord of the Rings movie or a role playing game, there’s one that stands out amongst all the rest – quite literally. Dragons, Orcs and Goblins are all mythical and summoned only from our collective imagination, but giants are as real as you or I, and they’re walking amongst us right now.

Humanity has a special fascination with giants, when the tallest man that ever lived, Robert Pershing Wadlow stepped outside, he was followed by crowds of curious and excited onlookers who just wanted to catch a glimpse of the uniquely tall Alton giant as he carried his eight feet eleven inch frame along on his size 37AA feet, but even though Robert Wadlow died in 1940 aged just 22 years old, there have always been those larger than life men who the rest of us can only look up to. But who exactly are the ten tallest giants in the World now in 2018? Follow my relatively tiny size 13’s as we follow in the footsteps of the tallest men alive today. 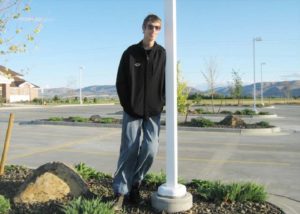 Brendan Adams from Ellensburg, Washington was born in September 1995 and at the age of just two months his parents Willie and Debbie noticed that he was growing a lot faster than they had expected. An inversion in his 12th chromosome at birth, a rare condition that will often result in extreme growth was causing his unusual size and doctors were unable to halt his growth. By eight years old Brendan was 5’ 8, the same size as Tom Cruise, at eleven he was six and a half feet tall and Kobe Bryant sized, a year later he was the same size as Andre the Giant. Brendan was the Worlds tallest teenager and there seemed to be no end in sight to his constant incredible growth, but fortunately in 2008 doctors managed to use high-dose testosterone treatments to stunt his growth, and he ended up at 7 feet 8 inches tall, although doctors estimate he would likely have been well over eight feet eventually if the treatment had not been successful.

Nineteen year old Broc Brown from Jackson, Michigan knows exactly how Brendan must have felt growing up, but his height is yet to slow down. Broc suffers from Sotos syndrome, also known as cerebral gigantism, which is a genetic disorder that can cause extreme growth in childhood and affects one in 15,000 people, although usually it doesn’t last long and many sufferers end up a relatively normal height. Broc was five feet two by the age of five and now has reached the lofty height of 7 feet 8 inches tall, but he is also still growing by as much as six inches every year, and unless that stops soon he could well end up the tallest man in the World within just two years. Although Broc has to deal with constant pain due to a curvature of his spine and other medical problems, doctors who once believed he would not live long past his teenage years now believe that he will enjoy a regular life span.

Sun Mingming is probably no stranger to basketball fans, he played for several minor league teams in the US, including the ABA team Maryland Nighthawks and the USBL team Dodge City Legend before moving on to play in Mexico and Japan. He returned to his homeland China in 2009 to play for the Beijing Ducks and eventually went on to win the Chinese Basketball Association Finals with them in 2012. Sun’s wife, Xu Yan is also a professional basketball player and although she still looks tiny next to her sky-scraping husband, she actually stands an impressive six feet two inches tall. With a combined height of 13 feet 11 inches the Guinness World Records awarded the pair the title of The Worlds Tallest Couple in 2015 in a ceremony in London, England. Sun has had several TV appearances back home in China, predictably always playing giants, and in 2007 he appeared in the Chris Tucker and Jackie Chan action flick Rush Hour 3 where he had the opportunity to show off his immense physical strength.

With China’s huge population it’s no surprise that one of Sun Mingming’s countrymen was recently the World’s tallest man. Bao Xushun was confirmed as the holder of the title by Guinness in 2006 and held the award until 2009 when he lost it to the current holder of the record. The herdsman from Inner Mongolia didn’t suffer a childhood of stares and unwanted attention however, he was of normal size until the age of sixteen when he suddenly experienced a seven year long growth spurt that resulted in his extreme size. Although Bao experiences some difficulty walking, the 66 year old has always enjoyed relatively good health for one who is so tall and he has made a good living from his many promotional and public appearances. In 2007 he met a fellow Inner Mongolian, He PingPing who was claiming the title of the World’s shortest man at the time. Mr Pingping, who measures just two feet four inches tall later lost his claim due to yet another diminutive Asian, Lin Yih-Chih from Taiwan who took the title at a height of just two feet two inches tall.

Exaggerations of the height of very tall men is nothing new, the freak shows would frequently adorn their giants with extravagant headgear and equip them with special shoes that allowed them to claim a few extra inches to entice even bigger crowds, and these days the Worlds tallest man is a title claimed by a Pakistani farmer by the name of Ajaz Ahmed who claims the somewhat unlikely height of at least eight feet four inches tall, which if true would make him the tallest man alive. Unfortunately Ajaz has never attempted to verify his height officially and estimates from Guinness World record officials suggest that his true standing height is more likely to be in the region of seven feet eleven inches tall. Ajaz who is aged 41, suffers from a hormonal dysfunction and claims to still be growing but now in 2018 his claims must be taken as the kind of tall tale that Barnum and Bailey, the kings of the freak shows were all too fond of in the past. 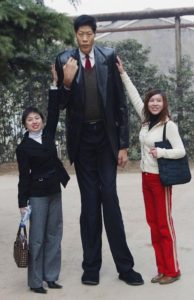 Although Chinese national Zhang Juncai looks down on his countryman and former World’s tallest man Bao Xishun by a good two inches, he has for some reason never been officially measured by Guinness World records officials. In 2010, a year after the current tallest living man took the title away from Bao Xishun, Zhang was measured on a Japanese TV show and it turned out he should have held the title after all, for he was reliably shown to be seven feet eleven and a quarter inches tall. Reliable information about Zhang Juncai is somewhat scarce, his year of birth is reported as anywhere from 1967 to 1983 and apart from his well publicized 2009 hospital visit to the World’s tallest woman, the late Yao Defen who measured seven feet eight inches tall, he appears to avoid the limelight that many of his fellow giants revel in. 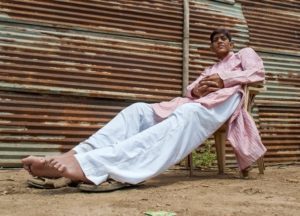 Indian Dharmendra Singh is a sufferer of a rare condition called acromegaly that usually results in extreme height and other medical conditions. Singh, from Uttar Pradesh in India has suffered from a variety of ailments during his 34 years and despite holding an MA degree in Hindi literature has found it difficult to find suitable employment due to his height and the everyday difficulties it causes. In 2015 he was interviewed by Western journalists and bemoaned the fact that he was unable to find a girlfriend due to his extreme height and also that he was only able to get a job in a carnival getting his picture taken next to spellbound tourists, but Dharmendra keeps a smile on his face and says the best thing about being so tall is the happiness it brings others when they encounter his gigantic frame.

The tallest man in Iran is Morteza Mehrzad who is also the Worlds tallest Paralympian. In 2016 Morteza, who was born in 1987, helped the Iranian national team win the Gold medal in the sitting volleyball event at the Rio Summer Paralympic games which makes him the tallest ever winner of an Olympic Gold medal too. Morteza was a relatively normal six feet four inches tall at age 16 but after an accident on his bicycle that injured his pelvis, he suddenly began growing at an alarming rate. Unfortunately Morteza’s right leg didn’t grow with the rest of him and is now six inches shorter than his other leg meaning that he is unable to walk normally without assistance, however other than that he is entirely healthy and plays sitting volleyball in his homeland at club level and coaches other hopeful future paralympians in the sport.

Along with Morteza Mehzrad, the joint second tallest man living in the World today is Moroccan Brahim Takioullah. Brahim, who lives in Paris, France is another giant who enjoyed a completely normal childhood, that is until the age of thirteen when he suddenly began growing at an alarming rate. Brahim, who is officially recognized as having the largest feet in the World, with his left one an astounding 1 feet 3 inches long, suffers from acromegaly but has none of the mobility problems that many of his fellow giants suffer from. He has previously worked as a model, which no doubt helps to cover the enormous price of his gigantic custom-made shoes, which cost up to $750 a pair, and he hopes to land a few giant roles once he gets his first big break in show-business.

Thirty-four year old Sultan Kosen from Turkey is the tallest man alive today, and the fifth tallest human that is known to have lived. Just like Robert Pershing Wadlow Sultan’s great height was a result of a tumor that affected his pituitary gland, but fortunately Sultan benefited from the marvels of modern medical techniques provided by doctors at the University of Virginia medical school. Eventually radio-surgery, also known as Gamma Knife surgery managed to completely remove the tumor but it still took another two years before Sultan stopped growing entirely. By 2012 doctors confirmed the procedure had been completely successful but during that time Sultan had gained another inch or two and finally stretched the tape at an incredible eight feet three inches tall. Sultan, who took the title of the Worlds tallest man from Boa Xishun has the largest hands in the World, at almost eleven inches long and has taken full advantage of his unique status by touring the World since he gained the title in February 2009, and although he tires easily when standing for too long, he otherwise enjoys a completely normal and healthy life.