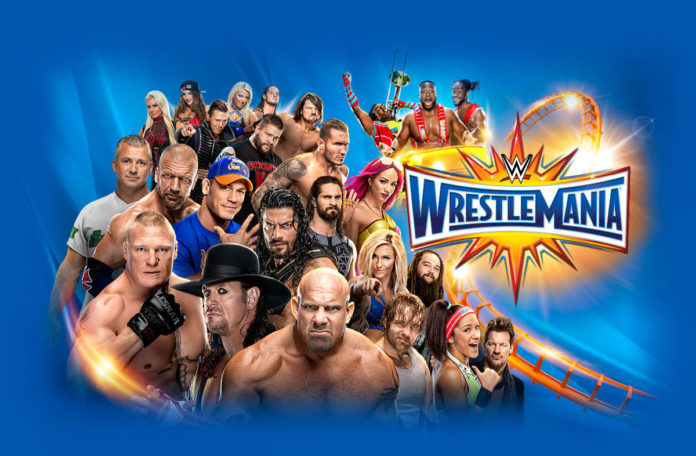 WWE’s biggest event is just a few hours away and fans are waiting to see what happens with all the feuds. Goldberg, a superstar we never thought would return to WWE, is featured in the match for the WWE Universal Championship. WWE SmackDown also has its big match between Randy Orton and Bray Wyatt for the WWE Championship. There are eleven other matches in the match card, including six other title matches. Here is the full match card for WWE Wrestlemania 33: 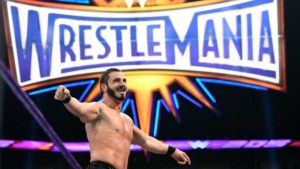 Neville has retained the WWE Cruiserweight Championship against a number of superstars in the division but the feud began when he was being interviewed by Austin Aries, who had been out for months with an injury. Neville told him there was no one left in the division to compete against him but that changed when Austin Aries attacked him. Shortly after, Austin Aries won a number one contenders match at WWE 205 Live to face Neville at Wrestlemania 33 for the WWE Cruiserweight Championship.

The Andre the Giant Memorial Battle Royal is returning for its 4th edition and the match will feature 13 WWE Raw superstars and 16 WWE SmackDown superstars. The latest name to be announced for the match is NXT’s Tian Bing, the first WWE superstar recruited from China. The first name to be announced was Mojo Rawley and the second was Apollo Crews. WWE superstars such as the the Big Show, Braun Strowman and Mark Henry will also be participating in the match.

Goldberg and Brock Lesnar have already faced each other once at a Wrestlemania but tomorrow, the match will be a little different as it will be for the WWE Universal Championship. Goldberg has been unstoppable since returning to the WWE and Brock Lesnar will look to get his first win against him at WWE’s biggest event. It will be the second time these superstars meet in the ring in recent months. Goldberg has defeated his opponents in seconds since he returned but Heyman has said that at Wrestlemania, Lesnar will have the greatest comeback in sports entertainment history.

Bray Wyatt and Randy Orton will be facing each other at Wrestlemania 33 for the WWE Championship. Randy Orton joined the Wyatt Family after losing to Bray Wyatt in a few matches and it seemed like he would not face him for the title. After winning the WWE Royal Rumble earlier this year, Orton said he would not face Bray Wyatt. His announcement was shocking as a match between them sounded like a really good idea. Shane and Daniel Bryan then announced a number one contenders match, which AJ Styles won. After the episode, Orton said he was no longer part of the family. After his announcement, Shane and Bryan made another number one contenders match, which Randy Orton won.

Shane will be returning for another Wrestlemania after facing The Undertaker last year. This time, the match will be against AJ Styles, who was not happy about the change for the number one contenders match after Orton’s announcement. AJ Styles was also not happy about the rematch he was supposed to have after losing the WWE Championship to John Cena. After a heated argument between the two, AJ Styles attacked Shane on the following episode of WWE SmackDown. AJ Styles was fired shortly after the attack but later in the episode, Shane challenged him to a match at Wrestlemania 33. Last week, they had a contract signing for the match and it almost ended in a fight between the two.

The Undertaker vs. Roman Reigns

The Undertaker participated at the WWE Royal Rumble earlier this year but his chances of being the main event at Wrestlemania 33 ended when Roman Reigns eliminated him from the match. The two had a stare down after he was eliminated, letting fans know that a match between them was probably going to happen at Wrestlemania 33. On an episode of WWE Raw, Braun Strowman called out Roman Reigns but it was The Undertaker who appeared. Strowman left the ring but Reigns entered to confront him and that ended up with a chokeslam from The Undertaker to the former WWE United States Champion. In a recent episode of WWE Raw, Reigns attacked The Undertaker with a spear. The Undertaker quickly sat up and taunted Reigns.

In 2015, Seth Rollins and Triple H were part of The Authority and during that time, Rollins was the WWE World Heavyweight Champion. The title run was going well for Rollins but in November 2015, he was forced to vacate the WWE World Heavyweight Championship due to a knee injury. He returned months later but was unsuccessful in his match against Finn Balor for the new WWE Universal Championship. Rollins would have another opportunity to win the title after Finn Balor was forced to vacate the title due to a shoulder injury. During the match for the WWE Universal Championship, Triple H returned and helped eliminate Roman Reigns from the match. It seemed like Rollins would be part of The Authority again but Triple H attacked him. The surprising attack helped Kevin Owens win the title and the feud continued when Rollins lost his spot in the WWE Royal Rumble after a distraction from Triple H’s entrance music. Rollins then made a surprise appearance at NXT TakeOver: San Antonio, where he challenged Triple H to a match. Triple H made an appearance on WWE Raw to respond to Seth Rollins, who was attacked by Samoa Joe during that segment. During the attack, Rollins suffered an injury on the same knee that left him out of action for most of 2016.

Alexa Bliss vs. Natalya vs. Mickie James vs. Becky Lynch vs. Naomi vs. Carmella 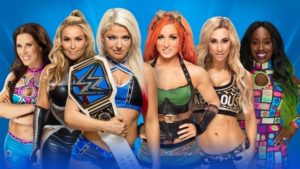 The WWE SmackDown Women’s Championship match will feature not two but six superstars. Alexa Bliss, the current champion, will be facing Naomi, who recently defeated her for the title, and four other superstars, including Mickie James who helped her retain her title after appearing as La Luchadora. Naomi recently won the WWE SmackDown Women’s Championship but she was forced to vacate title due to an injury. Last week, she returned and attacked all participants in the match. She also confirmed that she would be part of the match.

Bayley vs. Nia Jax vs. Sasha Banks vs. Charlotte

In recent months, we have seen matches between all four superstars. But this time, they will all be in the ring at the same time. Nia Jax is the latest addition to the match for the WWE Raw Women’s Championship, which has been held recently by Charlotte, Sasha Banks and Bayley. The current champion, Bayley, recently faced Nia Jax in a match that she lost. The match allowed Nia Jax to earn an opportunity to compete for the title at Wrestlemania 33.

Gallows and Anderson vs. Cesaro and Sheamus vs. Enzo Amore and Big Cass

There will be a ladder match at Wrestlemania 33 but this time it will be for the WWE Raw Tag Team Championships. The teams of Cesaro and Sheamus and Enzo Amore and Big Cass have interrupted each other’s matches, helping Luke Gallows and Karl Anderson retain their tag titles. A number one contenders match for the tag titles was scheduled but the two teams were attacked by the champions during their match. A match between the three teams was then scheduled for Wrestlemania 33.

John Cena and Nikki Bella vs. The Miz and Maryse

Chris Jericho and Kevin Owens helped each other for months and it seemed like this friendship they had going would continue for many more months. That changed when Jericho held a Festival of Friendship and was attacked by Kevin Owens. Jericho then distracted Kevin Owens in a match against Goldberg, causing him to lose the WWE Universal Championship. Owens later explained that they were never friends and that everything ended when Jericho accepted Goldberg’s challenge for at match WWE Fastlane. Jericho later challenged him to a match at Wrestlemania 33, which Kevin Owens said he would accept if it was for the WWE United States Championship. Jericho agreed and the two former best friends will now be facing each other at WWE’s biggest event.

This feud began during the WWE Elimination Chamber, when Ambrose eliminated Corbin from the match. After he was eliminated, Corbin attacked Ambrose, causing him to be eliminated as well. The two continued to attack each other on WWE SmackDown and on an episode last month, Corbin challenged Dean Ambrose for the WWE Intercontinetal Championship at Wrestlemania 33. The following episode, Ambrose attacked Corbin and accepted the challenge.