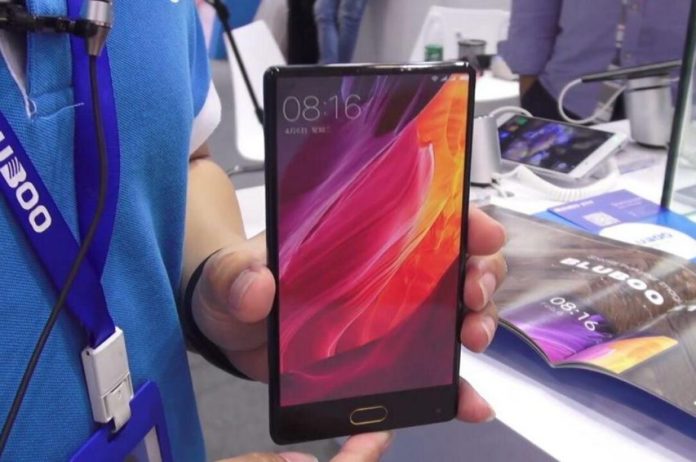 The Xiaomi Mi Mix was one of the most impressive smartphones released in 2016 and it’s been so successful that the Chinese smartphone maker has already confirmed that it is working on a second version. The Xiaomi Mi Mix was just one of a few phones that featured a screen that covered most of the front at the time but that could soon change. In recent weeks, a few companies have been announcing similar phones to the Xiaomi Mi Mix. Some of these phones have a screen that cover most of the front while others are seen as a clone because their design is so similar. Xiaomi Mi Mix look-alikes have been making news as they are not only good looking but also much cheaper. Xiaomi may currently have one of the most impressive smartphones in China but it appears that it won’t be too long before competition arrives. Here are a few Xiaomi Mi Mix inspired smartphones coming soon:

We begin the list of Xiaomi Mi Mix inspired smartphones with the UMIDIGI Crystal. The smartphone looks a lot like the Xiaomi Mi Mix in pictures, with the front camera as one of the few noticeable differences between the two on the front. The front camera on the Mi Mix is on the bottom right corner while the UMIDIGI Crystal has it in the bottom middle. The back of the phone is different as it does not have the glossy ceramic or glass found on the Mi Mix. The most amazing part about this smartphone is that it will be sold for $99. The UMIDIGI Crystal smartphone was unveiled just a few days ago and will be available for purchase on June 15.

The Doogee Mix is coming soon but there’s already a lot of information about the phone. The phone was officially announced last month and while it reminds us of the Xiaomi Mi Mix, Doogee’s upcoming product does have its differences. The Doogee Mix has a button on the front and a dual camera on the back. The dual cameras are found on the top left corner, which is different from the Mi Mix as that phone has its camera on the middle with the fingerprint scanner under it. Here is a video from the Charbax YouTube channel, which shows the specs and a Doogee employee giving information on the upcoming smartphone:

The Bluboo S1 is maybe the most similar to the Xiaomi Mi Mix, especially when you see pictures of the phone with the same wallpaper. The Bluboo S1 does have a home button on the front but it quickly reminds us of Xiaomi’s release because it has the gold color used on the more expensive version. The phone has a dual camera like most on this list and will be hitting the market next month for around $150.

The Hotwav Flames looks a lot like the Xiaomi Mi Mix but on the back. The phone is mostly all screen on the front but there is a little space at the top and bottom. The front camera can be found on the top unlike the Mi Mix’s, which is located on the bottom right corner. The similarity between the two is on the back, with the camera found on the same spot. The fingerprint scanner is also located right under the camera. The only difference is that the Hotwav Flames has a dual camera. The phone is said to be coming in June at a price of $150. Here is a video about the phone from the Notebook Italia YouTube channel:

Elephone caught the attention of everyone last year with the release of the Elephone S7, which looked similar to the Samsung Galaxy S7 but at a very low price. The smartphone started at just $139 and even though it was not as good as Samsung’s release, the company is now catching the attention of everyone with the Elephone S8. The upcoming smartphone looks great from the images and information revealed in recent weeks. Elephone has impressed in recent months with phones at low prices and great specs but the Elephone S8 could be its best release yet.

What do you think about these phones? Let us know in the comments.