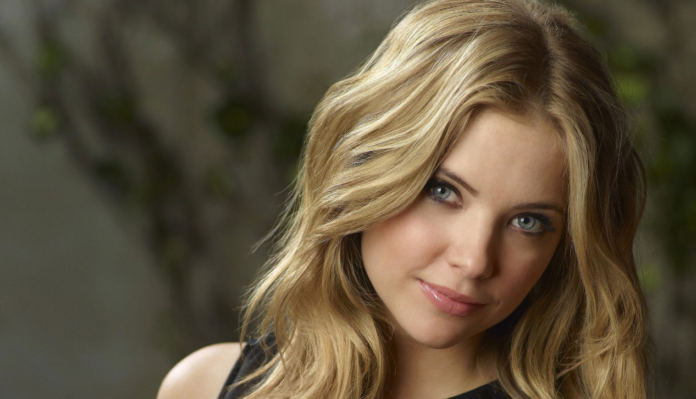 Best known for her part in the television series Pretty Little Liars, Ashley Benson is a 27-year-old American actress. In addition to playing had a mayor and on Pretty Little Liars she was also a favorite fan character on the soap Opera days of our lives. Most of Ashley’s other work has been as an extra in various popular TV shows, as well as the lead love interest in several music videos.

How Ashley Benson Got Famous

Ashley Benson was born on December 18, 1989. She spent her childhood in Anaheim Hills in Anaheim California. She’s not the only famous member of her family. She leaned Benson used to be a member of the cheer squad for the LA Lakers. Ashley’s parents, Shannon and Jeff Benson, started her in competitive dancing at age 4. The talented child competed in four different types of dance – jazz, ballet, lyrical, and hip-hop.

At the same time that she was doing competitive dancing, Ashley Benson was also asked to try out to sing solo at several Christmas services in her hometown church. Ashley started her modeling career at age 5 for dance catalogs. Just three years later at the age of eight, she was signed by the Ford modeling agency for print advertisements.

In the late 1990s, Ashley Benson knew that she wanted to pursue an acting career, so she made an appearance in numerous commercials. Once she got the hang of the commercials, Ashley Benson got a role in a Lil Romeo music video in 2002. She was an extra on the Nickelodeon show Zoey 101 in March 2005.

In 2004, Ashley Benson’s acting career started to pick up. This was when she obtained an impressive three-year contract to be Abigail Devereaux on the Soap Opera Days of Our Lives on NBC. Ashley described working on the soap Opera as grueling, as many episodes were films in a day and she did not have much time to herself.

Ashley Benson left Days of Our Lives in spring of 2007 to pursue a career in movies. She starred as Carson in the fourth installment of Bring It On called Bring It On: In It To Win It. To be in the film, Ashley had to go to cheerleading practice. This came in handy when she landed the starring role in a Lifetime original movie in 2008 called Fab Five: The Texas Cheerleader Scandal. After that, Ashley Benson went back to television with the supernatural television series Eastwick, which ran on ABC in 2009.

Later in 2009, Ashley Benson landed the role of Hannah Marion in the popular series Pretty Little Liars. It was at this time that Ashley began to be recognized for her acting talents, receiving multiple nominations and awards for her work on the show. Pretty Little Liars is still running and in its seventh season. In 2016, Ashley Benson 12 Teen Choice Awards for Choice TV Actress: Drama and Choice TV: chemistry.

In her early years of acting, Ashley Benson dated fellow actor Justin Thorne who is best known for his role on Dr. Doolittle three. She has also been rumored to date cord Overstreet, Taylor Lautner, Tyler Blackburn, as well as her co-star Keegan Allen. Ashley is currently dating Ryan Good she’s been in an on-again-off-again relationship with since 2011. Ryan Good has had an impressive career as a producer for the show plonked as well as Justin Bieber’s swagger coach, whatever that means. 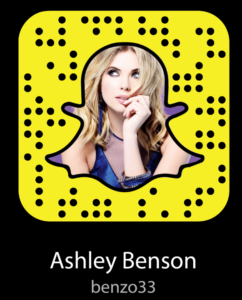 It does not appear like Ashley Benson has a public Facebook profile. Her official Facebook page has almost 5 million followers, and you can become one of them by clicking here. Ashley seems pretty down to earth, and she posts lots of articles from her website XO benzo by Ashley Benson. These items are about such exciting topics as “this is why your hair hurts after you take it out of a ponytail and “five archaic dating rules you should start ignoring ASAP.”

You can find Ashley Benson on Instagram as AshleyBenson or by clicking here. She has an impressive 16.6 million followers on Instagram. She uses the social media platform as a place to post professional photos as well as pictures of pretty landscapes.

Ashley Benson’s Twitter handle is ashbenzo. The actress has over 4.5 million followers on the micro-blogging platform, and she has been a member since April 2009. It looks like this is where she does her personal posting. Recently she commented on the weather in New York and lamented that she should not use Web M.D. because she might be a hypochondriac that thinks she has appendicitis every day. Click here to join her followers for all these exciting updates.

What is Ashley Benson’s Kik Username or Code?

Ashley Benson does not appear to have a personal Kik name.

You can find Ashley Benson’s YouTube channel by clicking here. It only has nine public videos, and it hasn’t been updated in over five years. All of the videos involve her addressing her fans personally. There’s even a video of her dress casually in a T-shirt and a backward baseball cap showing off her dance moves. It’s a fun look into her old life.