The BLUBOO S1 was first shown at the Global Source Fair and has created a fair bit of buzz since. Due to the low price point matched with a high end design and features the device seems to be a hit with consumers. Today images were leaked showing some of the structural design of the device which you can see in the image and video below. 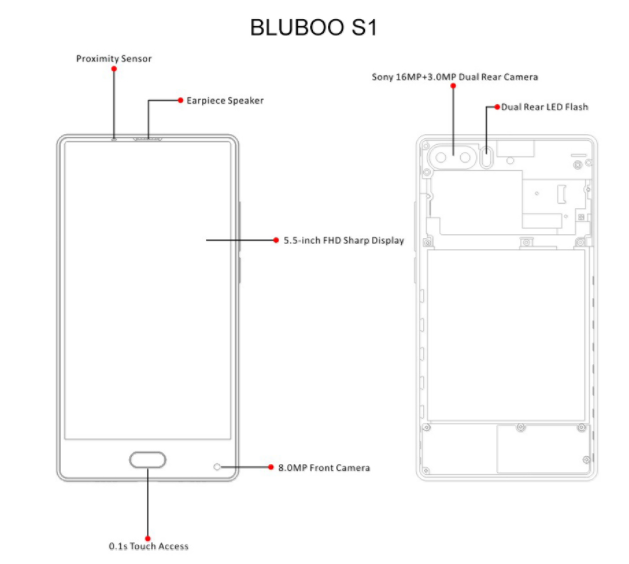 The photo of the front side of the phone shown above showcases the 5.5 inch Sharp FHD display which appears to be nearly edge to edge with barely any unused space.  The only area not covered by the display is the fingerprint scanner and thin edging. Additionally the speakers, 8 megapixel camera, and proximity sensors are extremely small which should make for an even sleeker look.

The back of the phone is also very clean and modern with 2 cameras on the upper left of the frame. These include a 3 megapixel and 16 megapixel camera. There are also a couple LED lights that are used for high end flash when needed.

Overall it looks like a pretty impressive device. Being powered by the Helio P25 processor is pretty impressive as well at this price. Add in the either 4 or 6 GB of RAM & up to 128 GB of storage and you’ve got a winner on your hands. The device looks set to release in June of this year.