CCTV Catches Nurse and Surgeon Fighting During An Operation 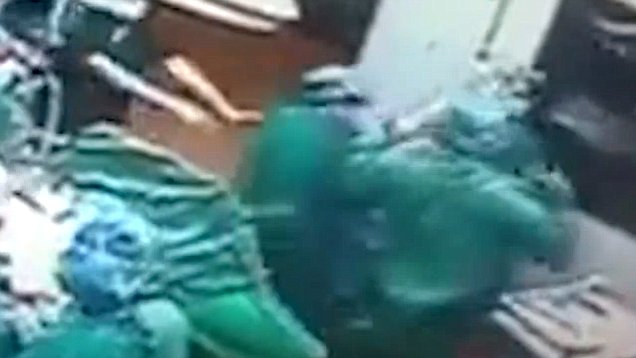 Surgeons and nurses are supposed to be doing all they can to make sure operations go well. But in one hospital in Henan, China, the operating room saw a fight break out between a surgeon and a nurse. According to reports, the nurse is actually the surgeon’s girlfriend.

Before the fight begins, the two appear to be having an argument. Things get out of control in the operating room when the surgeon takes off his gloves and throws them at the nurse’s face. She quickly responds by punching him in the face but things then quickly get chaotic when he punches her several times. He continues to punch her until she collapses outside of the operating room. It then gets difficult to see what happens as they step out of the operating room.

The 45 second video ends with two of the surgeons continuing the operation while a third is seen talking to the others outside of the operating room. Local media reports that a local police officer claimed the operation had ended when the incident occurred. Details about what happened after the fight have not been confirmed but it appears that the operation was still going on during the incident.

Police have also not revealed why the fight began but several news sites have reported that the nurse that was repeatedly punched by the surgeon was actually his girlfriend. According to news site AsiaOne, the argument started when the surgeon accused the nurse of not following procedures.

The hospital is still investigating the incident but has confirmed that the nurse and surgeon did not suffer serious injuries during the fight. The fight reportedly happened on May 12 but the surveillance footage was revealed just a few hours ago.

Here is the surveillance footage: