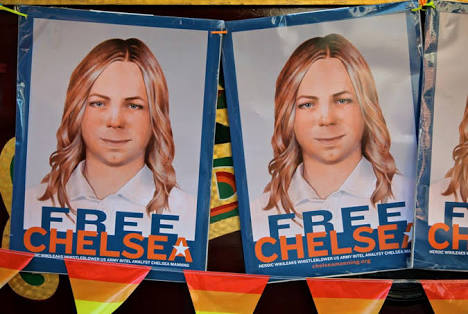 Chelsea Manning has been released from Leavenworth prison after serving seven years of her 35-year sentence. She was convicted of passing classified information to WikiLeaks, but was commuted by Barack Obama as one of his final acts as President.

Donald Trump called Ms. Manning, a former intelligence analyst, an “ungrateful traitor” following the decision, claiming she “should never have been released from prison”.

Ms. Manning told ABC News: “I appreciate the wonderful support that I have received from so many people across the world over these past years.”

“The past will always affect me and I will keep that in mind while remembering that how it played out is only my starting point – not my finals destination,” she added.

Her departure from Fort Leavenworth military prison in Kansas was confirmed by a spokesperson for the US Army to the BBC.

Ms. Manning said in her final tweet before leaving jail that she was looking forward to “the freedom of civilian life”, before criticizing Donald Trump’s healthcare policy.

After being arrested in 2010, she pursued a transgender rights case in prison and attempted suicide twice last year, according to her legal team.

They refrained from giving details of how she would be freed over security concerns for the transgender soldier, who was born Bradley Manning before going through transition in prison.

In 2013, she was convicted of 20 charges, including six Espionage Act violations, theft, and computer fraud, but was nevertheless acquitted of aiding the enemy – the most serious of her charges.

The diplomatic cables and military files she gave to WikiLeaks, which she acquired during her assignment as an Army intelligence analyst, revealed abuses in Iraq and Afghanistan by the American military, provoking global outrage.

They also outlined secret documents on the treatment of detainees at Guantanamo Bay, killings by military contractors in Iraq, civilian deaths in Afghanistan and several individual incidents including the killing of two Reuters was correspondents in Baghdad.

In passing these cables, Ms. Manning said she wanted to expose the US military’s alleged disregard of the effects of war on civilians and chose to release information that she believed would not harm the security of the US.

However, critics said the leaks contained some of the nation’s most sensitive secrets and endangered information sources, which has prompted the State Department to act in pursuit of their safety.

This included several ambassadors being recalled, expelled, or reassigned because of embarrassing disclosures.

Mr. Obama’s decision to cut Ms. Manning’s sentence to seven years, including the time she spent in custody prior to her conviction, was met with strong criticism from some American politicians, notably Republican House Speaker Paul Ryan who called the move “outrageous.”

But the Obama administration argued that the case was fundamentally different to that of former NSA contractor Edward Snowden, who has since fled to Russia after leaking classified documents on the NSA’s secretive spying program.

“For the first time, I can see a future for myself as Chelsea”

In a statement last week, Ms. Manning thanked Mr. Obama and said that letters from supporters, including veterans and fellow transgender people, inspired her “to work toward making life better for others.”

“I can imagine surviving and living as the person who I am and can finally be in the outside world,” she said.

According to her representatives, Ms. Manning was subjected to violence in prison and argued the military mistreated her by requiring her to serve her sentence in an all-male prison.

As a result, Amnesty International, one of the group campaigning for Ms. Manning’s release, called for protections to be put in place to ensure other whistleblowers are “never again subjected to excessive and cruel treatment.”

They also point out that Ms. Manning’s original sentence was longer than those handed down to military personnel convicted of murder, rape, and war crimes.

“The US authorities’ vindictive treatment of Chelsea Manning after she exposed potential military wrongdoing is a sad reflection of the extremes those in power often go to in order to deter others from speaking out.”

As of now, the Army has placed her on active duty in a special, unpaid status of “excess leave” which would legally entitle her to military medical care along with commissary privileges. Meanwhile, her court-martial conviction is under review.