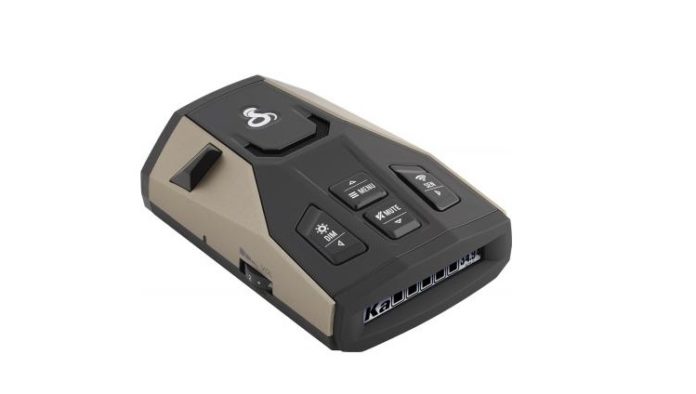 And we’re back again, this time with a look at one of Cobra’s more expensive radar detectors, the RAD 450. I have looked at everything Cobra have to offer in the radar detector market, and overall I can see who they are targeting, in terms of customer. They keep costs low, and they pass that onto the customer. What I take issue with is that with radar detectors you are not paying for the hardware. The tech has remained virtually unchanged for the last several decades, that’s right decades. The price of each build is based on the software, how clever it is, how it filters false signals, and how it integrates into your other electronics. Cobra eschew all those bonus features in favor of a simpler build.

The RAD 450 is at least a step up from the older ESR 800, which is nice. The range has been tweaked, the algorithms made more streamlined, and overall we have a budget model that can at least emulate the big boys in perfect conditions. Unfortunately unless you find yourself in the middle of a desert, perfect conditions are unlikely to come around. What we are left with is a, well, let’s say focused product. The last few weeks have taught me a lot about the radar detector business, and while this would have impressed me back when I started reviewing these things, it has become significantly less so when I compare it to the competition.

All that aside, I still think this product has a market. The right kind of consumer. It still does all the basics, and has a few extra bells and whistles. So let’s break it down, see if this is the right model for you.

Cobra builds tend to come with only a few features. It’s a bit of a blessing and a curse. It helps in terms of ease of use, but utility is greatly reduced. One area they seem to have nailed is the aesthetics of the build. I’ve been able to test out more than a dozen of these things, and the Cobra models all look gorgeous. Not all that important in the grand scheme of things to be honest, but it is a nice touch. The mute switch is right on the box, like most non Escort models, and I am not a fan of this. Having to lean over to hit it every time you get a false positive is a bit of a hazard. The casing seems hardy enough, but the weight of the build is a little concerning. I like a lot of heft to my electronics, makes me feel like they will stand the test of time, and with this low cost model you are not going to get that feeling.

one area that is often overlooked is he sound the detector makes when it, well, detects. I have near had to tear out my eardrum after listening to a few models, but thankfully the sound that comes out of the RAD 450 could be a lot worse. I’m not going to voluntarily listen to it, obviously, but I have been hurt in the past, so to speak.  The mounting bracket is the Cobra standard, A double suction cup system that, while it works well enough over smooth terrain, does not fill me with confidence overall. it might sound like I am being wholly negative this review, and while it is true from one perspective. Pretty much all of the issues I list, and will continue to list, are heavily mitigated by the price of the build. Trust me when I say there is a market and a customer for this product.

So, let’s get to the actual downsides. The Cobra line is bare bones, what you see is what you get. That means it lacks the phone integration you see with more expensive builds. Even the venerable V1 has an app, though you have to buy a separate cable and download it third party. Not seeing it here is such a let down. The features you could add with a little app mare enormous. It could mitigate all the false alerts that plague this low cost alternative. The single sensor is a minor issue. I have seen much more expensive builds opt of the one way sensor, and they work fine, though they have to rely on bounced signals to detect rear radar and laser.

So the good things. The detection system on the RAD 450 is a cut above the older ESR 800. With the 800 you had around half a mile to react, plenty of time for some, but not for others. here you are looking at an average of a mile, far more useful from my perspective. There is a user update system, so rather than learning itself or relying on an updated app, you can tell the box to ignore signals from known false positive locations. It also comes with Spanish and English built in, for obvious reasons. Overall there isn’t much here to rave about, but the addition of those few makes this far easier to recommend to a broader audience, especially when compared to the ESR 800.

There is one feature that impresses me more than all the others. At it’s core the RAD 450 is an excellent radar detector, the on the fly changes you can make to its programming elevate it far above the legacy builds coming out of Cora, but the additional functionality with the iRadar app puts this budget model on par with the low to mid range Escort builds. The iRadar app is not entirely compatible with all of the Cobra builds, and the RAD 450’s lack of in built Bluetooth mans that you are more often than not using only the most basic features of the iRadar, but when you combine the great core functions of the 450 with the real time threat detection of the iRadar you end up with some of the most comprehensive coverage on the market.

So, let’s review. The look of the build is great, the feel of the build is less so. The issues I see in the model are extensive, but mostly as a result of higher standards, and the majority of the issues are made less due t the inexpensive. The detection system is pretty good, giving you a fair amount of time to adjust your speeds, and the addition of user generated ignore lists is a welcome addition to the package. Overall, you could do a lot worse, and when we factor in the price this becomes an attractive product.

Always interesting to me that I have to write about law in these articles. i mean, we all know what radar detectors are for, even if we don’t say outright. If you are reading this abroad then be warned, radar detectors are illegal in most countries. They aren’t in the US for the most part, the 1935 US Communications Act has you covered for use in non commercial vehicles. if you are in DC or Virginia, or an US Military Base, they are illegal. In addition, Minnesota and California have laws prohibiting anything from obstructing you view in, so no mounting it to the windshield. Radar jammers are illegal in all jurisdictions. Not too surprising, but Laser jammers have no legislation against them in anywhere at the moment, and for blocking laser speed guns they are far more useful than simple detection systems, so have at it.

Now we arrive at the price, and it is here that the Cobra builds blow the competition out of the water. They may lack features and heft, but when you are speeding $150 or more you tend to not mind so much. With proper use and attention to detail the Cobra RAD 450 can be a match for the best on the market, but only if you are using it in set locations that you have programmed personally. Broad spectrum it pales in comparison to the Escort builds. Amazon.com sometimes has pretty good discounts on the 450, to see the current discounts automatically you can click here.

I have a thing about warranties. My view of them has become rather skewed due to the fact that i began by testing and reviewing mattresses. The direct to consumer mattress market has some of the best warranties in the world, so moving from that to the likes of the Radar detection world has left me a little cold. You are covered for internal faults for up to a year with the Cobra builds, but only if you are the first person to own the build, and only in the US. that applies to all of their products, not just the radar detectors, and while I think it makes some sense to not offer warranties to customers living in countries where the device is not actually legal, I don’t know why they wouldn’t give a warranty for a set of walkie talkies sold to a Canuck. A minor point, but I feel it says something about Cobra in general. Good thing the build is so cheap, else this might actually sway my opinion more.

Overall, the price to utility ratio is super high. There are few builds that are as inexpensive and easy to use, in addition to so useful.

I can see who this is for, and I can also see why they do not sell the ESR 800 on site. The added ability to set safe zones and permanent ignores is a must have feature. the issue with cheap radar detectors is the lack of filtering, and while I admit it is time consuming to have to set it up for your normal routes, it is as lest extremely useful and accurate once you do. If you don’t plan on any cross country trips with this build then it is for you.

To take advantage of all the current coupons and automatic discounts at Amazon.com click here.