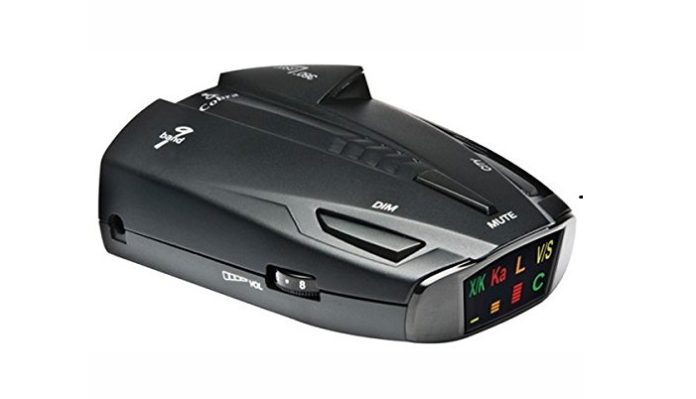 I have spent the last two weeks testing and researching the Cobra line of radar detectors, and for the most part they are decent builds. I can see what they are going for with them, aiming at the low end consumer, cutting a variety of features that are standard with other brands, but I cannot help but feel like they are hobbling themselves a little. Don’t get me wrong, the ESD 7570 works, there can be no questions there, but I feel like its utility is somewhat limited, due exclusively to how Cobra designs their builds. Radar detectors have changed very little in the last several decades, the hardware is essentially unchanged. it’s the software you are paying for, and it is in that area that Cobra falls short. On the plus side the lack of impressive software is less of an issue when you are spending literally a sixth of what you would elsewhere.

The ESD 7570 is not a featured item for Cobra anymore, they are focused on the RAD series of radar detectors, so you will have to use a third party site in order to purchase it. on the plus side I have found it very cheaply on Amazon. Quality wise it is more on par with the older ESR 800, which throws its limitations into sharper contrast. you may have issues with range and false alarms in some areas, so it is something that needs to be considered. Again, thankfully all the issues are severely mitigated b the low price.

So, let’s take a paragraph or two to look at the Cobra ESD 7570 in a vacuum. I review these things all the time, and have been a little spoilt by all the Escort models, as a result my predilections are a little skewed in favor of the feature rich.

As mentioned before, Cobra builds are a little on the light side in terms of features. They make up for this in a few areas, the lest important of which is in the aesthetics. I don’t know what it is, but all of the cobra build look great to me. the 7570 is very cyberpunk, and seen as it is supposed to sniff out radar signals there is some nice symmetry there. The position of the mute button is an issue for me. Escort place theirs both on the box and on the charger cable. I may be a little coddled by Escort in this regard, but I think it is much safer having to not lean forward to the windshield every time you get a false positve, and with Cobra models you should expect a fair number of false positives. Finally there is the feel of the build. Granted, it is seldom you will find yourself holding the box, but for those few times you do I wish I could say you would feel reassured. I find the Cobra ESR7570 lacks the substantial heft that I like to feel in my electronics. Don’t get me wrong, the plastic used on the exterior seems sturdy enough, but I like a bit of weight too, for added comfort.

An oft overlooked aspect of Radar detectors is the sound they make when they detect a signal. I have heard some ear melters this last couple of weeks, and thankfully this Cobra model is not one of them. Don’t get me wrong, it is far from a pleasant noise, sounding somewhat like a tree frog being slowly pumped up with helium while electrified, but it is a bearable sound. The mounting bracket is far from perfect, a simple suction cup design with a decent fit section for the body of the device. It is not a patch on the escort sticky suction cup plus magnet bracket, but it works, though it might be worth looking into third party brackets that fit.

I have been a little critical this whole review, but it must be stressed that you should not be writing this model off entirely. All of the issues I list, and the others I will go into in a moment are mitigated by the price. You will literally find no cheaper radar detectors on the market. The feature list is short. It can detect the radar signals, laser signals and has a rudimentary filtering algorithm. In spite of the filtering you are going to get false positives all the time, especially in cities. There is no app integration. There may be a third party app, like the one for the Valentine 1, but I doubt it. It’s a shame too, as a simple app would really elevate the build, adding much needed features, and refining the filtering a fair bit. Throw in some user data too and this had the potential to be the best buy on the market. Instead we have a merely functional product. The range on the radar detector is impressive, considering the inexpense. In busy conditions you can expect about a mile of warning, a little less if I am to be honest. Far from the worst I have seen, beating out even some of the lower end Escort builds.

There is one final feature that may or may not interest you. The iRadar app. It isn’t exactly integrated very well into this particular Cobra build, but the option remains to augment your range and utility by buying into Cobra’s award winning app. I love the thing, but I feel it is better implemented in other Cobra builds, and using it here is little different to using it sans. I think it is easy to see how it could help, and if you do go for a cut rate Cobra legacy build, and let’s face it with that price they are tempting, you will get some good use out of it in conjunction with the iRadar, just know going in you are hamstringing yourself by buying legacy rather than modern.

Overall there is not a lot to go on here. I get the 7570, really I do, but with so many features missing it is a hard sell. Sure, the price will sway some, but the utility you gain from spending only a little more offsets that. The look of the build is great, and the durability is adequate, even if I would have liked it to be  little heavier. Range will not be an issue for most people either, unless you need extreme range for interstate travel, in which case I have a review that might interest you coming up next week.

These articles have allowed me to look into all sorts of stuff I wold not have otherwise. For one thing I have to read up on state and federal law in order to make sure you don’t do yourself an incriminate. If you are reading this anywhere outside of the US I regret to inform you that for the most part these things are illegal. You can’t even drive up into Canada with one on display. In the US there are some restrictions that you should be made aware of. In DC and Virginia, and all US military bases, they are illegal to use. in addition, California and Minnesota have restrictions on what can be placed on your windshield, so bear that in mind. Everywhere else the 1935 US Communications Act has you covered for use in non- commercial vehicles. Commercial vehicles are typical again, against the law. As mentioned, Radar jammers are illegal everywhere, but laser jammers are not.

Now we get to the price, and it is here that all of the Cobra brand detectors shine. You can find the ESD 7570 for as little as $60 in some places. Usually we’ve seen the best prices here. So long as you use it right, and are willing to put the time in, the 7570 can be a match for any on the market, even if out of the box is it no where near as intuitive as the Escort builds.

I review a lot of things. It means I spend a lot of time reading warranties, and I know how to sot a good one. There are so few good warranties these days, the mattress industry seems to be the last bastion of excellence in this regard, so I was a touch surprised to find Cobra offering a fully comprehensive year long warranty. Unfortunately, I do not know if the ESD 7570 is covered by it, as they are no longer listed on site. It might be one of the trade offs you have to make to save so much on a radar detector, but that is up to you.

That price, I swear, if there was app integration with this thing it would drive down the price of every radar detector on the market. As it stands, this is still a product you have to consider seriously. I have laid out the issues, if you can get over them then by all means, get yourself a bargain. The price is more than fair, there are only a small handful in this range, and this is one of the better ones.

This is a product for those of us who don’t want much out of our radar detectors. There is no bells and whistles, and setting it up to run well takes time, but the price is astoundingly good. Be sure to check through all of Cobra’s products before making your choice. they have builds that are more current in a similar price range, and you can guarantee the warranty buying direct.

To get the Cobra ESD 7570 with all the discounts available at Amazon.com you can click here.