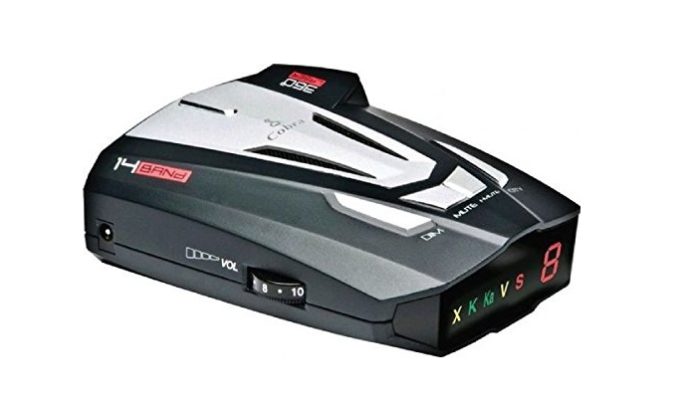 Been a while since I reviewed a Cobra model. Cobra distinguish themselves with low end models that while short on features, more than make up for it in terms of price. There is always more work involved in setting them up, but when you get it sorted you have a build that will stick around for a long time. Were it not for the existence of the Escort line of radar detectors I would be far better disposed towards the Cobra range, I have been spoilt by the feature set of those models, and even the V1 has smarter algorithms running in their venerable machine. Not that I don’t think there is a market for these, the Cobra XRS 9370 is a fine machine, but if this comes across as a bit harsh and dismissive, stick around until the pricing section, it really does re contextualize the whole review.

One of the reasons for the low price of the XRS 9370 is the fact that at its core Radar detector tech has changed very little in the last couple of decades. Valentine has been selling the same basic model for a long long time. The reason the more expensive models are priced as such is down to the software. They have smart systems, phone integration and all kinds of tricks up their sleeve so as not to bother you unless it is necessary. The thing about them though is that all models can be as unobtrusive as that, if you have a set route and you program it correctly.

So let’s get to the review itself, starting with the look and feel of the build. Not the most important thing in the world, but it can be useful in tie breaker situations.

First off, the XRS 9370 is not a supported model from Cobra, it is one of their older builds. Remember, I said that the tech has changed little, so that should not worry you unduly until we get to the pricing and warranty section. It means you will have to go third party if you want one, the good thing about that is that it drives the price down even more.

So, the look of the build. It’s an older model, in a cut rate pricing bracket, so we can’t expect the Mona Lisa, which is lucky, because this think looks more like Ecce Homo after the refurbishment. It reminds me a bit of the controller you give your little brother if you don’t like him very much. But that’s not all that important, what is important is the durability, and I feel like this one could take a pounding. I like a nice sturdy feel to my electronics, and the entire Cobra line delivers in that regard. The display is a little basic, but it is bright, and it imparts the necessary information well. The Cobra mounting bracket pales in comparison to the excellent bracket offered as standard on the Escort line, but it gets the job done. I would advise you look into a sturdier bracket in after market parts, but it should be okay as is.

The warning sound leaves much to be desired. Latter day radar detectors have found a way to make the sound more pleasant, but with the cheaper models you are stuck with the plangent tones of a cat stuck in a modem. That’s being slowly, but firmly, shaken. If you don’t set it up correctly you are going to be hit by the aural equivalent of stepping in water while wearing socks every time you pass an automatic door, or a parking sensor. If you do take the time to program the ignores, then this is less of a problem, you can and should set the volume to something you find tolerable. The mute button is on the box, which can be a bit of a hazard, but most firms do this, so it is not an issue unique to the Cobra.

In terms of range the Cobra XRS 9370 is acceptable. You are looking at around a mile or so of warning time in fair conditions. This makes it perfect for the inner city, and pretty good on the highway. There are longer ranged models out there, but none in this pricing bracket.

The on board algorithms and smart learning features greatly increase the utility in terms of day to day use. I have seen a few models that go off at the slightest provocation, and while that is also true here, you can coax this Cobra model into being quiet in the worst areas with ease. I hope to see more firms step up to the feature plate. The key thing here is the iRadar app, one of the most streamline apps on the market. It is not perfectly compatible with the XRS 9370, but I highly suggest you use it anyway. Cobra have crafted an easy to use app that allows you to update the user base, and in turn be updated by them on real time threats and false positives. It has a myriad of other features as well, but the most important one is the GPS connectivity, showing all the hot spots around you for miles, far in excess of the XRS’ regular range. A must have addition.

The Laser detection leaves much to be desired, but I would argue that no laser detector is worth the added expense. The feature is being pushed by most firms these days, and while it inarguably works, I do not think that it is useful. Most radar detectors work on a wide band system, which is why you can pick them up at range. LIDAR speed camera work on a point to point system, so for the most part the LIDAR detector only goes off when you are hit with a beam. Rendering the warning a touch on the useless side. There is a chance that it will pick up the refraction from a vehicle close by that is being targeted, but this is far too circumstantial for me to call it useful. There are other options for laser, and I will go into them in the legality section of the article.

The Cobra line does not have an app. It is the reason that even the cheaper Escort builds are so good, they can augment their on board systems with a real time network of other radar detector users. Due to this, setting up a Cobra requires you to have someone with you, who can mute all the false positives, the stationary ones at the very least.

Overall, while it sounds as though I was unimpressed, I maintain that this is still a viable options. It becomes more apparent in the pricing section, but at its core the Cobra XRS 7370 does everything a radar detector should do, it lacks bells and whistles, though I think it is easy to argue that what might be called bells and whistles are becoming standard features these days, but that’s an argument for the top ten I think.

This is a weird section of the article. I never needed to look into the law regarding robotic pool cleaners when I was testing them, but I do have to for the radar detectors, as they are illegal in most of the world. International readers can take it as read that radar detectors are against the law in your country. In the US they are legal in all but two states. DC and Virginia have laws expressly prohibiting their use. In the rest of the country, so long as you are not using them in a commercial vehicle you are fine. California and Minnesota both have laws restricting what you can place on your windshield, under obstruction of vision laws, but it is a simple matter to mount it elsewhere. Be careful when traveling up north, as they are illegal in Canada.

Now, radar jammers are illegal everywhere. LIDAR jammers are not though, and they work a lot better than LIDAR detectors. A combination of LIDAR jammer and Radar detector will give you the best overall coverage. Be careful when using it though, as you may still be brought up on obstruction of justice charges.

And here we are at the pricing section. Remember when I said all the issues would be render non-issue by this point? That’s because the Cobra XRS 9370 can be purchased for under $100 if you know where to look. That is five times cheaper than my favorite Escort model, a pretty substantial savings. So if you want something to test the waters, this is a great introductory purchase. To see all the current discounts and deals available on the 9370 you can click here.

On to the warranty, and I am sorry to say that due to Cobra no longer covering the XRS 9370 there isn’t one from them. I like the safety net of a manufacturer’s warranty, and losing that does make this less attractive as a purchase. But, so long as you verify with the third party re sellers what coverage they offer, you can at least be assured of something. I stick with amazon, they have excellent consumer protection included with all of their sales, something I hope will become standard in the future.

So, the price is amazing, but the warranty is non existent at base. Sure, you can look into alternative coverage, but losing the core coverage is an issue for me. I feel like the price is low enough to offset that though, as there is little risk involved, $80 is almost nothing after all.

I don’t know what else to say. The issues with the build are obvious, an older unsupported model with features that would have been impressive were it released to market in 2001, but today is a bit lacking in core features. It works, and it works well, and when you combine it with the price it becomes a valid contender in the low end radar detector market. Once we factor in the excellent iRadar app, this becomes are very viable long term purchase as well. I recommend a higher quality model in the Cobra line, but if you can’t quite afford it, or want to test the waters, then this is a great option.

To check out the current discounts and deals available at Amazon.com click here.