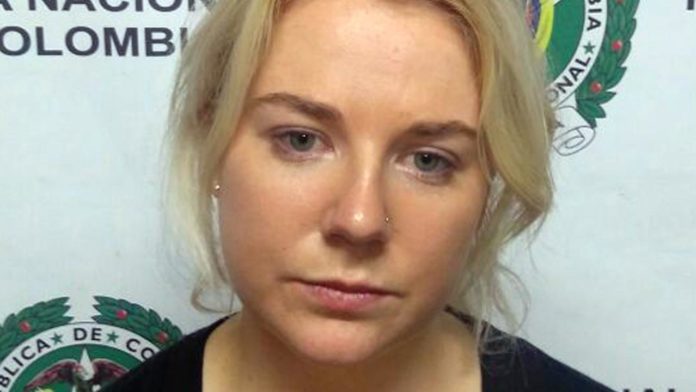 Colombian police has revealed images of Cassie Sainsbury, an Australian woman who was arrested after she was allegedly caught with more than 12 pounds of cocaine in her luggage. The images from the police show Cassie and the 18 packages of cocaine found in her luggage.

Cassie Sainsbury entered Colombia on April 3 and was arrested nine days later at an airport in Bogota. Police arrested her when they found a little over 12 pounds of cocaine inside headphone boxes. Ms. Sainsbury was arrested at El Dorado International Airport, one of the biggest airports in South America and one that has become famous for a series in the National Geographic Channel. The series, which began two years ago, follows police officers at the airport as they try to stop attempts at drug trafficking.

Ms. Sainsbury’s mother has said she was set up and used by traffickers. She has been told by her lawyers in Colombia to plead guilty to avoid the maximum sentence of 25 years in prison, according to her mother.

According to her mother, her daughter talked about the gifts to the man she became friends with in Colombia. The man then told her that he knew a guy that would give her a good price if she bought 16 or 18 of them. She added that the day of her departure, the man showed up to the hotel and gave her packages that were wrapped in plastic. She said she didn’t even open them to check if there were headphones in there.

The maximum sentence is 25 years in prison but her lawyers have told her to plead guilty and receive the minimum of six years. Her mother has also said that if she gives information on the people who gave her the packages, the sentence may come down to four years.

Ms. Sainsbury was denied bail and is currently at a woman’s prison. Her trial could last around two years if she pleads innocent but her mother says she would rather see her do four years than risk receiving an 18-25 year sentence.