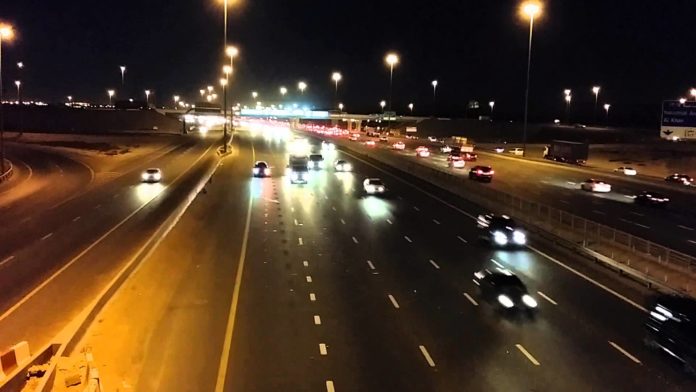 Dubai police are now searching for a driver who jumped out of his car to get on the back of a motorcycle. The dangerous stunt continued with the man jumping back to his vehicle. Authorities found out about the dangerous stunt after a video was posted on social media.

The video shows the man jumping onto the back of a motorcycle being driven on Sheikh Mohammed Bin Zayed Road, a major road in the city of Dubai. The man is seen jumping back to his vehicle a few minutes later.

The dangerous stunt was recorded on a smartphone’s camera and police are currently searching for the man seen in the video. The city approved new regulations, which focus on road safety, after the video appeared on social media. The new regulations will not allow the driving of recreational motorcycles in residential areas, roads and other parts of the city that will be chosen as restricted areas by authorities. The approved regulations will also require the motorcycle drivers to have all equipment and gear.

Dubai police have not identified the man but they are not happy that stunts like this are taking place in major roads. An official of Dubai police said these things would not be tolerated. He added that the driver involved in the stunt performed a suicide attempt. He finished by saying that it was dangerous, especially because driving motorcycles is more dangerous than driving a vehicle.

It is not the first time that dangerous stunts have taken place in major roads of the city. Police has been working on stopping them and catching those who are involved. Earlier this year, a driver and his friends were ordered to clean the streets for four hours a day for 30 days after they performed a dangerous car stunt. The driver was seen performing stunts at City Walk.

In 2016, Dubai seized more than 1,500 cars that were involved in stunts. Authorities have seized a few hundred more vehicles since the beginning of the year. The Dubai police official also said less people have been arrested since the community service was given to the driver and companions. The new motorcycle laws also focus on stopping the dangerous stunts and reckless behavior in residential areas and other parts of the city.