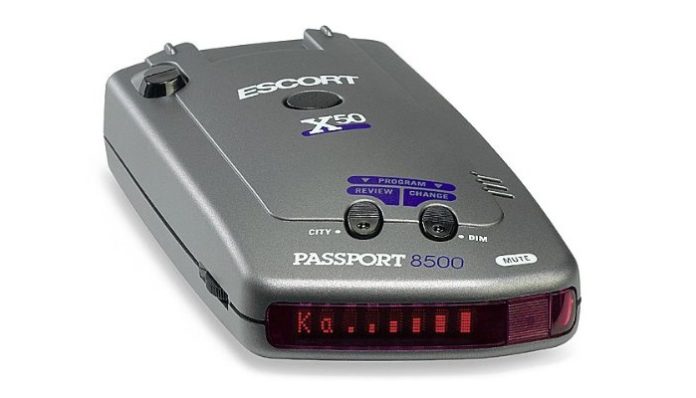 Going to spend the next week or so finishing up my series of reviews on the Escort series of Radar detectors. I have all the informaiton I need on the reaming models, and am just waiting on a few more tests in other areas. Right now, I am ready to give you my opinion of the now defunct Passport X50, an older model no longer supported by the firm. This is both a blessing and a curse. On one hand the price is going to be a hell of a lot cheaper, while the core features set remains as robust as any in their more modern line. One the other hand we lack a decent warranty, the performance guarantee and free access to the app. Overall I think it is still worth considering, especially if you can find it as cheaply as I have.

Radar detectors haven’t changed much in the last few decades. The core tech is the same, and even the warning sound they make is still that shrill mess that has me at least scrambling for the mute button. It means that the value in any model comes from it’s software, and I feel that Escort offer the most comprehensive software on the market right now. There is really only one other firm that can come close, Valentine, and even they lack as robust an app as the Escort line.

So let’s get right to the review. There is going to be a little ragging on the build for the first few paragraphs, mostly because it’s no longer supported by escort, but expect it to pick up near the end.

Continuing a bit of a theme here. Last week I looked at the S55, a now unsupported Escort radar detector, and this week I am looking at the X50, a now unsupported Escort radar detector. There are a few differences here though, the older S55 lacked a USB port, so updating was pretty much impossible, the X50 has one, so you can get in there and keep this thing up to date even now. Granted, it’s a bit harder to find ways to do so without Escort’s help, but a quick search lead me to a few places that can help.

Let’s start with the look of the build. one of the minor trade offs you make with the older tech is in the looks department, not a huge deal, true, but one that might be more important if you are torn between multiple models. The X50 looks like a mid nineties portable CD player in the worst possible way. A shame. The Display is one of those old big LED ones, the kind you used to see on clock radios and the like, so while it is nice and easy to read, it lacks the bells and whistles I cherish in Escorts other models. The mounting bracket is at least up t snuff. With the S55 you got the older style bracket, all clips and suction cups, here we can get the magnetic bracket, with the sticky suction cups for added stability. You may need to order that special from escort though, as not all the retailers I looked at are supplying it as standard. It’s only $30 though, and considering how much you are already saving going with this model it’s a small thing.

The warning sound is another area the X50 falls down on. It is shrill and irritating, and unless you buy the smart cable, you are going to have to lean over to your windshield to shut it off when it gives you a rare false positive. Granted, it is less of an issue when you are connected to your phone, and running the wonderful app that Escort make, due to it cutting down on false positives immensely, but it is still something you have to consider. If you do have the smart cable you can just hit the handy mute button that is on that. I wish more firms thought about moment to moment on the fly use.

Now we come to the app that i mentioned earlier. this thing really is a work of art. it allows you to fine tune the system, telling your radar dete4cotr what to go off for, auto muting the X-band is a good idea, seen as most jurisdictions stopped using those a long time ago. The best feature is the linked network, that gives you real time updates on the positions of radar waves. The app is already in use up and down the country, all these people keeping each other updated all the time, such a clever idea. The issue with using it with an out of date model is that you don’t gain access automatically. Some re sellers will include it in the buying price, but not all do, and you are still going to be charged a little more by the ones that do. on it’s own it’s pretty cheap though, $50 for 1 year access. I can’t think of a better way to spend $50 as a motorist. Remember that in some areas tickets can run upwards of $250, and even one ticket can unfairly raise your insurance premiums, sometimes in excess of $100 per year.

The LIDAR detector is where all of these things fall short. Detecting LIDAR is a cool idea, and the tech involved is fascinating, look it up if you want to lose an evening in all the weird stuff we can do with light, but real time use is severely hampered by the fact that you kinda have to be hit with a speed laser for the detector to go off, rendering the warning a bit on the useless side. It can pick up refraction off vehicles in front, and sometimes behind too, but on the whole it is too circumstantial. Better I think to pair a radar detector with a LIDAR jammer. I’ll go into a little more detail alter, but in short Radar jammer illegal, LIDAR jammer legal.

There are a few features missing from the X50 that I would have liked to see. Internal GPS and Bluetooth tech would have been nice, but the lack of them does not hamper it all that much.

Overall this is a great package. There is more work involved when you buy an unsupported Escort model, but if you are willing to put the time in you end up with an excellent build, that is more than a match for the flagships, at a third of the price.

Still weird to me that I have to write a section in these articles detailing the legality of owning them. Nothing I have reviewed in the past warranted it, but I guess when you sit in this grey area it has to be done. If you are reading this from outside the US I regret to inform you that in all likelihood radar detectors are illegal where you are. There are a handful of countries that don’t ban their use, so it might be worth looking up to make sure. In the US you are covered by the 1935 communications act, assuming you are not in a commercial vehicle. There are two states that ban them outright, Virginia and DC, and you cannot use them on US military bases. In addition, California and Minnesota both have restrictions on what can and cannot be affixed to your windshield, so please look into alternative mounting locations if you intend to use a radar detector in either of those states. Finally, Radar jammers are illegal everywhere, but laser jammers are not. LIDAR jammers are far more useful than simple LIDAR detectors, so for full coverage I recommend a radar detector and a LIDAR jammer.

At last we are at the price, and it is here that this model shines. The model is one of the better values from Escort. The prices tend to shift a bit so I recommend checking the current price at Amazon.com here. That said with a little tooling around you can have the X50 running as cleanly as any escort build for a fraction of the cost.

And the warranty. Well, here’s where it call comes a part a bit. Since the X50 is no longer supported you don’t really get a warranty, beyond any offered by the re seller. I recommend using the likes of Amazon, who have buyer protection guaranteed, to alleviate some of the risk involved. At the end of the day buying second hand, or after the model has been discontinued always comes with risks, but I feel like those risks can be minimized with savvy purchasing. It also lacks the Performance guarantee that I mentioned earlier. With other models of Escort radar detectors they offer to pay for your next ticket, should you get one. It’s a nice touch, a bit above and beyond in my opinion, and something I would like to see from other firms.

That price is so good, I cannot oversell it. The quality on offer in terms of core features, and so long as you spend the time getting to know your device, you have a top of the line-ish radar detector for the price of a bargain basement one.

There are clear issues here, I can see that. The look of the build leaves a lot to be desired, as does the display, but the build quality is nice, and it has a nice sturdy feel to it. The mounting bracket is better than the S55, and the smart cord is a god send when you need to make choices on the fly. The lack of a warranty is troubling, but so long as you buy from the right source, and through the right third party, you can be assured of safety. Overall there are better models out there, but none at so low a price. If you are in the market for a high quality radar detector, and don’t mind sacrificing warranty, free access to an app and high quality displays then this is the one for you.

To take advantage of the current deals and discounts available at Amazon.com you can click here.