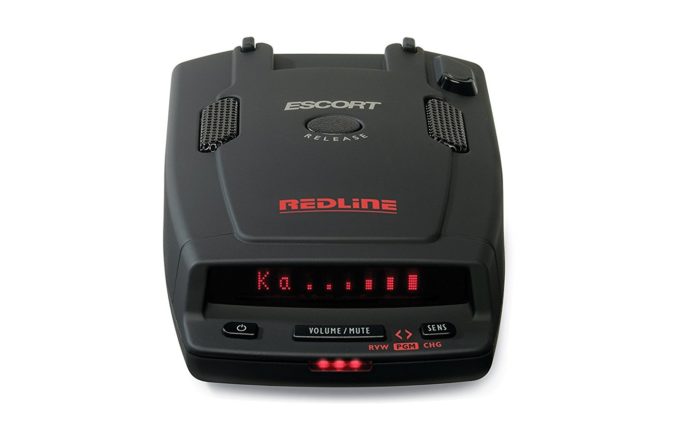 I have been looking forward to writing this one. The Escort Redline is one of my favorite builds out there, not for day to day use, but for long range travel. You will not find a radar detector more sensitive than this one. It can, and will, warn you of dangers miles away. For some that might be a bit much, and the idea of using the Redline in a city gives me a headache, but it can be done with tweaks and the right settings. One of the many improvements present here, but not yet implemented elsewhere in the escort line, is the enhanced Laser detection system. Laser is still no where near as wide spread as radar for speed detectors, so the improvements are not worth quite as much as you might think, but it is still nice to see.

The Redline is one of the more expensive models from Escort, being in a similar price range to the Max 360. Feature wise it is very comparable to the Max 360, one or two extras, but the focus of both products is very different. Where the Max 360 is more broad in terms of function, the Redline is a focused build. The range and sensitivity make it perfect for interstate travel. One of the most interesting things about radar detectors is the fact that the hardware has not changed all that much over the last couple of decades, what you are buying is the software, and a lot of thought has gone into the software that comes with an Escort radar Detector.

Let’s move on to the in depth review, starting the with the look and feel of the build.

There are few radar detectors that can match the Escort line in terms of features and integrations. It’s why they are also the most expensive on the market. They have a number of cut down models that are near a match for the likes of the Mx2 and the Redline, but sometimes you want the best, and this is it. The Redline has the distinction of being the best looking build to come out of escort. So many of their radar detectors look more like clock radios from the 80’s than modern sleek high tech devices, but the Redline is the standout. i hope they iterate on this design moving forward. The feel is fantastic too, you know you are holding an expensive and long lasting piece of hardware when you take this out of the box. So often I find that i not the case with some builds, so it is nice to not feel like I’m going to break this by giving it a squeeze.

The display is a bit of a step backwards though, using a 280 LED backlit rather than a full resolution LED display. Not a huge issue, but a mark of inexpense in a build that reeks of quality. The smart lead is a wonderful design innovation from Escort. It contains a few buttons, for muting and the like, so you don’t have to lean forward to the windshield, which I maintain is dangerous.

There are few downsides to this build, but chief among them is the sensitivity. Out of the box this is going to be picking up signals for miles. It boasts the longest range not only of any escort radar detector, but any detector on the market. It’s why I recommend it fro long road trip over the highway. it will keep you right there, but use it in the inner city and it will pick up every automatic door and parking senor for miles, driving you insane. the filtering system does a good job of mitigating that, but without manual edits there is little you can do to get rid of false positives.

The app that comes with all Escort models is the best from any first party manufacturer. There might be more options with the eV1 app, but only the third party one, and it’s a firmware update away from being obsolete. The Escort app keeps a real time update of trouble areas, linking you to all other Escort radar detectors out there, making sure you are safe and sound no matter where you go. It can also update your ignore filter, but I recommend doing that manually, else you might run into speed guns right next to automatic doors.

There is a laser detector here too, but I have found that they are little on the useless side. they work, don’t get me wrong, but the usefulness is limited. Laser speed guns work on a point to point system, and the dispersion given off is so faint that it can only be picked up less than half a mile from whatever it hit. It does not give you much time to correct yourself. If it hits your car you will know, but only too late. Bear in mind that laser jammers are not against the law, though radar jammers are.

Overall there is a lot to like here. All the core features of an escort build with the added bonus of hyper sensitivity. The range on this thing puts all other builds to shame, and it is probably Escorts prettiest looking radar detector. It might be a touch on the sensitive side for city use, but you can change the settings yourself, though it might take time. I can see who it is aimed at, and for the right consumer this is perfect.

No other series of reviews has forced me to look into the law surrounding owning and operating the product reviewed. I mean, if I ever review firearms that might change, but for the most part I review innocuous things I consider radar detectors fairly innocuous as well so the fact that they are illegal in the vast majority of countries is somewhat surprising. Hell, they are illegal in a few states as well. Across most of the US they are legal, the US Communications Act of 1935 has you covered so long as you are not in a commercial vehicle. In the states of DC and Virginia they are illegal, same with US military bases. In Minnesota and California you cannot mount them to the windshield, laws prohibit anything obscuring view, other than that you should be fine. Know that radar jammers are illegal across the board, but not Laser jammers, which are far more effective than laser detectors at protecting you from laser guns.

And the price. Expect to pick your jaw back up, the quality on offer here comes at a price premium. On average you can expect to spend in and around $550. It tends to stick around this price point most places however you can get it for a pretty nice discount by clicking here. If you need the max range, coupled with smarter filtering then you have few options beside the Redline, and none are in a comparable price range. This is one of Escorts more expensive builds, so if you want the features at the cost to range and ease of use you can move down to a cheaper package from them.

And finally he warranty. these days there are so few good ones, and the one from Escort is hardly what I would call amazing, but there are worse ones. At base it covers you from manufacturer faults for a year. They offer an extended warranty, for an extra $30, but I do not recommend it. If you are going to get a factory fault you will see it within the first year for certain. Remember, if it breaks at all during normal use within that first year, I would consider that a factory fault and you should be entitled to your replacement or repair. They also offer a nice supplementary system, called the Performance Guarantee. If you get a ticket they will pay it, so confident they are in their product’s ability to keep you safe. I love it, there are some restrictions, for example the ticket must be for speeding, for some unknown reason, but overall it’s a nice touch.

Overall, the pri9ce might be high, but so too is the performance and the feature set. It all depends on what you need, and if you need the longest range detector then you have found it, pay whatever it takes, as there are pretty much no other models that come close to the Redline.

The Redline has it all, or as close to as we are going to get. Not only does it have all the utility of the Max2 but it comes with a m ore sensitive sensor too. The price might be high, but it’s fair, and the after care on offer is impressive, if a little ironically pedestrian. Add in that wonderful app and overall this might be my favorite on the market.

To get the Escort Redline with any of the discounts at Amazon.com automatically applied click here.