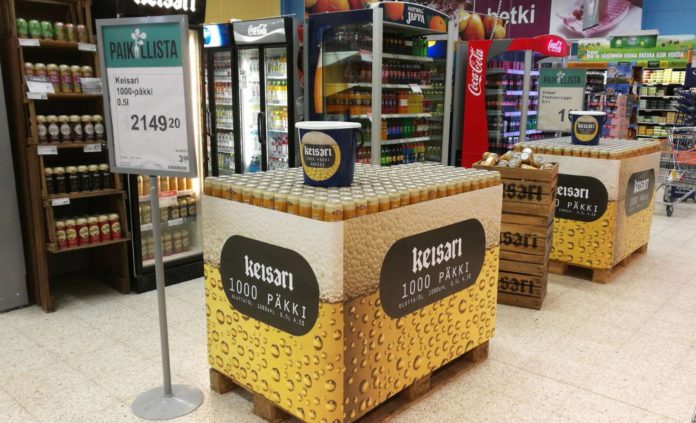 There is plenty of beer being sold around the world but one company in Finland has caught the attention of people with its latest release. Nokian Panimo, a brewery in Nokia, Finland, has released a pack that has plenty of beer. The pack is not the usual ones we see at stores, it is actually one that has 1000 cans of beer. The giant packs were officially released on April 28 on one of the supermarkets in the area. 1000 cans of beer is a lot but the release has actually caught the attention of many people.

The pack costs more than $2000 and while the price may seem high, this has not stopped some from buying it. The few supermarkets where it is available, have already seen a few customers bring the entire pack to the cashier. One of the supermarkets even decided to take a picture of the first customers that bought the pack. The gigantic pack has to be carried on a cart and carefully carried through the side of the cashier as most supermarkets don’t have lots of space between the cashiers to carry Nokian Panimo’s latest release.

Since the release, customers have been posting pictures of their 1000-can pack purchase on social media. One post was from the company Qvik, which revealed an image of a pack sitting on its office. The company didn’t have to carry the pack very far as the supermarket happens to be located below the company’s office. Another image showed a supermarket employee bringing the cart with the gigantic pack to the office.

Nokian Panimo’s idea didn’t happen because the pack would be a success or something that customers were asking for. The company told a local news outlet that it all began as a joke challenge to one of its competitors. The company had released a 100-can pack of beer earlier that month. 100 cans already seemed like a lot but Nokian Panimo took it to another level by releasing a 1000-can pack.