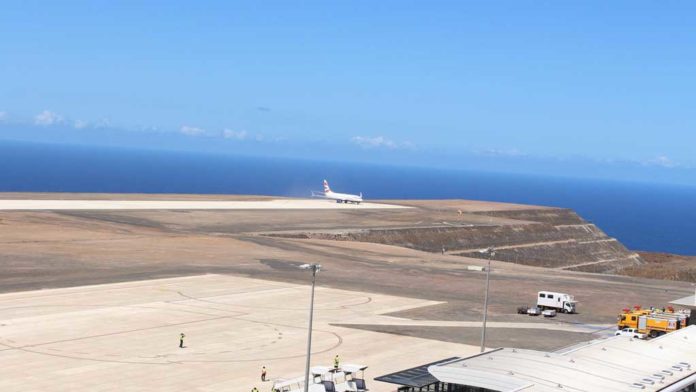 The first commercial flight has landed at St Helena Airport nearly a year after its official opening. The airport, which has been called ” the world’s most useless” in recent months, welcomed its first 60 passengers last week. The airport officially opened in June 2016 but the strong winds made it difficult for some planes to land there.

St Helena, which has a population of around 5,000 people, is one of the world’s most isolated islands, making it very difficult to get to by plane or ship. The island is more than 800 miles from any other island and before the airport was opened, the only way to get there was by ship. It seemed like the airport would make it easier for tourists to visit St Helena but the island had to wait 11 months for a commercial flight to land there. The island also had to wait a lot more for the airport to be completed.

The St Helena Airport was announced back in 2005 but there were a few obstacles that made the project take 11 years to be completed. One of the biggest problems was finding a construction company, which took six years. The cost of the airport was nearly $368 million.

The airport was opened almost a year ago but only private planes had been allowed to land there. Large planes were not able to land there because of the weather conditions. The airport would not see a commercial flight in 11 months, which led to it being called ”the world’s most useless”.

The first commercial flight landed on the airport on May 3. The flight brought 60 passengers but it appears that the airport could be waiting a while for another one as it was only done because two ships that were supposed to go there cancelled their trips. The ships, which were the only way of visiting the island before the airport was completed, could continue to be the main transportation to the island as they have reportedly resumed their trips.

The airport was seen as a way to replace the few ships that would travel there once in a while but the weather conditions have made that difficult. The island, despite having a small population, does have a few places to visit and is an adventure for those who like to visit the most isolated places in the world.