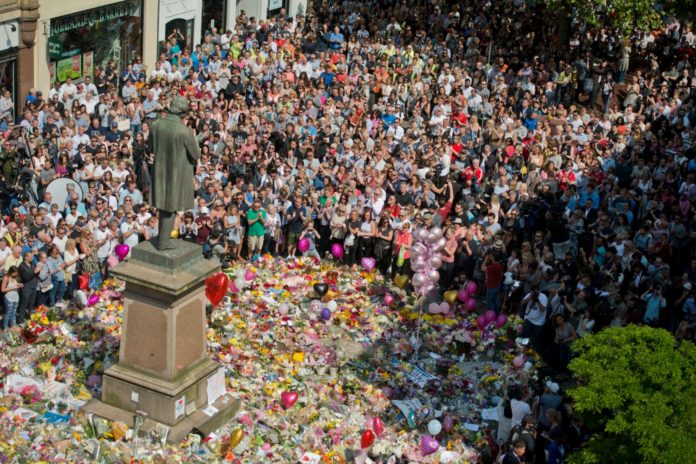 The husband of a woman who was injured by the explosion at a concert in Manchester on Monday has said his wife was on the phone at the time. He believes this may have saved her life. Lisa Bridgett was talking on her iPhone when the explosion happened. She was nearby and the explosion sent a steel nut flying towards her head. Bridgett was not struck in the head by the steel nut because it hit her phone and finger. She lost a finger but that and the phone helped stop the steel nut, which could have caused a serious injury or even death.

Her husband, Steve, says she is very lucky to be alive. He believes the steel nut was slowed down by the phone. Bridgett sustained other injuries in the explosion, including a fractured ankle. She is currently in the hospital after undergoing a surgery on Tuesday.

The Manchester bombing left 22 people dead and more than 50 others injured. The explosion happened after an Ariana Grande concert at Manchester Arena. Her husband said that her being on it at the time probably saved her life. He added that the steel nut hit her phone, which not only caused it to change direction but also slowed it down. He also thanked the emergency teams for their help after the attack.

Authorities are still investigating and have said that accomplices may still be at large. Police have already identified the suspected bomber and two days ago, raided a property believed to be his home. The suspect reportedly called his mother and brother 15 minutes before the attack. Yesterday, authorities in Libya arrested his younger brother and father. His younger brother reportedly knew he was planning an attack more than a month ago. Two suspects have also been arrested in Manchester.

Ariana Grande has suspended her world tour and has offered to pay for funeral costs of Manchester Arena victims. Scooter Braun, Ariana Grande’s manager, also posted a string of emotional tweets yesterday about the Manchester attack.