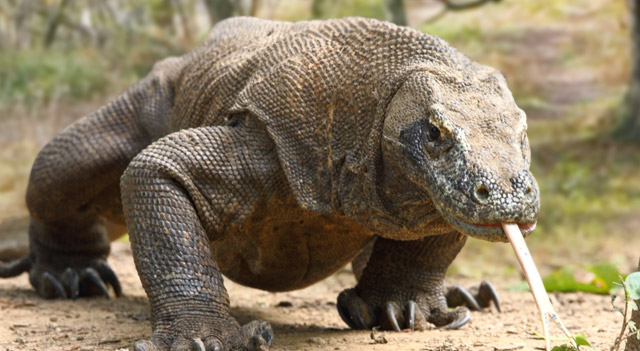 A tourist who reportedly ignored park officials about a Komodo dragon was bitten while trying to take a picture. An official of an Indonesian national park warned the tourist about getting too close to the animal as it was eating at the time.

The tourist was bitten on the leg as he tried to take picture of one of the biggest and most dangerous lizards in the world. The incident happen on Wednesday morning and the tourists was quickly taken to a hospital nearby.

Komodo dragons, which are the biggest and heaviest lizards in the world, are known for eating large pieces of meat and eating whatever they find. The lizard is also venomous, which makes its bite even more dangerous.

Pictures after the attack showed the tourists laying down on the floor with severe injuries on his leg. The Chief of the Komodo National Park, Sudiyono, said the tourist was bitten as he tried to take the picture. He added that the man was helped by locals and taken to a nearby hospital for treatment.

Komodo dragons are found only in limited areas, including several Indonesian islands. They are currently on endangered status as their numbers have dropped due to hunting. Komodo dragons don’t usually attack humans but are known for eating anything, including animals that are a lot larger than them

Only a few incidents with Komodo dragons have been reported in the country in recent years but one of those left a resident dead. The population of Komodo dragon is said to be less than 4,000, with numbers declining in 2014 and 2015. The reptiles have their own national park in Indonesia, which is the only country where they are found. One of the islands has over 1,500 Komodo dragons.

The Komodo dragon left severe injuries on the man’s leg but locals acted fast and bandaged the injuries right away. He was then rushed to a nearby hospital, where he is in stable condition.