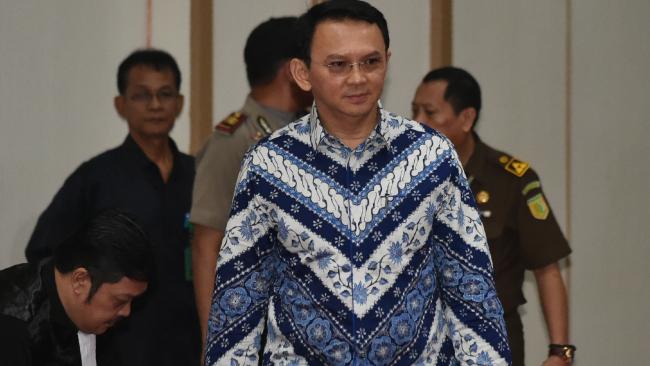 Jakarta’s Christian governor Basuki Tjahaja Purnama, popularly known as Ahok, was sentenced to two years in jail on Tuesday for blasphemy against Islam, a harsher than expected ruling in a trial that was seen as a measure of religious tolerance in Indonesia, the world’s largest Muslim-majority nation.

The guilty verdict comes amid concern about the emerging influence of Islamist groups, who held mass demonstrations during a tumultuous election campaign that ended with Ahok losing his bid for another term as governor.

Ahok, an ethnic-Chinese Christian, was an ally to current Indonesian president Joko Widodo; but the verdict will be seen as a blow to a government that seeks to quell radical groups and sooth investors’ concerns that the country’s secular values were at risk.

As thousands of supporters and opponents alike waited outside, the head judge of the south Jakarta court, Dwiarso Budi Santiarto, said Purnama was “found to have legitimately and convincingly conducted a criminal act of blasphemy, and because of that we have imposed two years of imprisonment”.

Andreas Harsono of Human Rights Watch called the verdict “a huge setback” for Indonesia’s record of tolerance for minorities.

“If someone like Ahok, the governor of the capital, backed by the country’s largest political party, ally of the president, can be jailed on groundless accusations, what will others do?,” he said.

Thousands of police were deployed in the capital early on Tuesday in case clashes broke out, however there was no immediate instances of violence following the court’s verdict.

Ahok told the court he would appeal the ruling.

The verdict was met with shock among his supporters outside the court and some wept openly.

Prosecutors had called for a suspended one-year jail sentence on charges of hate speech. The maximum sentence for hate speech is four years in prison while blasphemy charges carry a a five-year sentence.

Hardline Islamist groups had called for the maximum possible penalty over comments by Ahok they deemed were insulting to the Islamic holy book, the Quran. Meanwhile, Ahok denied any wrongdoing, though he apologized for comments he made last year criticizing his opponent’s use of the Quran for political campaigns ahead of the election for governor.

Ahok lost his bid for re-election to a Muslim rival, Anies Baswedan, on April after the most divisive and religiously charged election in recent years. He will hand over his position to Mr. Baswedan in October.

Analysts claim that radical Islamist groups that rallied against Ahok significantly contributed to the outcome of the decision.

Rights groups fear that they are amidst a surge of religious intolerance in a country where most Muslims practice a moderate form of Islam and is home to sizeable communities of Hindus, Christians, Buddhists, and people who adhere to local beliefs such as Animism.

The government has been widely criticized for doing little to protect religious minorities, but Mr. Widodo had urged restraint over the trial and called for all sides to respect the legal process.