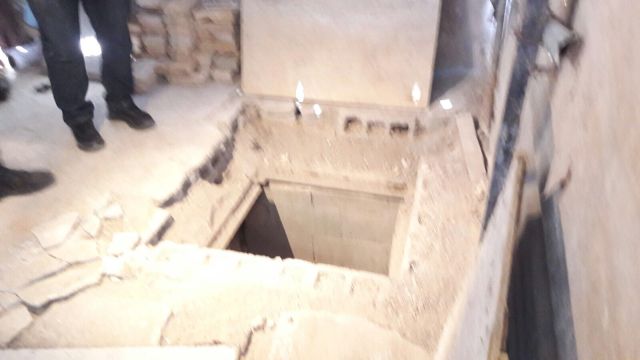 Authorities in Mexico have found a secret tunnel in a prison. The tunnel was not completed and no one had escaped but authorities reportedly found drugs, medicine, alcohol and tools in the area. The hole that led to the secret tunnel was covered by bricks and was 16ft deep, according to authorities.

The discovery of the secret tunnel comes less than two years after a tunnel escape in another prison made news around the world. In the escape, Joaquin ”El Chapo” Guzman is seen sitting inside the cell and suddenly disappearing after walking to the side. Guzman escaped the Altiplano prison but was recaptured six months later. Guzman was extradited to the US in January. The Altiplano escape was the second time he escaped from a prison.

The secret tunnel found by authorities recently was at a prison in Reynosa, a city just a few minutes away from the Mexico – US border. According to local media, authorities found the tunnel after using geothermal technology. Images show a hole that appears to lead to the secret tunnel, which had not yet been completed. Authorities confirmed that no one had escaped.

Two months ago, 29 inmates escaped through a tunnel under a Mexican prison. Authorities recaptured 12 of the 29 shortly after their escape.

The secret tunnel was discovered on Saturday night by local authorities, who continue to search the area for more tunnels. Authorities confirmed that visiting hours have been resumed and that the prison is operating normally.

The tunnel found by Mexican authorities connects the prison to a wooden house nearby. In 2011, 17 inmates also escaped from a prison in Reynosa. The inmates reportedly escaped through a tunnel that began from the prison laundry. It was one of two prison breaks that occurred in May 2011 in Reynosa.