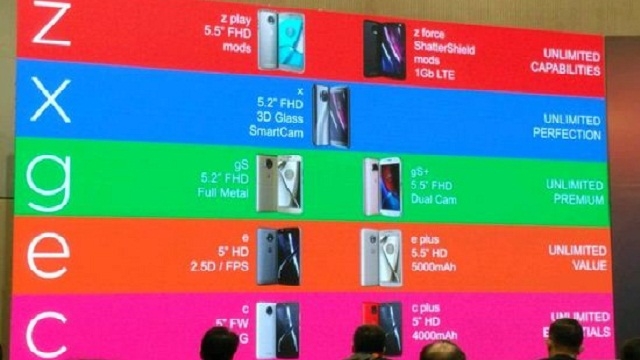 Waiting for new Motorola phones? Well, there appears to be very good news as famous leaker Evan Blass has shown a photo of the phone lineup planned by Lenovo this year. The presentation photo shows a total of nine phones, including the rumored Moto X, which is said to be coming with the Moto X4 name. The presentation photo does not reveal much about the nine phones but it does give fans an idea on what the company might be planning to release in 2017.

The presentation photo has two versions of each phone except for the Moto X4, which only has one. The photo shows that the new Moto X4 will come with a 5.2-inch display, 3D Glass and SmartCam. It’s been nearly two years since the last release of the series and the phone has been rumored for quite some time now. The 2015 Moto X series had three versions of the phone, including the Moto X Force, which has a shatterproof display. The Moto X4 rumored specs are 4GB of RAM, 32GB or 64GB of storage and the new Snapdragon 660 processor. The phone is also said to be coming with dual camera technology.

The Moto G, E and C also make an appearance on the presentation photos. The Moto G5 was recently announced but it appears that the company is planning to release an upgraded version with the Moto gS. The photo shows a Moto gS and gS+, which have 5.2 and 5.5-inch displays. The Moto gS reveals the phone will be full metal while the gS+ shows that it will have Dual Cam.

The Moto C phones, which were officially announced today, will start at $97. The Moto C and Moto C Plus are now the company’s most affordable Moto phones and according to reports, they are aimed at first time smartphone users.