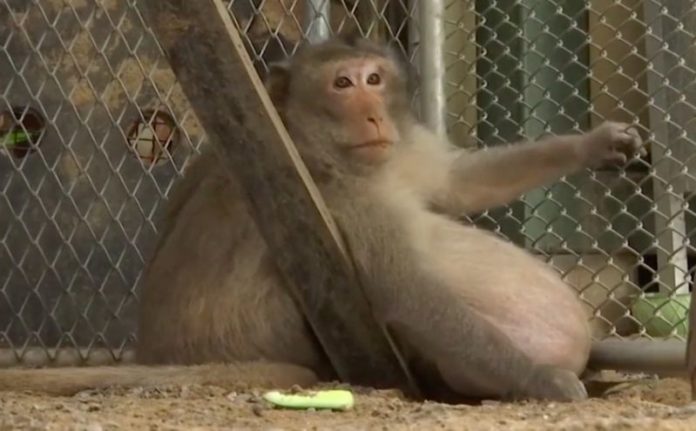 An obese monkey known as ‘Uncle Fat’ by residents and tourists in Thailand has been placed in rehab. The monkey rapidly gained weight when he started to eat junk food and soft drinks given to him or left behind by tourists.

The monkey made news around the world when pictures of him started surfacing on social media. The pictures not only caught the attention of people on social media but also wildlife officials in the area, who decided to rescue him and send him to rehab. The monkey will be put on a strict diet to lose the pounds he gained during the time he ate only junk food and soft drinks he received or found. He will spend the next few months in rehab before being released into the wild.

Thailand has a few tourist attractions where monkeys are sometimes fed by people but Uncle Fat was doing more than just eating fruits. Most macaques weigh around 20 pounds but Uncle Fat’s weight was around 60 pounds when he was caught.

Uncle Fat is still able to move, despite weighing three times more than other macaques, but it was clear that he was eating a lot more, with a huge belly that makes it difficult for him to move fast every time he walks.

From Burgers and Fries To Fruits and Vegetables

Uncle Fat’s pack was also part of his weight problem as they reportedly brought him food. Before he caught the attention of wildlife officials, he was eating burgers, potato chips and many other unhealthy foods. He was caught back in April 27 and while he continues to receive food, it is now just fruits and vegetables.

It’s been less than a month since Uncle Fat was caught and placed in rehab and while he is still overweight, wildlife officials plan to help him lose a lot more weight before releasing him back into the wild. Uncle Fat’s new diet is now 14oz of fruits and vegetables two times a day. Uncle Fat is now at a rehabilitation center in Bangkok, where he will remain until he is back in shape.