The rapper Tyga was born as Michael Ray Stevenson on November 19, 1989 in Compton, California. There’s some controversy over whether he was raised in an affluent family as a leaked video from when he was 14 seemed to suggest, or in a poor area of Compton like he claimed. Either way, his music was influenced by the stylings of Eminem, Lil Wayne, and Cam’ron.

How Tyga Got Famous

Tyga (a stage name made of the acronym Thank You God Always,) performed in rap contests with school friends, and created mix tapes that he shared both with his friends and online. When he met up with his musician cousin Travis McCoy (one of the members of the rap rock group Gym Class Heroes), he got a gig touring with the band. His cousin also wanted him to sign with Bat Squat Records, his independent label.

Before even putting out a studio album, Tyga was booked to perform at the 2007 MTV Video Music Awards with Lil Wayne and Fall Out Boy. The connection with Lil Wayne was especially advantageous. Tyga made an appearance on a popular Lil Wayne album, and his first single “Coconut Juice” was a summer hit of 2007.

Soon after, Lil Wayne signed him to his Young Money Management company. His first album, called No Introduction came out in 2008, but Tyga also released mix tapes that featured other popular rap artists. His song Deuces off one such mix tape became extremely popular, reaching number one on the Billboard chart for hip hop and r&b songs.

Tyga released 4 more studio albums between 2012 and 2015. All of them continued to be star-studded, with cameos by famous artists such as Chris Brown, Nicki Minaj, Wiz Khalifa, and Future. The third studio album, Hotel California, came out to mixed critical reviews, and only sold 54,000 physical and digital copies in the US. In late fall of 2016, he was signed to Kanye West’s label GOOD Music. While there’s no news of a new album in the works, Tyga and Kanye released a single together called Feel Me in January of 2017.

Tyga has dated many famous women since he rose to fame himself. In 2007, Tyga began courting Kiely Williams, one of the members of the Cheetah Girls. After calling it quits in 2008, Tyga dated Chanel Iman, one of the Victoria Secret Angel models. Next came actress Logan Browning from 2009 to 2012. During that time, he was also dating Leaux Lolo Steez, Jordan Craig, and Seiko Huffman. Tyga began dating Blac Chyna in 2012, and she had his son King Cairo the same year. They were engaged for a while, but it didn’t work out. He started a relationship with her best friend Kylie Jenner, which just ended in 2017. They were rumored to have been dating since Jenner was just 16. Tyga is currently single. 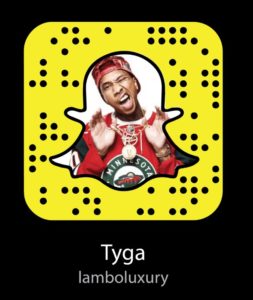 It doesn’t look like Tyga has his own personal Facebook profile, but he does have an official Facebook page. He updates it often with memes and funny videos, as well as updates about his touring schedule, promotional photos, and music videos. Join the rapper’s 16 million followers by clicking here.

You can find Tyga on Instagram here, under the username kinggoldchains. He posts high quality photos of himself on gorgeous beaches, in the first class on a plane, or even in a booth of a Chinese restaurant. He has over 12.3 million followers, and he clearly is on a good post schedule as he has made over 2,500 posts.

Tyga’s twitter, which is mainly used as an aggregation method for his other social media, can be found by clicking here. Tyga has 7.04 million followers on Twitter, and has tweeted over 10,000 times.

What is Tyga’s Kik Username or Code?

You can find Tyga on YouTube by clicking here. He makes playlists of his albums, and you can also find a playlist of videos that he has liked and favorited. If you are looking for all of his latest videos, or a playlist of Tyga music to put on in the background, this is the place to be.