UK: Mass Brawl Breaks Out On a Kent Beach 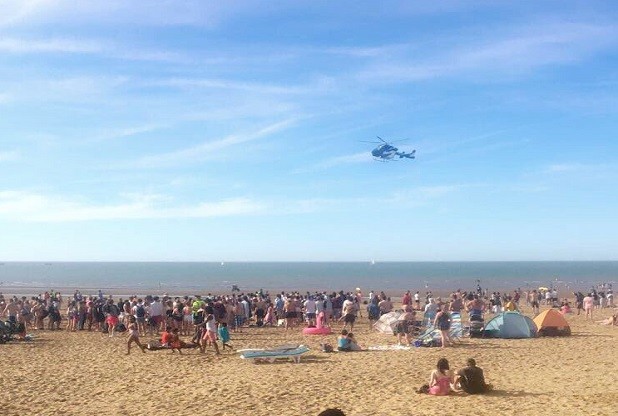 A mass brawl on a Kent beach got out of control when up to 50 people got involved. Emergency teams had to bring an air ambulance to pick up the people injured during the brawl. Authorities were also called in as initial reports said that one person had been stabbed during the brawl.

The beach was packed with residents and tourists when the brawl broke out. Kent Police have confirmed that no one was stabbed during the brawl. They did confirm that one teenager was taken to the hospital with non life threatening injuries. Images show a helicopter arriving to the beach to treat and pick up the people injured. The teenager was stretchered off and flown to the hospital.

Up To 50 People Were Involved

According to witnesses, up to 50 people got involved during the mass brawl. The Sun reported that the brawl began over a girl. A witness told Mail Online that the fight began between two people but that it quickly grew. The witness says a girl and a boy were arguing at first and then a group of teenagers surrounded them. She says she thought it was just an argument between teenagers but then knew it was more serious when police and emergency teams began arriving to the beach.

Another witness said that the brawl just happened out of nowhere and that they heard it was over a girl. A Kent Police spokesman said they were contacted at 5:05 p.m. and that officers are still investigating the incident. Police also confirmed that the first reports of a stabbing were not true.