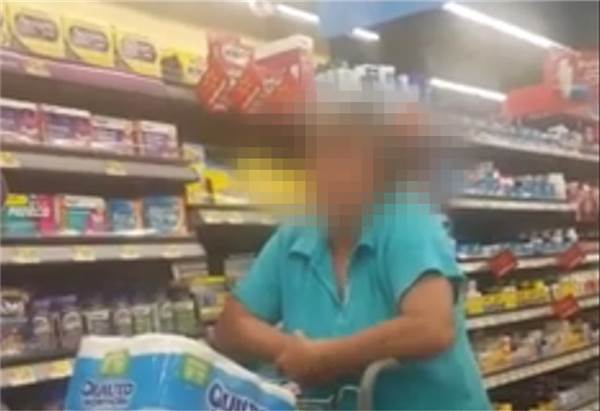 Walmart has said it will ban the woman caught on video telling customers to ‘go back to Mexico’. The woman is also seen calling another customer the N-word after she tried to help during the incident.

The incident happened on Monday at a Walmart in Bentonville, Arkansas. The woman was caught on video and it was later posted on Facebook, where it was shared and commented by hundreds of people. According to Eva Hicks, the incident began when she politely asked the woman to step aside so she could reach for a medicine. Hicks, who spoke to CNN about the incident, said the woman became aggressive right after that. The woman said a few things after Hicks asked her to step aside.

Hicks says the woman moved back her cart and started saying that people bother her on every aisle. The woman then began insulting Hicks and that’s when she took out her phone to get it on video. During the incident, the woman told Hicks to ‘go back to Mexico’. Hicks says she had never experienced anything like that in her life and that nobody had ever talked to her like that. She says she felt very insulted and unwanted.

The woman continued her racist rant after another woman attempted to help. The person, who is not seen on camera, tells the woman to stop being ignorant but she responds by calling her the N-word.

During the racist rant, a manager and other customers are heard defending the woman who was being insulted. The woman was reportedly asked to leave the store by a manager after the incident. Hicks says she posted the video on social media to raise awareness.

A Walmart spokesperson spoke to CNN and said that they were still working to identify the woman in the video. Walmart has also said it will not allow the woman to shop at their stores. The retailer also posted a statement saying it has no tolerance for the language or actions seen in the video.