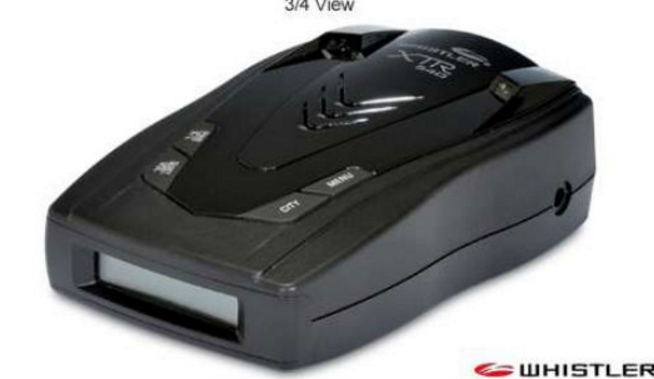 I never thought I would see a lower cost model than the now discontinued Cobra RAD 450 second hand, but somehow the fine folks over at Whistler have gone and done it. The price of this petite machine will leave you flabbergasted, and if you don’t use that word too often, then believe me, you will after this review. Add in the fact that this build is cordless, and we have a multi-faceted, dirt cheap radar detector that can get the job done. Unfortunately it does little else. Getting by with its on board algorithms and some manual fine tuning, owning and operating the Whistler XTR 540 is a bit of a chore, but if you are willing to put the time in, it can be very rewarding.

I was shocked to find that the V1, Valentine’s sole model of detector, has remained largely unchanged since its debut, some time in the nineties. When you think about it it makes sense, I mean, radar is radar no matter where you are, but it’s still a surprising fact initially. There are all kinds of tricks can be done with clever algorithms, and even more wonderful features can be added with the addition of a phone app. The Whistler XTR 540 eschews all those bells and whistles, aha, in favor of a simple design, and considering the price I feel it has paid off here.

So let’s get to the review, see if the Whistler XTR 540 is the right product for you.

This last few months have been a lot of fun. Getting to see the best the market has to offer, and the cheapest the market has to offer. The difference in feature sets tend to boil down to programmability and app integration. So it’s a bit refreshing to find a model that doesn’t do that. It’s just a simple detector with a basic filtering algorithm. While in the long run that might get grating, I can certainly see a market for a light weight build that doesn’t require all that much tuning. There are obvious downsides to this, false positives being chief among them, but I feel the Whistler offsets these in a few key ways. So Let’s get to the aesthetics of the build.

Gotta love symmetry in design. So many models look loop sided these days, and I have no idea why. there may be a push in the design world for asymmetry, but I have never found it pleasing to the eye. The Whistler looks neat and clean, like a hi tech mouse. One area it falls down is the feel. It looks good, but it feels like what it is, an inexpensive model. I would not try to jostle this thing unduly, not saying it will break, but it will give you anxiety. The display is a simple LED display, not the best in the world, but it gets the job done, displaying the necessary information. With this being cordless all the buttons are on the build, meaning that if you want to use the mute button you will have to lean forward to the windshield, not a position I like being in while driving. Still, if you use it in a motorcycle that isn’t really an issue. The mounting bracket is far from the best thing in the world, but it gets the job done. Be careful on pot hole filled back roads, as the suction cups are simple, without glue.

The lack of an app limits the utility of the build by quite a bit. There is also no smart learning function, so even if you mute it while going past a known false positive area it will not learn the location like other builds. This can be a long term annoyances for some. So long as you turn the volume down a fair bit it should be okay. The range is good, a little over a mile in poor conditions, which should be more than enough time to correct. The 360 degree detection on board is impressive, as a fair number of builds in much higher price brackets come with just the one forward pointing sensor, making direction hard to determine.

The key selling point here is form factor and battery power. This makes it an attractive options for those who want protection while out on a bike, and it allows the relatively feature light build to become a minor contender in that specific niche. You get about 12 hours of battery per charge, depending on how often it goes off, which is impressive. There is a filtering algorithm in here, and it works well enough, but even the most advanced filters let false positives through, and this is far from the most advanced software on the market.

One of the key features being pushed by all the radar detector firms is the Laser, or LIDAR detection system, and i have to tell you, it is terrible. Well, not terrible, but the way the tech works, and it does work, is so circumstantial as to be useless. There are better options, and I mention them later in the article. At their core LIDAR works as a whole point system meaning if the detector goes off for laser you have already been hit. It can, in rare cases, pick up the refraction from a vehicle in front, but the stars don’t align for us nearly often enough to take advantage of that. Bear in mind that some modern radar guns shot out short point to point bursts as well, they are rare, but they do exist, and picking those up is difficult. thankfully the Whistler comes with POP detection as standard, making it a little more capable.

Well, I knew what I was getting into when I got this one. The Whistler is far from amazing, but it does what is required. For some this simplicity is a selling point, not for me, but then I love my gadgets so… Still, the compact design coupled with the cordless nature of the build gives it an easy niche to target. If you are looking for something bare bones this is by no means a bad choice.

I’ve written more than a dozen reviews on radar detectors, and I am still bemused by the legality section. I think it’s important, else it wouldn’t be here, but it is still a little weird to me. Anyway, first off, if you are reading this from outside the US I regret to inform you that radar detectors are probably illegal in your country, there is a very short list of countries where they are legal, and the one I concern myself with is the US. In the US there are a few restrictions in place, two states ban their use, Virginia and DC.

They are also prohibited on US Military bases. In addition, two states place restrictions on what you can put on your windshield, Minnesota and California both have obstruction of vision laws, so be sure to find an alternative place to fix it when traveling through those states. Finally, Radar jammers are illegal everywhere, but LIDAR jammers are not. I mentioned earlier that LIDAR detectors have a very limited utility, and I stand by it. For complete coverage you would do well to combine a radar detector with a LIDAR jammer. Be warned though, some folk have been taken to court on obstruction of justice charges through using LIDAR jammers. At your own risk folks.

And now we get to the price, and oh my god I have no idea how they can charge so little for this build. On average you are looking at sub $50. There are literally no radar detectors (that work) in this price range, except maybe some older Cobra builds second hand. When you look at the features it makes a bit more sense, but it’s still amazing. If you are looking for something on the fly to use on a motorcycle this is an excellent option. You can sometimes even find it on sale at Amazon.com Here (if you want an even better price.)

Now to the warranty. I cannot find one. Not something I am happy to say, but if you dig around through the paper work and search the web for information and come up empty handed that really is a fault on the end of the manufacturer. Thankfully buying from Amazon comes with a variety of consumer protection policies, but I would still have liked to see a full on factory covered warranty with this model. If you do buy be wary of that, but considering the price is pretty much 2 hours of work for even the minimumist of wage earners I don’t consider it a black mark.

This has been a very pleasant surprise. That price makes finding a detector jammer pair far more affordable, and I feel if you take the time to get used to the build, setting it up so as to not be the most annoying thing in the world you will go far with your Whistler. The lack if warranty is of course a cause for concern. I review products for a living and I know how important in terms of peace of mind a good warranty can be. Just be sure that if you do decide to go with the Whistler that you get it from a reputable dealer, like Amazon, to be assured of good protection in case of a fault.

An interesting options overall. I don’t know if it would be my first choice, but then I don’t need a cordless radar detector. If you do, then this is on the list, right there in impulse purchase territory. I mentioned earlier the combination option, buying a LIDAR jammer alongside a Radar Detector, and low cost detectors like this make that option very viable for all consumers. If you are in the market for a radar detector that can get the job done, and works well on a motorcycle, then you have to take a look at this low cost build.

To check out the current deals on the XTR-540 at Amazon.com click here.