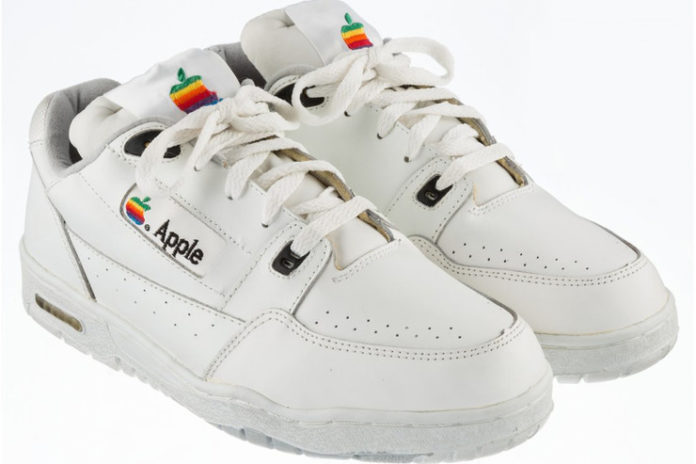 Before Apple had the iPhone and iPad, the company tried to get into the clothing business. The clothing and accessories were only part of the plans for a few years. But now, one of the most interesting items created by the tech giant will be sold on eBay. We’re talking about Apple branded sneakers, which will be auctioned by Heritage Auctions on June 11. The sneakers will be listed on eBay with a starting price of $15,000.

Given To Apple Employees

The sneakers are extremely rare as the company never released them. Employees did receive a pair during the prototype process. The sneakers feature the rainbow Apple logo on the side and on the shoe tongue. Pairs in good condition are extremely valuable as they were only given to employees, which means only a limited amount were made.

Old Apple devices have sold for lots of money in the past and Heritage Auctions estimates that the value of the sneakers is actually around $30,000. The sneakers will be listed for half of that but it wouldn’t be surprising to see them sell for a lot more. Old iPods have sold for thousands of dollars in recent years and the Apple sneakers are even more rare as they were never sold.

Last month, a rare Apple-1 computer sold at an auction for $130,000. The computer is just one of the 200 created and one of the few that actually work. The sneakers may not reach that number but they could sell for more than $15,000 when they go on auction.

Heritage Auctions will auction the sneakers on June 11 with a starting price of $15,000. The sneakers were created by Apple in the early 1990s and were part of the company’s collection that also had clothes, bags and accessories. In 2007, a pair of used Apple sneakers were sold on eBay for $79.