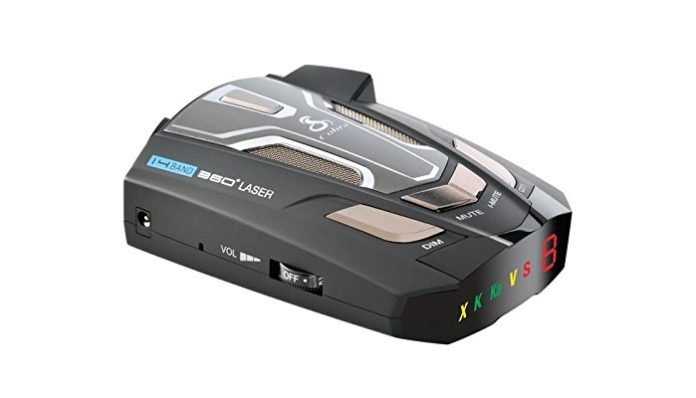 I’m going to be making a minor deviation from the norm here. I went out of my way to find the cheapest radar detector on the market right now that can do all the things I want it to do. Not too much of a surprise that it turned out to be a Cobra build, and a legacy one at that. It means that getting your hands on it is a little difficult, or at least it’s going to be in the coming months. The SPX 5400 is a slight upgrade on the 5300, but is a few dollars cheaper right now. The main things I was looking for is range, filtering and app integration. With those three things we can do some personal tweak sand have it running as good as the best of them.

I love reviewing products, when a new set of times comes down to me I get to spend a week or two in research mode. Finding out what is selling, why is selling and how is selling. One of my favorite parts is the tech research, finding out how the hardware has evolved over the years. With everything else I have reviewed there has been a nice lilting curve of improvements extending from introduction to the now. With radar detectors there was not lilting curve. The tech has remained pretty much the same for decades, which makes sense, I mean, radar waves are the same now as ever. So why are you being charged so much for the high end builds? The answer is in the integrations and the advanced software. A lot of last generations top end hardware had more than simple radar detectors inside, many had GPS systems and Bluetooth. These days that is giving way to app integration. The core advancement is still in the software, taking the same data and being able to sort the wheat from the chaff. When you spend the money you get a product that you can use with little changes to the settings. So that means if you buy cheap, you can tweak the settings, do the research and end up with a day to day experience that is near on par with a product more than ten times more expensive.

So let’s get to the review proper, let me show you why this is the best budget build on the market right now.

When you spend this much money you are not going to get the prettiest build on the market. Know that off the bat. This is par for the course for the SPX range, the 5400 is aesthetically very similar to the 5300. There is no symmetry, overall it is too busy of a design. The display is great though. You tend to find with legacy builds you get a block form LED display, looking like a clock radio circa 1985. And that is true here, but rather than just the one type of LED Cobra used a variety of colors, allowing the user to see what kinds of signal was incoming at a glance. The effect is very pleasing. There have been some reports of bright sun rendering the display unreadable, but I never experienced this. I did with the SSR 80 though, so maybe it just wasn’t bright enough here. Regardless, the alert sound is great, and really lets you know that a signal is out there.

The weight of the build is fine. I prefer a bit of heft, so this being so light is not to my preferences. it has been a minor issue for the SPX series as a whole, but it does mean that you needn’t invest in a sturdier mounting bracket. The standard Cobra bracket that comes with this is the older click and suction cup style, rather than the new mag lock and sticky suction cups. If you are worried you can pick up a third party mounting bracket pretty cheap, and considering the price of this build you will not be breaking the bank should you do so.

The SPX series is old at this point. So the software is a little non-updated. It’s still pretty good at filtering the reals from the fakes, but it isn’t nearly as good as, say, a modern Escort build at it. Granted, not even a modern escort can filter everything all the time, but by and large, the more you spend the better the filtering. You can use a few tricks to mitigate the false signals though, such as using the on board auto mute, combined with a few other things you can get the false positives down to a few times a month, if that. I’ll talk about the big one in a moment.

There is little in the way of bonus features. There is the pop protection mode, for the short burst radar speed detectors, but this build lacks VG1 mode, nor does it have spectre protection. For the most part that should not be an issue, I mean, radar detectors are not illegal, so having it get detected is no big deal, but I realize that this means that some folk might want to look elsewhere for their radar detector. There are a few city modes, but that’s about it. The range of the build is standard for the time. Nothing to write home about, but able to do exactly what i want it to do. On highways you are looking at a round 2 miles on average, perhaps more. it depends on the conditions.

The iRadar app is what elevates this build to the top of my low end picks. The SPX series is not compatible out of the box, but with the addition of a nice cable, sold on the Cobra site, you can plug the SPX 5400 directly into your phone, and make full use of the iRadar. It provides you with real time updates, from everyone else who is connected, and a handy map. It augment the range ten fold as well. The auto mute function can be combined with the app to make sure that you are only bothered by real signals, this is what i was talking about. So long as you pay attention to your surroundings, you can make the SPX 5400 as good as a Max II in almost every way.

The last thing I want to talk about is the laser eye feature. It is on every radar detector these days, and I get why. It is supposed to be an answer to the laser speed camera question, and while it does work as intended, it is no where near as useful as some think. Doesn’t matter how much you spend, the laser eye on every radar detector is too circumstantial. It’s all down to how the laser works. The beam is narrower, the point to point more accurate, and the refraction far less than even a pop radar gun. It means that the laser eye only really warns you after you have been hit with it. It can pick up on refraction, in perfect conditions, but the range is no more than a few car lengths, not exactly the best warning out there. I have another solution to the issue, but I will wait to go into it in the legality section, as there are a few issues to cover.

Not the most impressive build, I would be the first to admit that. The look of the build leaves much to be desired, and the core features aren’t great. The range of the build is okay, but the ace in the hole is the iRadar integration. The SPX range has a cable to connect directly, giving you access to so many new features. When we add in the price this becomes one of the best out there.

I loved researching this section. If you drive a commercial vehicle I am afraid that you cannot use a radar detector at all. There are two states that ban their use outrigh If you are reading this outside the US then I am sorry to say that for the most part radar detectors are illegal in your country. If you cross the northern border regularly be careful, as they are illegal in Canada as well.

I am not a fan of the LIDAR detection features, the aforementioned Laser eye, that is in every radar detector build these days. I want to talk about an alternative, one that is guaranteed to work. A laser jammer. Now, it must be stated that radar jammers are illegal everywhere, pretty much all over the globe. Laser jammers are not yet covered by any legislation, though that may change eventually. They hide your details for a short time, alerting you and giving you the time to correcdt course before deactivating. Full protection can be acheibved by combining a radar detector with a Laser jammer. I have seen some reports of people being brought up on obstruction charges as a result of sing a Laser jammer, but most of these are in the UK, best still to use with caution, and verify no local reports.

This, along with the app integration, is the reason I choose the SPX 5400. On average you can find this build for less than $40. I have it listed here on Amazon for $35, and frankly that is an astounding price. There is literally no other build on the market that can boast that, not even the less advanced SPX 5300.

I am sad to say that the radar detector market for the most part have very middle of the road product warranties. The standard Cobra warranty is for just a year, and covers only factory faults. I would argue that any product that breaks within a year automatically counts as a factory fault, but you may have to press that issue, I have in the past. For best results I recommend you go for a licensed third party, via Amazon. That way you get the Cobra Warranty, whatever coverage offed by the third party, and finally all the consumer protections offered by Amazon on top.

Know what the law is. I feel it is very important, especially in the Radar detector market. So long as  you know what’s up you can protect yourself, and that’s what radar detectors are for. The price asked for here is fantastic, well worth it. The warranty might be a little less impressive than I would like, but smart purchasing habits can mitigate any bad warranty.

The SPX 5400 is one of my favorite models, and you can be damn sure it’s going to be in my personal top ten next week. The price is amazing, the core features are fine, and that app integration is stellar. The app is why we are buying after all. When I first started this series of reviews I was unimpressed with Cobra, but now I know who they are aiming for, and they have hit the nail on the head with this build. Excellent all round.