Cody Simpson is a multitalented twenty year old who is a self-described singer, musician, dancer, actor, and songwriter. He toured with Justin Beiber and performed on Dancing with the Stars.

How Cody Simpson Got Famous

Cody was born on January 11, 1997, on the Gold Coast of Australia. He is the oldest of his siblings. His mother Angie did volunteer work at the Miami Swimming Club, and got Cody Simpson involved. This paid off, and Cody went on to win two goal medals at the Queensland Swimming Championships.

When Cody was 12, he started a Youtube channel and began churning out cover tune videos that he recorded in his bedroom. He sang pop songs such as “I’m Yours” by Jason Mraz, “I Want You Back” by the Jackson 5, and “Cry Me a River” by Justin Timberlake. These Youtube videos eventually got Cody discovered by Shawn Campbell, who is a Grammy-nominated songwriter and producer who has worked with Jay-Z and Missy Elliot.

When Cody was just 13, he released his first single which includes famous rapper Flo Rida called iYiYi in late spring of 2010. Shortly after, Cody Simpson’s family moved to LA, California in order to support his career. He recorded his first album with the man who discovered him on YouTube, Shawn Campbell, who worked for Atlantic Records. Later that month, Simpson announced that he would be going on tour with a bunch of other artists for the Camplified 2010 Tour, which is described as “Coachella for the Tween Generation.”

His premiere album, Coast to Coast, came out in fall of 2011. It was released by Atlantic Records. It eventually got to the the top 20 in the US Billboard Hot 200 chart. To promote the album, Cody released a single called On My Mind in the spring 0f 2011, and performed it on the Today Show on August 5th, 2011. On the sixth of that year, he began a tour in malls around the country to promote the album. Days after Coast to Coast was released, Cody Simpson told the word that he partnered up with Scooter Braun as his manager. This is significant because Braun is international pop star Justin Beiber’s manager as well.

After releasing his second studio album “Paradise” in late fall of 2012, Cody Simpson went on a tour of Europe, both alone and with Justin Beiber. His third album, Surfer’s Paradise, came out just a year later. It debuted on the Billboard 200 chart in the top ten. From 2013 to 2015, Cody was a busy young pop star. He released an acoustic album, competed on Dancing with the Stars, went on a tour, and left Atlantic Records. His next album was released in the summer of 2015. Soon after, he took a break from his solo work to form a band called Coast House Records. Around the same time, he also did some actin work on Cougar Town, as well as a Nickolodeon movie called One Crazy Cruise.

While Cody Simpson is currently single, he has dated many celebrities and non celebrity women in his young life, including model Charlotte Lawrence, Joanne Heraghty, Stella Huygens, Bella Thorne, Kylie Jenner, Gigi Hadid, and Sahara Ray. In 2016, Cody Simpson is rumored to have dated model Sierra Swartz, who survived the Santa Barbara massacre by young gunman Eliot Rodger. That relationship did not work it, even though she bore a striking resemblance to Cody’s ex Gigi Hadid. 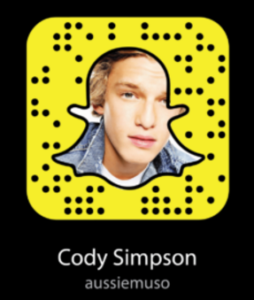 Although it does not appear like Cody Simpson has a public personal Facebook page, you can follow him at his official music page by clicking here. The twenty year old singer has over seven million people liking his page, and almost as many followers. He posts promotional photos, memes, and occasionally personal reflections on current events, like he did for the US pulling out of the Paris Climate Accord in May of 2017.

Feel free to join Cody’s 3.3 million Instagram followers by clicking here. He posts many promotional photos as well as a few videos of himself playing guitar, or boxing. A few of his 1,111 posts are more personal things such as a plea to stop offshore oil drilling and a few pages from a personal journal.

Twitter is the best place to follow Cody Simpson if you want a personal experiance. Many of his postings are retweets or replies, and his actual tweets are peppered with personal commentary. According to one tweet in particular, he “Was just stalking a bunch of fan accounts on Instagram and it made me so stoked! I love you all so bloody much its not real!!!” To join his 7.8 million followers, and get in on the action, click here.

What is Cody Simpson’s Kik Username or Code?

According to the Wikianswers community, Cody Simpson’s Kik name is CodyRSimps.

Cody Simpson does not appear to have an official Youtube account. There is a channel called CodySimpsonVevo, but it does not have the official check mark, and it has not been updated in over two years. A more recent channel is for Coast House under the user handle codysimpsonmusic. This one does not have the verified check mark either, but the video on it have millions of views.