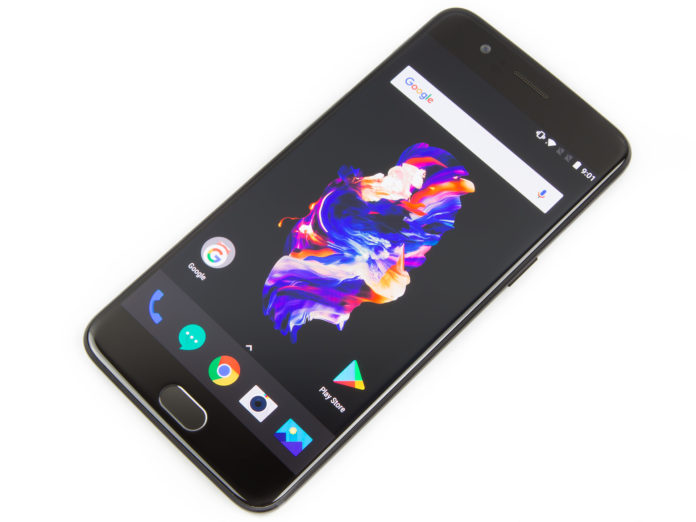 After much speculation and several leaks later, the China-based smartphone manufacturer has finally unveiled the latest iteration of its ‘flagship killer’, the OnePlus 5 – skipping the number four which is considered an unlucky number in Chinese culture.

The OnePlus 5 will come in two variants: the $479 version and the more expensive $539 version. At $479, customers can expect to get a ‘Slate Black’ aluminium-clad pocket computer sporting 6GB of RAM and 64GB of storage as well as a 2.45GHz Snapdragon 835 SoC and a 3300mAh battery. The $539 ‘Midnight Black’ version, on the other hand, provides a whopping 8GB of RAM and and additional 64GB of storage, bumping it up to 128GB.

Both variants will contain OnePlus’ signature 3-way alert switch, a USB-C port, capacitive buttons with a front-mounted fingerprint reader, and a headphone jack. The new flagship also has two cameras on the back: one 16MP main camera and one 20MP telephoto camera, arranged in what many have described to be similar to that of the iPhone 7 Plus.

Starting at $40 and $80 more than the OnePlus 3T and OnePlus 3 respectively, it is worth noting that the OnePlus 5 is significantly pricier than its predecessors which have been marketed as affordable-but-powerful alternatives to their flagship competitors. However, Ars Technica points out that compared to other Snapdragon 850 devices such as the $750 Galaxy S8 and the $650 HTC U11, the OnePlus 5 is still very much affordable to a considerable degree.

With Google dropping its Nexus line and Lenovo’s clumsy approach to previously Google-owned Motorola, OnePlus has emerged as the go-to alternative for those seeking a clean stock Android-like experience with a beautifully designed hardware. 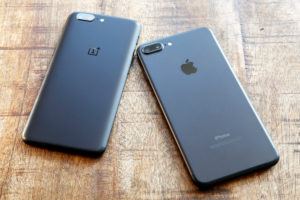 Many have noted that in spite of flagship phones such as the Galaxy S8, LG G6, and, according to rumors, the iPhone 8 shifting towards bezeless displays, OnePlus has insisted on maintaining a conservative design with tall top and bottom bezels as well as a front-facing hardware fingerprint reader.

In fact, several reviews have stated that the OnePlus 5 looks a lot like the iPhone 7 Plus with an almost-identical camera, microphone, and antenna layout. Even the front strikes an uncanny resemblance with its front camera, earpiece, and home button placed in the same location. According to Ars Technica, in spite of Android phones occasionally borrowing design ideas from Apple, the OnePlus 5’s design “crosses over into embarrassing knockoff territory, especially when smartphone design has improved so much in 2017.”

In an admission to The Verge, OnePlus expressed their initial desire to provide a bezeless screen, but was unable to deliver because they lacked the technology its larger competitors have to make it happen.

Overall, the software experience on the OnePlus 5 is almost identical to that of its previous iteration with a few updates and improvements, notably its ‘Gaming Do Not Disturb’ and reading mode.

The new device runs Android 7.1.1, which already puts it ahead many of its competitors, but OnePlus will not guarantee monthly updates. Rather, it will “try to keep up as much as it can” with Google’s security updates.

Like many manufacturers that use their own operating system (OS), OnePlus has struggled to provide software updates to its older units, particularly those that came prior to the OnePlus 3. In fact, the company has announced that it will no longer be providing an Android 7.0 update for the OnePlus 2 after promising to do so – a move that has upset existing OnePlus 2 users.

All in all, many see the OnePlus 5 as a promising phone that provides value for money. For just below $500, users can expect a phone with stellar performance that competes with well-established flagship devices. However, many commentators have also criticized its overly iPhone-like design and lack of after-sales support.

While new flagships often impress customers upon their first release, their true value lies in how they fare long after their purchase.

Aug 13, 2020
Fall Guys: Ultimate Knockout is getting a patch that comes with multiple fixes and a new level. The Mediatonic game was released for Steam...