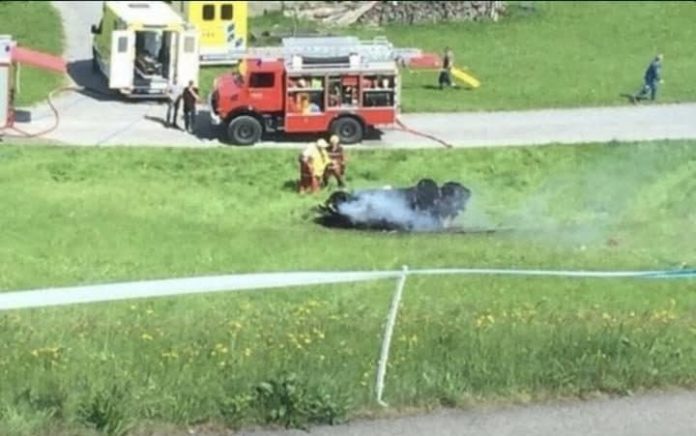 Grand Tour host Richard Hammond was airlifted to a hospital after a crash in Switzerland. The former Top Gear host crashed his car while filming for his Amazon show, The Grand Tour. The accident happened in the city of St. Gallen in northeastern Switzerland. The host crashed while driving a Rimac Concept One, an electric super car worth around $1.4 million.

Pictures of the crash show that the vehicle flipped and caught on fire. Jeremy Clarkson said on Twitter minutes after the crash that it was the biggest crash he had ever seen and the most frightening but that Richard seemed to be mostly OK. Amazon, which signed the three hosts to a huge deal for the new car series, also spoke about the accident and confirmed that Hammond was OK. According to an Amazon spokeswoman, the host was involved in a serious crash and had a fracture to his knee. The spokeswoman added that Hammond very fortunately suffered no serious injury. She finished by saying that he was conscious and talking and that he climbed out of the car before it caught on fire.

It is not the first time that the Grand Tour host suffers a scary crash while filming. He recently fell off a motorcycle while filming an episode. He also suffered serious injuries during a stunt for the Top Gear series years ago.

Hammond was airlifted to the hospital after the crash, which was caught on video. The video shows the car crashing during a turn and falling off to the side.

In 2015, Hammond May and Clarkson signed a huge deal to be part of a new Amazon series. Clarkson was fired from Top Gear after an incident with a producer. The two other hosts left the show shortly after and took some months off before agreeing to a deal with Amazon.

The deal is for three seasons and the series debuted in November 2016. The first season ended four months ago and the car crash today happened while filming for the new season. May recently revealed in an interview that The Grand Tour season two is coming in October. The Grand Tour official Twitter account recently confirmed that Hammond suffered no serious injury.