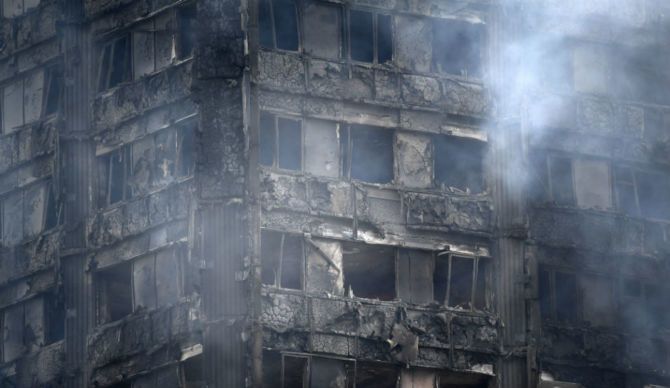 The fire that burned most of the 24 story tower in central London has left 12 people dead. The fire began when most people were sleeping and it quickly spread, burning most of the structure. The death toll rose to 12 earlier today but authorities say the number could increase in the next few hours.

Hundreds of firefighters and more than 30 fire trucks were sent to the scene. The firefighters worked for hours to contain the fire. Emergency teams were still battling the fire 15 hours later. Steve Apter, a member of the London Fire Brigade, said that the fire was unprecedented in its speed and scale. He confirmed that 65 people had been rescued from the building and that emergency teams had searched most of the tower. According to recent reports, more than 60 people are currently at nearby hospitals. 18 of them are said to be in critical condition.

London Police Commander told reporters in the area that the death toll was likely to rise. He added that he did not believe more survivors would be found in the tower. Authorities don’t know what started the fire but will begin investigating soon. The building had recently undergone major renovations and some experts have blamed the cladding for the spread of the fire. The renovations, which reportedly cost more than $12 million, were done in May 2016. The cladding material installed during the renovations is now being mentioned as one of the reasons on why the fire spread so quickly.

The fire on the tower burned most of the building and some residents say no alarm went off to warn them. Around 600 people were living in the tower, which was completed in 1974. The renovations last year added the cladding material and windows.

Residents are now staying in community centers across the city. Many of them woke up to the smell of smoke and quickly rushed to the stairs to escape the fire. People living near the building were evacuated because of falling debris and concerns that the structure could collapse.

The government has ordered safety checks for apartment buildings that have gone through renovations in recent years or are currently in the middle of one. Reports of the cladding material spreading the fire have raised concerns as the material could have been used for other buildings.

JustGiving, other charity organizations and residents are now helping raise money for the families of Grenfell Tower. Fulham, QPR and Harlequins are also helping the families.