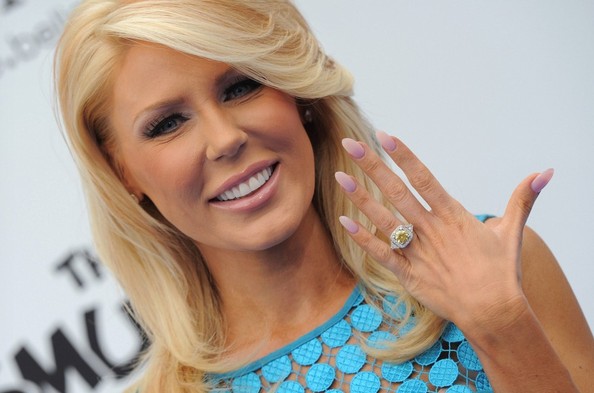 Known as one of the blond bombshells of the Reality TV world, Gretchen Rossi would become an icon of the show The Real House Wives of Orange County. While occasionally doling out emotional details of her past, but keeping plenty secret, her secrets and 4 seasons of appearances captivated the audience for years. But it’s been quite a while since she’s been in the spotlight and many wonder what Gretchen Rossi has been up to these past few years. Here, we take a look back at her life as well as see what Rossi has been up to in 2017.

The Early Years and Real House Wives of Orange County

While Rossi has kept most of her past close to the chest, there are a few things we know about her from her days before reality television. She was born on October 30, 1978, in the state of Michigan, and grew up primarily within the town of La Crescenta, California. She then ended up getting a Psychology degree at Baylor University in Waco, Texas and then tried her hand at the real estate business well before the economic downturn of 2008. During this time she would meet her first fiancé, who would end up dying of Leukemia, causing her to regularly work alongside organizations that help fund research against the disease. It is rumored to this day she is still in close contact with the children of her late fiancé.
After this event, she would find herself in the whirlwind of reality television, being picked up by the Bravo! Real Housewives series, this time set in Orange County, California. Appearing in the 4th through 8th seasons of the program, she would quickly make an impact with personalities and fans alike. Somewhat entertaining is the fact that during her connection with the series, she would end up in a relationship with Slade Smiley, who was recruited to film a show called Date My Ex: Jo and Slade. In this show Slade would help his ex, Jo De La Rosa, get to know new people on televised dates and advise actions thereafter based on what he and friends saw of the guys. While this series only lasted a season, we will soon see that Slade and Gretchen Rossi have lasted much longer so far.

Lord of the Freaks and Smiley

In 2009, not long after being picked up on the Real House Wives of Orange County, Gretchen would also appear on the A-List Awards of 2009. Hosted that year by Kathy Griffin, this show award event has often been called the “Award show for the Who’s Who of nobody”, and had a certain comedic flair about it, with which Gretchen acted gracefully. Outside of this event, she would not be seen outside the reality show for much work until 2015, where she would appear on Lord of the Freaks.
Showing up as herself in this odd chronicle, this was Rossi’s first film appearance and depending on who you speak to, it was either a film of great artistic merit or of the pure grotesqueness of humanity. Chronicling primarily the stunts either pulled or funded by media mogul and Coca-Cola heir Alki David, the movie depicts some of the darker fringes of what people do for attention, money, or curiosity. This has included Alki paying $1 Million for someone to streak during a speech done by Barack Obama, and a man who got crucified on television. Central to this movie is the asking of why, and very little being explained, except that the world can provide an audience for nearly everything. Rossi herself played a minor and thankfully harmless role in the film, and likely found some content of interest as a result of her previous psychology experience.

In the same year, Rossi was slated to marry Smiley in May. This, however, was not to be. Not due to a breakup or any huge relationship issue, but instead due to logistics. It appears that the planning had failed to be in enough advance for friends and family to work schedules around the wedding and yet to have occurred to this day. In the meantime, Slade and Rossi both planned on having a child sometime soon, as they now owned a three-bedroom house, and Slade went through a “de-snipping” process for her 37th birthday.

In recent years, Gretchen Rossi has had a few ups and downs. While still trying to get pregnant, it has been revealed that the vasectomy process may not have been successful for Slade, and IVF has likewise failed. Likewise, the wedding has yet to take place, partly because of Slade’s previous debts being a deterrent, though this seems to be less the case in recent months.

Another struggle for Rossi is her ex-acquaintance Jay Photoglou and a lawsuit between the two. Rossi has claimed and won in previous cases that Photoglou had stalked and threatened her, as well as cost her a great deal of work as a result of threats and the leaking of nude photos. In the previous lawsuit, Rossi won around $525,000, with Jay quickly filing bankruptcy as a means of not paying it. As one can surmise, Rossi quickly took legal action yet again to get her money. This already complex situation has been compounded by the fact that Rossi’s lawyer, Anerio Altman has filed a request to be relieved from the duties of being her attorney. This has been for multiple reasons, including a claim that Rossi has failed on multiple times to heed instructions, large personal issues between the attorney and client, and no prepayment of legal fees which would otherwise bind Altman. Suspiciously, not long after this motion was filed, it was dropped and reconciliation may have occurred.

Lastly, Gretchen Rossi has had rumors appearing that she may show up in Real House Wives of Orange County’s 12th season. This will likely be far from the guest star status of “Friend” though, as sources indicate that she will only appear in one episode if that. Appearing at a party for former costar Vicki Gunvalson’s birthday party, it’s unclear if the footage will make it past the cutting floor for the series itself. Fans may have some solace in that Vicki does want Rossi back in the next season of the show, which can allow for more screen time and entertainment from the reality star.

To keep up with Gretchen Rossi be sure to follow her on social media. Her Twitter username is @GretchenRossi and her Instagram handle is @gretchenrossi. The reality star also continues to drop new products from her fashion line, Gretchen Christine. Be sure to check out her blog and the new vegan handbag line at gretchenchristine.com.