Niall Horan is a 24-year-old singer from Ireland who is best known for his work in the band One Direction.  In addition to singing with the band, he has also call written many songs of theirs such as Summer Love and Don’t Forget Where You Belong.  While Niall has done some solo work, he has recently stated that he would give it all up for a One Direction reunion.

How Niall Horan Got Famous

Niall Horan of One Direction fame was born Niall James Horan on September 23rd, 1993 in Mullingar, Ireland. A child of divorce, Niall split his time between his parent’s houses before ultimately deciding to move in with his father and older brother. One Christmas, his brother Greg received a guitar, and never actually played it. Niall was taken with the guitar, and began to teach himself to play using Youtube tutorials.

Once he’d practiced enough, Niall Horan performed at a fundraiser for his local football team at the Mullingar Arts Centre. He also sang on stage with Lloyd Daniels at the Dublin Academy club. At the young age of sixteen, Niall auditioned for X Factor in Dublin, which is like the British version of American Idol. He performed a version of the Ne-Yo song So Sick, which was met with mixed reviews from the X Factor judges. His fate was ultimately decided by guest judge Katy Perry, who moved him on to boot camp in order to hone his craft.

Niall Horan was unable to cut it on his own, but the judges saw his talent and decided to make him part of a group, along with Harry Styles, Liam Payne, Zayn Malik, and Louis Tomlinson. While the group, named One Direction by Harry Styles, only reached third place in the competition, they still received a record deal with Simon Cowell.

One Direction became enormously popular with teenage girls.While they were recording their new album, the word on the XFactor live tour in February 2011. Once they came out with their first studio album, up all night, it went straight to number one on the United States Billboard Top 200. They went out again on tour to promote that album.

Only a year later, they came out with their second studio album called Take Me Home. This one also reached number one in the UK, Australia, the United States, Canada, New Zealand, and Ireland. Around this time they also came out with a movie called This Is Us which was directed by Morgan Spurlock of Supersize Me fame. Niall Horan, along with the rest of One Direction, released a third studio album called Midnight Memories which was released on November 25, 2013. They went on to record another two albums together before taking a hiatus.

After One Direction took a break, it was announced that Niall Horan got a deal with Capitol Records as a solo artist. Niall’s album has not come out yet as of the date of this post, but he has released two singles. The debut single, This Town, came out in late fall of 2016 and reached number 20 on the Billboard Hot 100 charts. The next single, Slow Hands, came out on May 4 of 2017. The song has a heavier feel of rock, mixed with R&B. Since its release, Niall Horan has performed it on TV talk shows such as the Ellen DeGeneres Show and the Tonight Show starring Jimmy Fallon.

Since becoming famous, Niall Horan has been busy dating many celebrity women. Since 2009, the Irish pop star has dated Holly Scally, Amy Greene, Louise Thompson, Zoe Whalen, Barbara Palvin, Thalia Heffernan, Melissa Whitelaw, and Suede Brooks. 2016, it was rumored that he was dating a nonfamous Belgian student named Celine Helene VanDycke. Although there are photos of them getting cozy with each other at a Mumford and Sons concert, Niall never confirmed that he was with her. As of May 2017, Niall Horan is single. 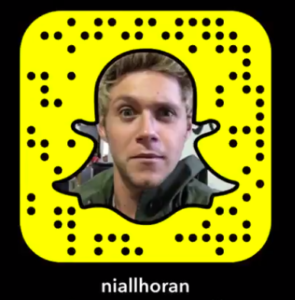 While there are five different Facebook profiles that claim to be Niall, the only real one is his official Facebook page. His Facebook page has over 10 million likes and almost as many followers. You can join them by clicking here. The page features things such as the video for his latest single, announcements of live shows, and recaps of television appearances. If you dig back to May 9, 2017, there’s even a super cute photo of a seven-year-old Niall holding a toy guitar in front of a microphone.

You can join 19.3 million people following Niall Horan on Instagram by clicking here. Niall has an interesting approach for some of his Instagram posts that is best viewed on a computer. Each individual picture is the segment of a larger whole, made up of 6 to 9 smaller photos. Sometimes Niall also posts individual photos such as him with his dog, or himself playing golf.

On Twitter, you can find Niall under the handle Niallofficial, or by clicking here. Niall has almost 30 million followers and has tweeted almost 12,000 times. Most of the tweets are a promotion of his music or announcements of television performances, but sometimes Niall gets personal. Recently he posted his feelings on the recent Manchester terrorism attack, and sends his thoughts out to the “great people of Manchester and Ariana Grande.”

What is Niall Horan’s Kik Username or Code?

It does not look like Niall Horan has a personal Kik account, or at least not a public one.

Niall Horan has an official Vevo account which you can follow by clicking here. Even though it only has seven videos posted in the last couple months, he still has over 1 million followers. You can find lyrics videos, as well as behind-the-scenes footage of his latest singles.