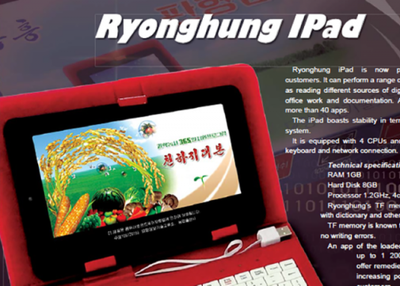 The iPad name is about the only thing they have in common as the tablet looks like any other tablet that can be found in a retailer for less than $50. According to the picture of the product, the tablet’s specs are: 1.2 GHz processor, 1GB of RAM and 8GB of storage. No other specs are mentioned. The picture does reveal that there are more than 40 apps.

Customers do get a keyboard with the tablet, which is something that is usually sold separately. The Ryonghung IPad has actually been in the country for years but it had a different name back then.

Tablets are available in North Korea but they are a little different from what we’re used to seeing in other countries. The tablets there do not have access to the internet. There also isn’t a huge selection of apps that can be downloaded to the tablet. Internet access is something that many North Koreans don’t have access to. The few people who actually get to access the internet are government officials and students in some universities.

Electronic devices such as smartphones and tablets are not rare in the country but the latest release has caught the attention of the rest of the world for having almost the same name as one of Apple’s most popular products. The Ryonghung IPad is now being advertised in the country but its price has not been revealed. North Korea has released other iPad clones in the past but this company is now taking it to another level by even using the name.