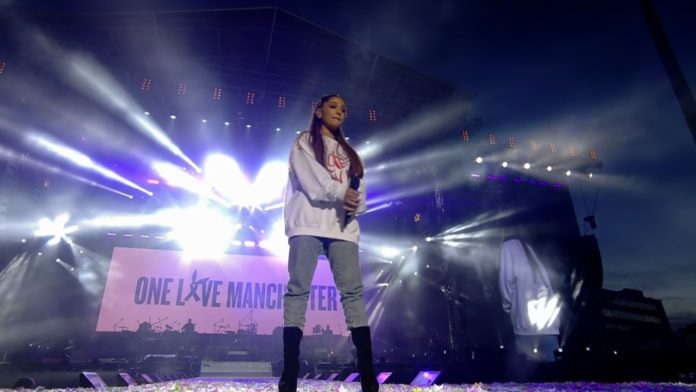 Ariana Grande’s One Love Manchester concert on Sunday was watched by more than ten million people on BBC One. The tribute concert, which featured many artists, sold out in less than 30 minutes.

The numbers on BBC One were around 10.9 million viewers but the concert was also streamed on radio stations and websites around the world. The YouTube live stream had more than five million views in just a few hours. Various streams were also shown on Twitter and Facebook. Over $2.58 million were donated to the We Love Manchester Emergency Fund during the concert.

The concert featured artists such as Justin Bieber, Pharrell, Liam Gallagher, Katy Perry, Coldplay, Mac Miller, The Black Eyed Peas and Miley Cyrus. Many of the artists confirmed they would be at the concert shortly after it was announced by Ariana Grande. The event took place at the Emirates Old Trafford Cricket Ground. The event sold out in 20 minutes.

All One Love concert proceeds will go towards helping the victims and families affected by the attack at Manchester Arena on May 22. The attack, which happened after a concert by Ariana Grande, left 22 people dead and more than 50 injured. Ariana Grande promised shortly after that she would return to Manchester. The concert was confirmed last week on a Twitter post by the singer.

Grande also returned to Manchester to visit victims at the hospital. One injured fan attended her concert on Sunday. Those who were at the concert on May 22 received free tickets for Sunday’s event.

The total of viewers for the concert is not yet known since it aired on many platforms across the world. The concert raised more than $2.58 million during its three hours. Sunday night’s One Love Manchester concert was the most watched program this year on British television.