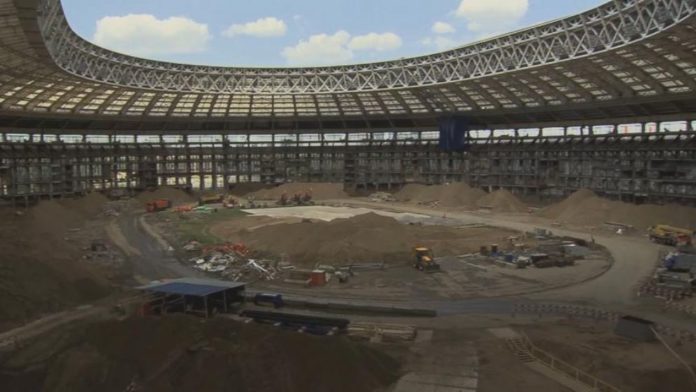 A report has revealed the dire labor conditions behind the 2018 World Cup preparations. The Human Rights Watch report reveals that at least 17 workers have lost their lives in construction sites.

The report found that many of the workers are working in extreme weather conditions and have gone months without receiving a payment. Some of the workers who are receiving payments say they are not receiving the amount promised. The labor conditions have been a huge topic of the 2022 Qatar World Cup but the new report shows that the problems may not just be in Qatar. Russia will soon host the Confederations Cup and is getting ready for the World Cup next year. Some of the venues and stadiums have been completed but the country is still making preparations.

According to the organization conducting the inspections in the stadiums, eight workers have lost their lives at the Krestovsky Stadium. Plans for the stadium began in 2005 and it was scheduled to be completed in 2008. But increasing costs and delays made the wait for the project even longer. The other deaths have happened at other stadiums under construction. Half of the deaths reported were migrant workers.

Russia, which will be hosting the World Cup next year, has continued its preparations for the sporting event and while not much has been reported about labor conditions, the report reveals shows that it’s not just Qatar. The 2022 edition has been heavily criticized in recent years, with reports of inhumane conditions for its workers.

The selection of the next two World Cup hosts has also been heavily criticized since 2010. The 2022 edition has been the most criticized, with FIFA even having to change the tournament to winter due to the weather conditions.

For the Human Rights Watch report, 42 workers were interviewed. Some of them said they had not received any payments in months. One of them explained that no contracts had been prepared for them. Workers also complained about the weather conditions they are working on.