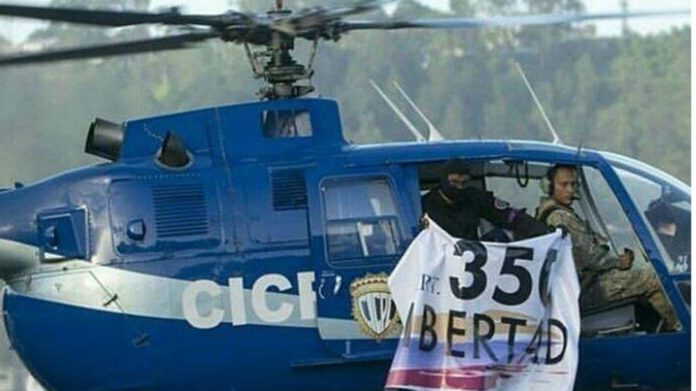 A stolen police helicopter used by a police officer yesterday to fire shots and throw grenades at the Venezuelan Supreme Court has been found. The helicopter was found about 50 miles northeast of Caracas. Authorities have not found the pilot that is seen on the pictures or video.

Pictures of the helicopter flying also surfaced on social media. The pilot later identified himself as Oscar Perez, who released a video speaking against the government. In the video, he is flanked by a group of armed men.

Authorities have not arrested anyone involved in the attack but the government did confirm that shots had been fired and that grenades had been thrown. No one was injured during the attack.

The helicopter incident yesterday has left many questions. It is unclear how the police officer was able to easily steal the helicopter and fly around the city for hours without being noticed by authorities. Witnesses say the helicopter flew around for about two hours. Shortly after the incident, the government confirmed that shots had been fired and that grenades had been thrown at the Supreme Court.

The attack has also left many questions as some are not sure that this was real. Some Venezuelans believe this was part of a plan to create a distraction. Others question how the helicopter was able to fly around for so long and reach the Supreme Court without any problems.

No one knows how much support, if any, Oscar Perez has from security forces but the attack comes as protests continue in the country. Protesters demand general elections but the government has said the vote on the constituent assembly will go on as planned. The protests have left more than 70 people dead and hundreds injured since they began months ago.