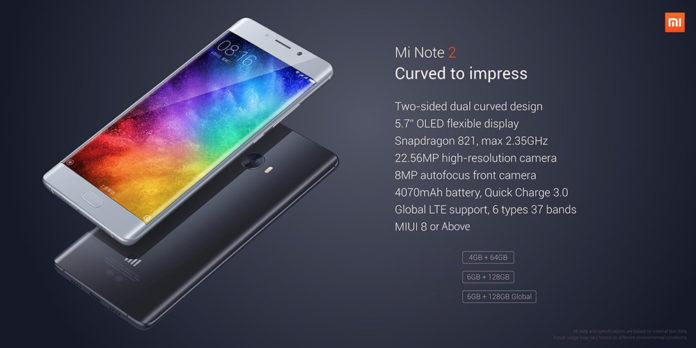 I’ve reviewed a fair few products from Xiaomi, ranging from earphones to lightbulbs to phones, and there seems to be an overarching theme with Xiaomi products; they provide great value for money, with beautiful aesthetics. The Xiaomi Mi Note 2 follows this theme, with a sleek body, ultra-fast specs, and a low price. Unlike the adventurous concept phone by Xiaomi, the Xiaomi Mi Mix, the Xiaomi Mi Note 2 employs a rather conventional design. It’s a standard tried and true design, and it’s a boring blend of “more power, more megapixels”. That’s not necessarily a bad thing – it shows the maturity of the smartphone.

As mentioned before, the design is rather conventional, but that’s not to say it looks bad, or that it’s boring. The entire front and back are covered by glossy glass, and it feels great in hand, thanks to it’s curved display. Although it’s good looking, it can be a bit slippery, since it’s made primarily of glass. It does look very similar to the Galaxy Note 7, which isn’t bad, since the Note 7 was a good looking phone. The back of the phone houses the 22.6MP camera, and along the top of the front is the 8MP front-facing camera. The screen covers most of the front of the phone, though not as impressive as the Mi Mix. It’s joined by a physical home button at the bottom, which doubles as a fingerprint scanner.

Like most Android phones, the right side of the phone houses both the volume and sleep/wake buttons, leaving the left side only for the SIM card. Overall, the Xiaomi Mi Note 2, though not as futuristic as the Mi Mix, is still a sleek looking phone. It has a conventional design, but it’s the most refined design Xiaomi has made to date.

The Xiaomi Mi Note 2 is the bestbuilt phone they’ve ever made. It feels very solid in hand, and it feels like a real flagship phone, like the iPhone 7 or Galaxy S8. Even though it’s comparatively cheap at $576.69, it feels every bit a flagship, and looks it too. I haven’t tested the durability, but since both the back and front are made of glass, I wouldn’t want to drop it on any hard surfaces. Along the sides of the phone are metal bands, and they too, feel premium and rigid. Overall, it’s solidly built, and there’s nothing to fault here regarding build quality

The display on the Xiaomi Mi Note 2 is big, but not that big anymore by todays standards. Even though it’s big, it’s outclassed by the huge screen size of the Samsung Galaxy S8, Xiaomi Mi Mix, and other bezel-less phones. It’s a 5.7″ screen (measured diagonally), but it has a relatively low resolution of 1921×1080. Although having a PPI (pixels per inch) of 382 is well above the iPhone 7, it’s still below the Samsung Galaxy S8’s whopping 571PPI. It’s an IPS display, and viewing angles are brilliant. Color range is also wide and vibrant, and it has a good contrast ratio of 100000:1. Overall, aside from the resolution, the display on the Xiaomi Mi Note 2 beautiful.

The Xiaomi Mi Note 2 is a flagship phone, and with it come flagship specs. The Xiaomi Mi Note 2 packs in an impressive 6GB of RAM and a Snapdragon 821 SoC. With these top-of-the-line specs, The Xiaomi Mi Note 2 should be able to breeze through anything you throw at it. With such high-powered specs, you’d expect it to guzzle battery juice, so Xiaomi has included an ample 4070mAh battery, which should keep it going for a good while. While it’s still smaller than the Mi Mix’s 4400mAh, it has a smaller display, so it should have similar battery life. Since the battery has such a high capacity, Xiaomi has included QuickCharge 3.0 capabilities on the Mi Note 2.

The Xiaomi Mi Note 2 comes in standard and global versions. While the standard version comes in 4GB/64GB and 6GB/128GB, the global version only comes in a 6GB/128GB configuration. The added extra on the global version is the inclusion of 37 bands, whereas the standard version only includes 19 bands. Other than that, all the connectivity options you’d usually expect from an Android phone are present on the Xiaomi Mi Note 2. The full specifications are as follows:
Global edition (6 types, 37 bands)
Standard/Premium edition (6 types, 19 bands)
Support CAT 13
Global LTE support

As is the norm with many Chinese phones, the Xiaomi Mi Note 2 has a dual-sim setup. This means that you can use this phone for both work and personal use, without needing to swap SIM cards. This a useful feature, and the internal SIM switching works flawlessly.

Like most flagship phones, the Xiaomi Mi Note 2 boasts a powerful camera. At 22.6MP, it’s one of the highest megapixel counts on any Android phone. Of course, megapixels aren’t everything, but overall the camera is good, even in low-light conditions. The front facing camera is also of decent quality, at 8MP, which is higher than most front-facing cameras. The rear camera is also capable of 4k 30fps Video, or 3k with electronic video stabilisation. Sadly, there aren’t any phones which can record 4k60fps video, and the Xiaomi Mi Note 2 can’t do it either.

As is the norm with Xiaomi phones, the Xiaomi Mi Note 2 runs Android OS. On top of that is Xiaomis own Custom ROM, MIUI. As I’ve mentioned in another review, MIUI is very similar to iOS, in that there’s no app drawer. It also follows a lot of the same design principles. If you’re an iPhone user, you’ll feel right at home with MIUI, but if you don’t like it, you can always install Google Now Launcher to at least turn the home screen back to normal.

The Xiaomi Mi Note 2 has top of the line specs. Regarding performance, the Mi Note 2 is flawless. With the global version with 6GB of RAM, it holds almost all apps in the RAM, since there’s so much of it. This means that apps open and close insanely quickly, and it means that the overall experience is snappy and quick. In day to day usage, there are no hiccups whatsoever, and everything is extremely quick. Even while heavy gaming, the GPU inside of the Snapdragon 821 chip doesn’t break a sweat, and all games run perfectly – and look great on the Xiaomi Note 2.

The Xiaomi Mi Note 2 has a large battery, at 4070mAh. Combined with the relatively low-resolution display, it’s a good indication that the Mi Note 2 will have a very good battery life. In real world usage, this equates to around 2 days if i use it lightly, and a full day if I use it very heavily. This is no mean feat, as by heavily I mean almost all day. Although it has a powerful SoC, the Xiaomi Mi Note 2 still has exceptional battery life. Compared to my iPhone 6s, it’s a world of improvement, and it’s one of the major reasons I would recommend the Xiaomi Mi Note 2 for power users.

In terms of performance as well, I’d recommend getting the 6GB/128GB version for future-proofing, as a few top spec phones already do have 6GB of RAM, as opposed to the normal 4GB. Both versions will be blazing fast now, but there may be a speed difference between the two models later on in it’s life-cycle. This would be especially noticeable when switching between apps (multitasking).

The Xiaomi Mi Note 2 is a stunner of a phone. It’s a flagship phone at a mid-range price, and it doesn’t seem to cut any corners. Xiaomi has a reputation for making great phones at low prices, and the Xiaomi Mi Note 2 is the perfect example of this. The Xiaomi Note 2 is an excellent all-rounder of a phone, and while it doesn’t have all the futuristic new features like a bezel-less display, it’s still a solid performer. If you’re looking for the ultimate evolution of the basic smartphone, this is it.

You can take advantage of all the current discounts, coupons, and flash sales by clicking here