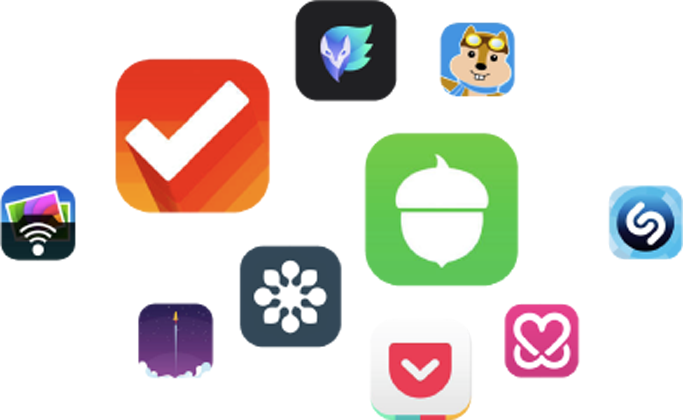 This is going to be a week of random reviews for me, as I try to figure out a new product line to review. It’s nice, a way to slow down, recharge the batteries and play on my phone too much. As luck would have it this review helps with that last one. AppMatch.com is a service designed to narrow down your app choices based on a few questions regarding who you are and what you want. I hadn’t heard of them until last week, which isn’t much of s surprise, seen as I tend to only use my phone for playing old video games and scheduling my day.

I went into the service blind, just to see what it would offer me, and I came away pleasantly surprised. The firm has cross referenced a lot of apps, and curated the best in each category so you don’t have to rely on inexpert opinion. It’s interesting, more and more companies are moving towards consumer scores, and mass feedback, like the app store itself, so to some AppMatch might seem like a step backwards. I completely disagree. I am guilty of slapping on a five star rating on a mediocre app just to skip the lengthy process of rating it badly, and I am fairly certain that there are plenty of others like me. Having a third party curate, a firm that lives and dies on selecting good and appropriate apps, is the perfect solution.

So let’s take a look at the company first. They are selling trust after all, and it would be nice to know a little bit more about them before I recommend them.

AppMatch.com was founded in 2015 under the name App Soulmate, with the goal of streamlining the search for useful apps.  The key players are Dana Breen, CEO and developer, COO Graham Langdon, and Daniel Wilkinson, the design lead. The team has expanded over the last couple of years, and is currently hiring as well. The most important aspect of their business hierarchy is the staff whose job it is to curate. Developers can contact Appmatch directly, and be fast tracked to the review process, but a look at the apps that make it onto Appmatch.com is enough to tell us that the only ones that make it through are the ones that meet their strict guidelines. Apps that are useful, end user friendly, with minimal ads that maximize your time away from the screen.


The first thing I did when I got the word to review Appmatch.com was go to the site. Seen as I use a desktop for most of my browsing this led me to a dead end. Not all that surprising, but you should know first that you can only make use of the service on a phone. There is still a lot of information on the site, which is nicely designed, and it’s where I got some of the information on the key players behind the scenes. The rest I found out via sleuthing. 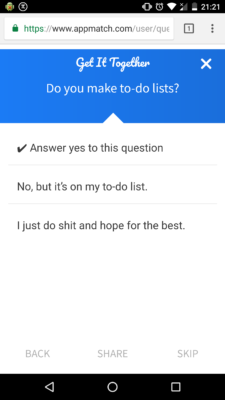 So, I picked up my phone and went to the site. The site is perfectly optimized for mobile devices, a crisp and clean look, with a big blue button asking you to click to start. The rainbow heart is a nice logo too, but looking to the right of aid logo will tell you that AppMatch.com is still in beta. The service as been going for over a year at this point, but I get that there is always something that can be improved. In fact I was met with one such issue immediately after clicking to start. The site is not particularly well optimized for Firefox for Android. It took a little longer than I would like to register inputs, and I know it isn’t my handset. I am using a Nexus 6, and while it isn’t top of the line anymore, it is still a reasonably high end device. Switching to Chrome fixed the issue, so it must have been more thoroughly tested on that browser. I have no idea how it runs on iPhone, what with not having one.

Once we hit start there are a few questions that Appmatch needs answered, and it is the core conceit of the service. Rather than simply sorting apps and letting you pick from a large list of curated sorted apps, they have gone with an almost 90s RPG questionnaire type deal. I am in love with the concept. Some of the questions are a little risque, some are mundane, and some are downright hilarious. Appmatch have done a great job crafting character with the service. Once you get past the initial questions you are presented with the algorithms findings, I didn’t expect much out of the introduction quiz, but it presented me with a nice little app that reminds me to drink water. I have issues with that, spend too much time drinking high caffeine beverages, so that was nice.

Once you are in you don’t have to sign up, you have access to all the quizzes, but I recommend you get an account. It will save your recommendations, and all the apps you skip too, and slowly build a profile, allowing it to recommend new apps as they come in. There are only around a dozen quizzes as of right now, but it seems to me that they have most of the trouble spots narrowed down. Finances, health, gaming, privacy, photography, learning and a few others. Each quiz takes only a few minutes to run through, but I only did the privacy, the finances and the work life ones.

The privacy quiz was interesting, I love the irony of the whole thing, but protecting customer data is listed as a core aim of AppMatch.com, held in as high a regard as finding the top notch apps themselves. It is something I can commend. I found a few useful apps out of that one. The work life one is focused on people who are unhappy with their job, so there was little it could do to help me. Seen as the service is in beta I expect to see the list expand as time moves forward.

Overall it only took me a minute for each one and I got four new apps out of the experience, ones that i expect to actually use too. Using the service was simple, and setting up an account for future perusal only took as long as typing in my details. I remember back in the back when you had to go and look at your email, reload, click on activation links etc etc. I am so glad that doesn’t happen nearly so often these days, but I digress. The team over at AppMatch have a real winner on their hands here.

I went into this with low expectations. I don’t use apps so much, as I said, I play old games and have a daily schedule. AppMatch has opened my eyes to the possibilities inherent to the mobile form factor. There are issues with the service, the optimization of the site on alternative browsers is chief among them. There are also less quizzes than I would like as well, but those are short term. At it’s core Appmatch.com is a streamlined service, with a sense of humor, which can only get better as time goes on.

Can’t believe I got to the end of the review without mentioning the Lichtenstein-esque pop art used at the end of the quizzes. Creates an odd retro juxtaposition, a bold and memorable look. Regardless, it all combines to create a brand, and one that sticks in the mind, highly recommend you give it a go.