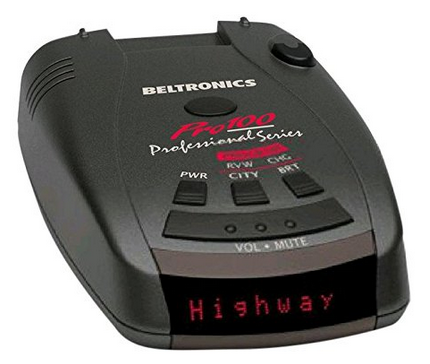 This is going to be my last Beltronics review, as the other models they have released are very hard to come by. Bit of a shame, as the old V6 was an excellent machine, and if you can find it cheap I could actually recommend that one. The Pro100 was supposed to be the bare bones build from the firm, a low cost option, and while it is pretty cheap, and it would have been a great choice five years back, the fact that we can get cheaper models, with more features, means that the Pro 100 is less appealing an option. To make it on the current market you need more than the basic features, you have to compete with Escort and Cobra, and they are both better equipped to meet the needs of the consumer.

I have had a blast with this series of reviews. When a new line comes down to me I get to spend a few weeks sourcing the models, looking at the market, and seeing who each firm are catering too. I also make a point of trying to broadly understand the tech involved, and research the history and evolution of the tech. With radar detectors that last bit was a little harder than usual, seen as the tech has deviated little in the last few decades. It surprised me at first too, but when I considered it, it made sense, I mean, radar waves are radar waves. What was more perplexing was the prices of the high end builds, if the core tech is the same as the lowest of models, why can some firms charge nearly ten times as much? Well, the brand is important, but the software is more so. The software has been evolving over time, taking the same input data and filtering it just right so as to increase range, accurately discern the source of the signals and learn where all the false signals are, thus making the day to day use of the expensive models much more enjoyable. The other side of it is integrations, adding GPS systems and databases, or app connectivity to provide real time updates on what is on the road.The Pro 100 doesn’t have any of that, and that is well reflected in the price.

Let’s move onto the review, first a look at the least important part of the model, the aesthetics. I maintain that it can be important, when you are caught between multiple models in the same price bracket, and the look of a build can tell us a little about the company who made it too.

The Beltronics Pro series as a whole is not very pleasing to the eye. Again, not a huge deal, but the core look does not inform the buyer of the build quality, which is a real shame. The feel of the builds is pretty good, but the fact that to look at it could have you confused as to whether you are buying a radar detector or a funny clock radio is a bit of a problem. That big LED display look so dated these days. I get that they are cheap to make, and the power draw is far smaller, but it is not exactly a competitive option. What’s worse is they use it in some of their more expensive builds too, so they aren’t passing the savings onto the consumer. The biggest head scratchier of the whole thing is the fact that Beltronics have the most aesthetically pleasing build on the market, with the GT-7. Pity then to not see that design flair here.

As stated, the build quality of Beltronics models tends to be fairly high. I like the weight behind the models, and they feel like they could take a bit of jostling on the road, always a concern. The buttons are large and easy to press, but that comes with some other issues. The mounting arm is fine, it will do is about as complimentary as I can be on it. The use of a click locking system, and standard suction cups, is a shame. There are third party options on the internet that you could buy, and the Pro 100 is cheap enough for that to be a fine option. Look for magnetic locks and sticky suction cup, they are as sturdy as you can get, and gives just a touch more peace of mind.

Unlike the Pro 300, the Pro 100 is not compatible with the wonderful Smart coil cable. Not seeing it here is a real shame, as it removes one of the safety concerns I have. In order to mute false alerts with this build you have to actually loan forward to the windshield, and that is a hazard. With the smart coil you have the mode switch button and the mute button handy. There are only two city filtering modes, so picking the one that works better is a bit of a toss up for a few weeks after purchasing. The on board filtering is about as good as you can get at this particular price point. No model, even the most expensive models, are able to perfectly filter all static and false signals. The issue is that there are other ways to remove the false signals, with GPS integration, app integration and auto mute options. There is VG1 mode, for protecting against detector detectors.If you go with the Pro 100 the only advice I can give you is to get to know your local area, know what bands tend to be in use, and deactivate the bands you don’t need to worry about. X band is being phased out in many areas.

The lack of app integration is a glaring omission. When you realize that the Pro 300, a build a like in pretty much every other way, is able to connect to the Escort Live app, the fact that we cannot do it here is a real shame. Adding an app allows any radar detector to increase its effective range, adds more filtering, and can turn the lowliness of models into real contenders. So fundamental is the app that my current top ten short list has two legacy Cobra builds in it. Now, you can buy a subscription to any of the apps out there, and simply look at the updates, but you don’t get access to any of the other features. With the cheaper builds that is a viable option.

Every radar detector firm is pushing their answer to the evolving tech of speed detection. The switch from radar guns to LIDAR guns is slow, and likely to never be completed, but that doesn’t mean we can ignore LIDAR. The answer used here, and with every other model, is the Laser eye, a laser detection system. The issue from my perspective is the fact that LIDAR is a shorter burst system with less refraction. With regular radar, even the pop variety, there is a far wider band used, and it bounces everywhere. You can pick it up with a Pro 100 several miles from point of origin. With LIDAR you tend to only pick it up within line of sight, and sometimes not even then. Generally the laser eye goes off after you are hit, rendering it a touch useless. This is not a Beltronics issue, it is industry wide. I imagine it will get better over time, but right now I would advise you not rely on it. There is another option, but it comes with a few issues of its own, and I intend to discuss it in the legal section.

The core feature set is here, and the range of signal pick up is perfectly fine. the issue is the lack of modern features and integrations. It makes the asking price make sense, but right now you can get better models at lower prices. Five years back this would have been a real contender, but right now it really isn’t. A shame, Beltronics models are high quality, and tend to last a long time.

It’s important to know the law regarding radar detectors should you decide to buy one. There are really only three pieces of legislation that you need to keep in mind. Non commercial vehicles are good to go in forty seven states, only Virginia, Washington DC, California and Minnesota have alternative rules. If you are driving a vehicle for work then it is illegal to use a radar detector at all. In both Washington DC and Virginia they are illegal in all vehicles, and in California and Minnesota there are restrictions on what you can place on the windshield. Finally, they are prohibited on US Military Bases.

The Beltronics Pro 100 is actually priced fairly well, and where it not 2017 I would be very impressed by it. You can usually expect to pay around $150. Give or take $20. I have found it online at the lower end, and in the big stores at the high end. I am torn on this. The price is affordable, and that is more than can be said for the majority of the Beltronics models, but it is still not low enough, considering the feature set, to be a viable option today.

The Beltronics warranty is listed as 1 year of limited coverage. I review a lot of product lines, and read a lot of warranties, so I am good at spotting the good ones. The one year of limited coverage is standard in the radar detector market, so while I would like to see multi year warranties, covering everything, I cannot chastise Beltronics for this. What I can do is point out that the value in a warranty is dependant on the stability of the company offering it. Beltronics online presence is less than amazing. Go to the site and browse around. Misspellings, missing product pages, the site is a bit of a mess. It is enough for me to call the value of this warranty into question.

This was better than usual, but still a bad section in general. First, know the law, know where you stand, and keep yourself covered. When it comes to owning a radar detector that is one of the best pieces of advice I can give you. The price here is low, true, but there are better priced items in the market today, and that warranty is the nail in the coffin.

The Pro 100 is fairly far from a good build. The quality might be up to the usual Beltronics standard, and the core features do work, but the lack of bells and whistles with their builds has become a major sticking point for me. I review a lot of these things, and when I see a company try to sell a model at this price point I expect to be wowed, at least a little. The biggest issue is the lack of ap integration, and the lack of the smart coil. If Cobra can sell both of those things, alongside a model at half the price of the Pro 100, then Beltronics can step up to the plate.

Another pass from me. Beltronics could have a whole product line of amazing radar detectors, if they managed to price them better, and unlock the features that I know this model has under the hood.