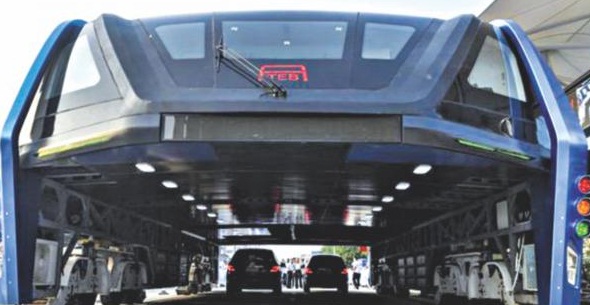 The Transit Elevated Bus (TEB) is gone and its tracks have been removed but authorities continue their investigation as it is believed that the company may have raised money illegally for the project.

The bus made news around the world when it was first tested in 2016. But the testing was the only thing that the country ever saw as the bus was abandoned shortly after. The project was seen as a solution to traffic and pollution problems in the country but that changed in just a few months. The bus went from being a good solution to just taking space on the road.

Last month, the city announced the tracks would be removed from the road. The bus was recently towed away by a truck. Police launched an investigation shortly after the announcement by the city. The company behind the project has been very quiet for a few months now and reports say even the official website for TEB has been removed. Authorities are now investigating to find out how the company acquired the funds and now think the project was a scam.

30 people were detained on Sunday and recent reports say authorities might be trying to retrieve and return the funds. According to a report seen by Quartz on social media site Weibo, the company raised around $1.3 billion last year. Recent reports say more than 70 people have filed complaints to get their money back.

The Transit Elevated Bus (TEB) was taking half of a major road before it was removed a few days ago. Authorities did not reveal where the bus was taken after it was towed away but the removal is good news for residents, who had complained that the abandoned project was slowing down traffic.

The bus, which was designed to carry 300 passengers, had its inaugural test run in late 2016. But the project never really continued after that, despite the big plans announced in early 2016.

TEB is now a thing of the past but the project is still being talked about as it is now part of a police investigation, which has already led to the arrests of 30 people.