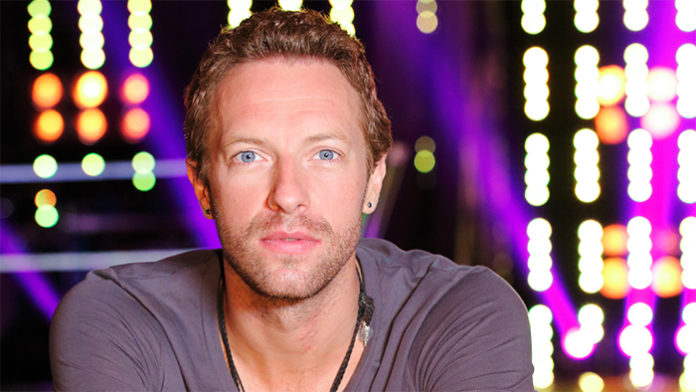 Hailing from Whitestone, England, Chris Martin is best known as the co-founder of the rock band, Coldplay. Alongside Johnny Buckland, Phil Harvey, and Guy Berryman, they released their debut album titled, Parachutes in 2000. A huge success, it quickly rocketed them towards fame and stardom.

Born on March 2, 1977, Chris Martin is the oldest out of five siblings. The son of a music teacher, he developed an interest in the art form early on in his life. As a young teen, he went to Exeter Cathedral School, after which he attended a boarding school in Dorset. After completing high school, he attended University College London, where he studied Ancient World Studies.

After befriending Johnny Buckland during their orientation week, the two formed a band called Pectoralz. A few years later, their line up was complete with the addition of Guy Berryman, Phil Harvey, and Will Champion. In 1999, the crew, now renamed Coldplay, landed a five album contract with the German-British record label, Parlophone.

Ultimately, it was his work with Coldplay that brought him fame. After releasing an EP in 1999, the group achieved worldwide attention with the release of their debut studio album, Parachutes in July 2000. Produced by Ken Nelson, it gave rise to four hit singles, Don’t Panic, Trouble, Shiver, and Yellow.

Showered with praise, it quickly proved to be a commercial success. Not long after its release, Parachutes shot to number one in the UK; an international hit, it also charted in a number of different countries including the United States, Australia, Canada, Norway, Sweden, to name a few. A solid debut, the album has sold over 14 million copies world wide to date.

Two years after breaking into the music scene, Coldplay dropped their second album titled, A Rush of Blood to the Head on August 26, 2002. Their most successful album to date, the 11-track project won two Grammy Awards for Best Alternative Album and Record of the Year in 2003 and 2004 respectively.

One of the best-selling albums in the UK of all time, A Rush of Blood to the Head topped the UK Albums Chart upon the first week of release. Critically acclaimed, it gave rise to the singles, God Put a Smile Upon Your Face, The Scientist, Clocks, and In My Place, all of which found a spot on the record charts. A chart topper in several countries around the world, it has since gone platinum nine times in Britain.

In June 2005, Chris and the boys released their next studio album, X&Y. Despite difficulties that arose during its development process, it became yet another success for the group. Featuring heavy electronic influences, it boasted thirteen tracks including White Shadows, Speed of Sound, Talk, Fix You, and The Hardest Part, all of which were later released as singles.

The winner of a BRIT Award for Best British Album, it topped countless record charts all over the world, including the Billboard Top 200 in the United States. Certified 9x platinum by the BPI, more than 15 million units have been sold around the world as of 2017.

Three years after their last release, Coldplay came out with Viva la Vida or Death and all His Friends in June 2008. Their fourth album together, it contained ten tracks including Cemeteries of London, Lovers in Japan, Strawberry Swing, Violet Hill, and Lost!, among others. Another international hit, it entered music charts at number one in 36 different countries. The album has since achieved 5x platinum in Britain, and 2x platinum status in the United States.

Since then, they’ve released three additional albums including Mylo Xyloto (2011), Ghost Stories (2014), and A Head Full of Dreams (2015). Although they didn’t reach the same level of success as their previous titles per se, they still managed to chart numerous music charts around the world.

Since Coldplay’s debut in 2000, Chris and the crew have embarked on several tours across the world. In fact, they’re currently on the roads as we speak, for their 2017 A Head Full of Dreams Tour.

Aside from his work with Coldplay, Chris has written songs for many artists including Jamelia, Nelly Furtado, Natalie Imbruglia, Tim McGraw, and Kanye West. Some of said tracks include All Good Things (Come to an End), Homecoming), See It in a Boy’s Eyes, Me and Tennessee, and Beach Chair.

As well, he has contributed vocals to Ron Sexsmith’s Gold in Them Hills, Bruno’s Dove of Peace, Jay-Z’s Most Kingz, and The Flaming Lips’ I Don’t Want You to Die.

Chris Martin on Television and Film

Like many artists, the 40-year-old has appeared on both the big and small screens on several occasions. In 2004, the vocalist made his movie debut in the horror comedy film, Shaun of the Dead; he later returned to Hollywood as a cameo in the mockumentary, Bruno (2009).

On December 5, 2003, the vocalist married American actress Gwyneth Paltrow. The two eventually welcomed a daughter into the family named Apple Blythe Alison Martin on May 14, 2004.

After ten years of marriage, the couple separated in March 2014; their divorce was later finalized in July 2016.

In December 2012, he took part in the charity 12 12 12 Concert in which the proceeds went towards the victims of Hurricane Sandy.

Then in 2014, he became a member of the charity group Band Aid 30, with whom he helped to fundraiser for the Ebola crisis in Africa.

In total, the rock band has received 65 industry awards from over 200 nominations. 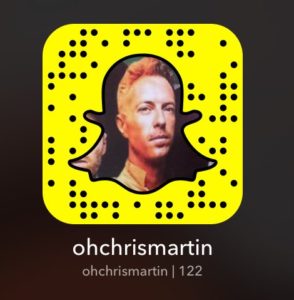 If you would like to add Prince Royce onto your Snapchat account, you can do so by clicking here.

Unfortunately, Chris Martin is not on Instagram. Having said that, you can view photos/videos of his band on Coldplay’s account at @coldplay.

If you’d like to listen to Chris Martin’s work on Youtube, you can visit Coldplay’s official VEVO channel at @ColdplayVEVO. Since they first launched their page in 2010, they’ve amassed well over 9.6 million subscriber and over 5.9 billion lifetime views.