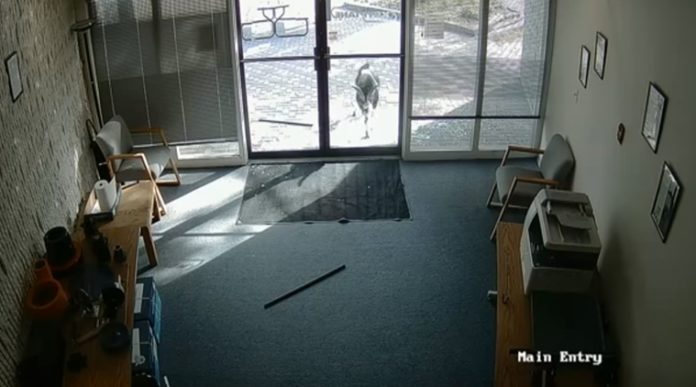 Security footage from inside a Colorado office showed that it wasn’t a break-in that left the glass doors completely destroyed. The glass doors were actually broken by a goat, which left behind its group to destroy the entrance of the office.

The employees arrived on Monday morning to find the office without the glass on its doors. They first thought it was a break-in but nothing in the office was missing, so security footage was checked. The video shows a goat looking at the glass door before it starts hitting it. The glass panel falls off the door and the goat runs away. Other goats are also seen running in the background. The destruction of the glass panel wasn’t enough for the goat as it quickly comes back for the other door. The goat first tries to destroy one of the windows but it gives up and goes to the glass door.

After several attempts, the goat breaks the entire glass panel of the second door. The goat watches the destruction for a few seconds before walking away. The goat never entered the office and employees think it broke the glass because it was seeing its own reflection. The goat put its biggest effort on the second door, which it hit several times.

The goat was part of a group that was walking around Louisville. Three other goats are seen during the video but they weren’t interested in destroying the glass doors. The police department did tell The Two-Way that the goat’s owner was in contact with the office.

The video of the goat destroying the glass doors is currently #34 on the Trending section of YouTube. The video has more than one million views and 8,000 likes. Here is the video: