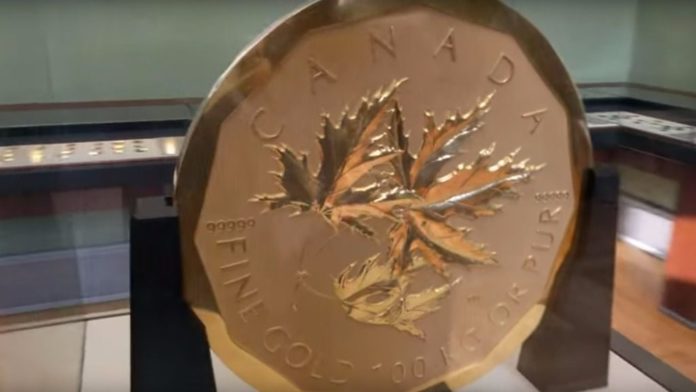 Authorities in Germany have arrested several people suspected of being involved in the heist of a gold coin worth millions of dollars. The 221-pound Big Maple Leaf gold coin was stolen from a Berlin museum back in March.

Police said on Wednesday that they are conducting searches and executing arrest warrants in Berlin over the heist at the Bode Museum in March. A spokesperson confirmed that the suspects arrested are part of a group known for drug smuggling and other crimes. Authorities reportedly tracked the suspects by using DNA evidence. According to reports, four suspects were arrested by police on Wednesday. The coin was not found in any of the homes.

Big Maple Leaf Coin Has Not Been Found

Authorities launched an investigation shortly after the heist but have not found the gold coin. Investigators said after the heist that it was unlikely that the coin would ever be found since the thieves can easily melt it. The 221-pound gold coin has gold purity of 99.99 percent and is one of five gold commemorative pieces issued by the Royal Canadian Mint in 2007. The piece was stolen even though there were security guards in the museum at the time.

The thieves didn’t come up with a big plan to steal the gold coin. According to authorities, they entered the museum through a window. The used a ladder, which they placed on the elevated tracks of a railway, to reach the window. Authorities believe at least two thieves entered the museum and smashed a bulletproof cabinet to get to the coin. The thieves stole the coin without being noticed by security guards inside. Authorities say the thieves used the same route to get the coin out of the museum. The thieves then used a wheelbarrow to carry the coin.