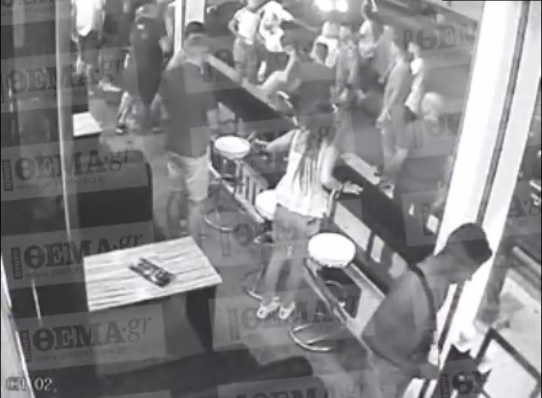 A video taken by a security camera shows the brawl that left 22-year-old American tourist Bakari Henderson dead. Henderson was at a bar in Greece when a brawl broke out. Local media reports said the brawl began over a selfie dispute but Henderson’s friend has said that is not true.

The video taken by a security camera shows a group of people going after Henderson. According to authorities, at least ten people followed Henderson out of the bar. A bouncer and employee have been accused of leaving Henderson unconscious on the street. Authorities said Henderson suffered severe head injuries.

The brawl happened on Friday and according to one of Henderson’s friends, who was there at the time, the first reports are not true. Local media first reported that the brawl began over a selfie dispute with a waitress, which angered one of the employees. Henderson’s friend, who spoke to CBS News, said that it began when Bakari and a few other friends placed their drinks at the side of a table where two other men were sitting. The men allegedly took the beers, smashed the bottles and held the broken bottles as weapons.

The bouncer and another employee have been arrested after being accused of beating him unconscious. Police have arrested a total of eight people, who are now facing voluntary manslaughter charges. Two days ago, police issued an arrest warrant for a ninth suspect they believe was involved in the brawl. Six of the suspects are said to be Serbian citizens while the other two are Greek and British.

Bakari Henderson graduated this year and was visiting the country for a photo shoot while preparing to debut a new fashion line. A GoFundMe page created for the family has raised more than $40,000 since Saturday. The money raised will help cover transportation and funeral costs.